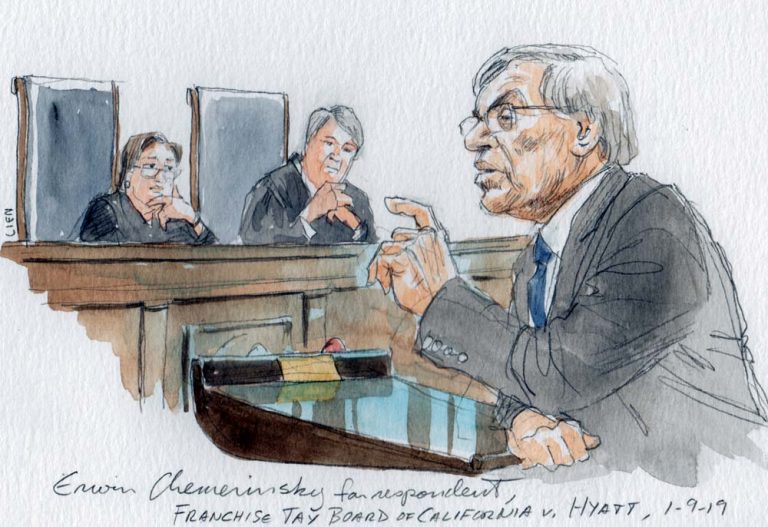 The U.S. Supreme Court heard arguments in a case this past week that could alter the ability of a private citizen to seek justice in his state’s courts when public employees from another state abuse their powers and step over the line of common decency. The case is titled Franchise Tax Board of California v. Hyatt.

It all started in 1993 when a tax auditor for the Franchise Tax Board of California read a newspaper article about how wealthy California computer chip inventor, Gilbert Hyatt, had recently moved to Nevada, which, unlike California, has no income tax. The auditor investigated and concluded Hyatt had not moved to Nevada as early as he claimed. The tax board said Hyatt owed California nearly $15 million in taxes and penalties.

Hyatt eventually sued the tax board in Nevada courts for invasion of privacy, intentional infliction of emotional distress, fraud, abuse of process and breach of confidential relationship. According to The Wall Street Journal, California’s lead auditor became obsessed with Hyatt and vowed to “get that Jew bastard.” The auditor reportedly traveled to his Nevada home and “peered through his windows and examined his mail and trash,” as well as pressed estranged family members to testify against him.

A Nevada jury found for Hyatt and awarded him $85 million for emotional distress, $52 million for invasion of privacy, $1 million for special damages for fraud and $250 million in punitive damages. Because Nevada has a law limiting the liability of its own state agencies the award was later reduced to $50,000.

In a strange case of role reversal, the argument now before the U.S. Supreme Court being pressed by California is that one of its earlier opinions should be overturned. That case is known as Nevada v. Hall. California residents brought suit in a California court for damages when a state of Nevada-owned vehicle on official business collided with the Californians on a California highway. The California courts assessed damages of more than $1 million against Nevada.

The U.S. Supreme Court in 1979 ruled that while states have sovereign immunity from being sued in their own courts, a state is not constitutionally immune from suit in the courts of another state.

In yet another twist, the attorneys general of 45 states, including Nevada’s then-Attorney General Adam Laxalt, have filed amicus briefs asking that Nevada v. Hall be overturned.

“The time has come for this Court to overrule its decision in Nevada v. Hall … an outlier among this Court’s consistent protection of the States’ sovereign immunity,” the brief argues. “Although this Court has held that States are immune in their own courts, in federal courts, and in federal administrative agencies, Hall allows a State to be haled before the courts of any other State and be forced to pay money judgments issued by those courts. This affront to the States’ sovereign dignity and financial resources is contrary to the Constitution’s structure and history and should be definitively rejected. For this reason, a total of forty-five States have joined briefs arguing that Hall should be overruled.”

During oral arguments this past week, California’s attorney argued that the “writings and speeches given by Hamilton, Marshall, and Madison” supported his view that states should be immune from legal action in the courts of other states.

Again according to the Journal, liberal Justice Sonia Sotomayor responded, “It’s nice that they felt that way, but what we know is they didn’t put it in the Constitution. And so we talk a lot now about not relying on legislative history, but relying on the plain text.”

Conservative Justice Samuel Alito added that “we are all always very vigilant not to read things into the Constitution that can’t be found in the text.” Justice Brett Kavanaugh asked why something the states supposedly regarded as so important would not have been addressed in the constitutional text.

Where is a citizen to turn when public officials flout the law and run amok? Does not state sovereignty include the right and power to protect its own citizens from agencies in other states when they are extorted and defrauded? You know what they say about absolute power.

3 comments on “Newspaper column: States should not be granted absolute immunity”