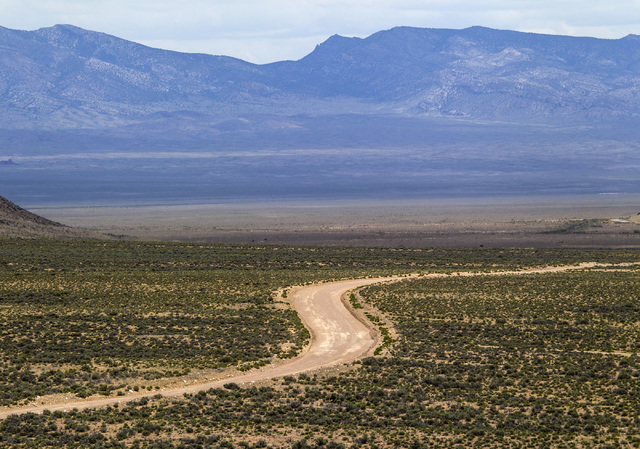 Rep. Ruben Kihuen has unleashed a diatribe against President Trump over his executive order telling the Interior secretary to review national monument designations for the past 20 years, saying Trump doesn’t give a damn about Nevadans.

Democrat Kihuen flatly stated that most Nevadans support public lands and their permanent protection and criticized Trump for calling recent national monuments — such as the 1 million-acre Gold Butte and Basin and Range national monument designations Obama created in his final year in office — a “massive federal land grab.”

“What would be funny if it wasn’t so sad is that President Trump is doing exactly what he’s complaining about: imposing Washington, D.C.’s ‘wisdom’ on the people of Nevada,” Kihuen writes. “Instead of ‘returning control to the people’ as he has advocated, he’s side stepping the desires of Nevadans. Instead of being part of the conversation, Nevadans are told to shut up and sit down.”

This ignores the fact Interior Secretary Ryan Zinke is currently in Arizona visiting the Bears Ears National Monument to begin what he is calling a listening tour on the topic of the more than two dozen national monuments created in the past 20 years.

This also ignores the fact that many accurately described the creation of Gold Butte and Basin and Range monuments as sops to one man, now-retired Nevada U.S. Senator Harry Reid.

Congressman Cresent Hardy — who Kihuen defeated to represent the 4th Congressional District, home to both monuments — complained, “We need to be sure local communities don’t have their concerns ignored by politicians eager to leave a legacy or pull favors for their friends by setting aside huge tracts of land. Nevada’s rural county economies are particularly sensitive, and any decisions that affect ranching, recreation or other types of land use activities should have as much local input as possible … but at the moment, they do not. Legacy building in the twilight of one’s career shouldn’t be the driver of our nation’s public land management.”

Congressman Mark Amodei, who represents northern rural Nevada, said in an interview, “One of the paybacks for Senator Reid being one of the administration’s backstops for six of their eight years is the monument thing. … Why the hell can’t you go through the public process?”

Then-Nevada Rep. Joe Heck said at the time, “President Obama often says ‘we are stronger as a nation when we work together.’ Apparently that rule does not apply to public lands issues when it involves his political allies. The Basin and Range Monument designation goes well beyond the intention of the Antiquities Act which limits parcels reserved by the President to the ‘smallest area compatible with the proper care and management of the objects to be protected.’ It is beyond belief that an area larger than the state of Rhode Island is the smallest area compatible with proper care and management of this land.”

Sources confirmed Reid’s role to the Washington Post: “It is only due to Harry Reid that this is getting done.” When told it was controversial in Nevada, Obama replied, “I don’t care. I want this done.”

Kihuen further accused Trump of looking out for businesses instead of Nevadans. “Now, President Trump is bucking years of precedent by threatening to revoke the protected status for these designations,” he writes. “Who is President Trump really looking out for? Perhaps it’s big oil and gas who want expanded drilling rights. Or mining companies that seek to extract resources from these federally held areas.”

Or perhaps Trump is sending out the Interior secretary to ask people who actually live near those monuments whether they might like the jobs those businesses create and the tax revenue they generate.

Lest we forget, Kihuen won the 4th Congressional District — which includes part of northern Clark County, the southern part of Lyon County and all of White Pine, Nye, Mineral, Esmeralda, and Lincoln counties — by about 10,000 votes but won in Clark by about 24,000. Hardy won every other county with margins of 2-to-1 or more.

Kihuen further claims, “The Nevada legislature recently passed a resolution expressing support for Basin and Range and Gold Butte. It can’t be any clearer, Nevadans across party lines have made their voices heard. They want these monuments.”
Actually, the resolution has only passed the Assembly and the vote was largely along party lines, with urban Democrats favoring it and rural Republicans opposed. Across party lines?
Who are you going to believe? Kihuen or your lying eyes?