A number of Nevada counties have passed Second Amendment sanctuary resolutions in response to state lawmakers passing a “Red Flag” law in 2019 that would allow persons accused of being a potential danger to themselves or others to have their firearms confiscated by order of a judge.

But rather than threatening to flout the law, the better route is the one taken by Elko County commissioners recently and that is to challenge the law in the courts. The commissioners voted to join a lawsuit filed in December by attorneys for NevadansCAN (Citizens Action Network) that argues the “Red Flag” section of Assembly Bill 291, which was passed on a near party-line vote with Democrats in favor and Republicans opposed, is unconstitutional because it violates the right to due process and the right to keep and bear arms — as guaranteed by the Second Amendment of the U.S. Constitution and the Nevada Constitution, which states, “Every citizen has the right to keep and bear arms for security and defense …”

He was quoted as saying, “Let’s enforce the laws that we have which are reasonable instead of enacting more laws which are unconstitutional. … A great president once said this country cannot be defeated in combat, but it can be defeated within. Right now this country is crumbling, slowly, due to weak-minded politicians and lawmakers who push unconstitutional laws for personal gains and to fill their pockets.”

He received several rounds of applause the newspaper reported.

The litigation appears to have sound legal footing due to a recent unanimous Nevada Supreme Court ruling. The court found that gun ownership is such a fundamental right that it cannot be taken away merely by a judge’s ruling, opining that a person charged with misdemeanor domestic battery is entitled to a trial by jury, because the state Legislature in 2017 enacted a law saying someone convicted of such a crime could have their right to keep and bear arms denied.

The U.S. Supreme Court has held that only those persons charged with a “serious” crime are entitled to a jury trial. The unanimous Nevada opinion written by Justice Lidia Stiglich states the change in state law to prohibit firearms possession by someone convicted of domestic violence effectively increases the “penalty” and makes the crime “serious” rather than “petty.”

“In our opinion, this new penalty — a prohibition on the right to bear arms as guaranteed by both the United States and Nevada Constitutions — ‘clearly reflect[s] a legislative determination that the offense [of misdemeanor domestic battery] is a serious one,’” Stiglich wrote in a case out of Las Vegas.

The NevadansCAN lawsuit declares, “This (“Red Flag”) law makes mincemeat of the due process of law, will endanger law enforcement and the public, and is a tool for stalkers and abusers to disarm innocent victims. Empirical data is available that nearly a third of such orders are improperly issued against innocent people, in states with experience of the operation of such a law.”

Proponents of such laws often cite the Oct. 1, 2017, mass shooting that left 58 country music concert goers dead in Law Vegas as justification, but neither this “Red Flag” law nor the recently enacted tougher background check law would have prevented that tragedy.

It must be overturned and litigation is the proper route to do so. 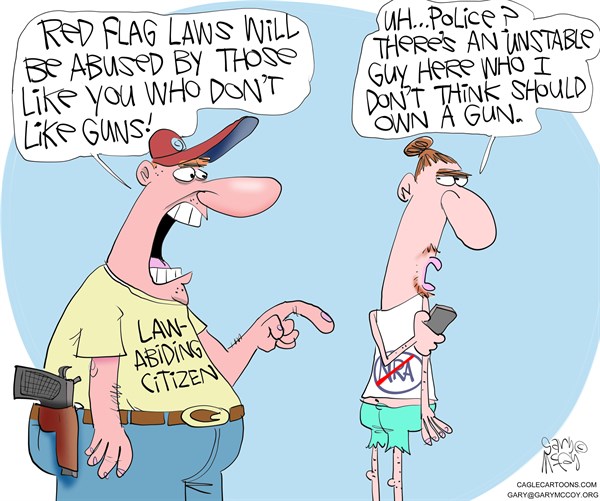