Seldom is seen such disparate accounts of the same event.

Today’s morning newspaper and its inert insert both carried reports about a court ruling Wednesday. The morning paper’s lede was about a Clark County judge staying a final ruling in the state litigation between the two newspapers until a federal court resolves an antitrust suit filed by the owner of the insert. The final paragraph of the insert’s story mentions this fact.

Seldom do both papers cover the same event. In fact the insert seldom covers hard news at all, except in its online version and most of that is about entertainment, sports or crime.

The papers combined printing and business operations in 1989 under the Newspaper Preservation Act of 1970, which allowed newspapers to avoid antitrust laws while preserving what the law saw as “a newspaper press editorially and reportorially independent and competitive …” by keeping a failing newspaper from going out of business.

At first the failing paper was printed in the afternoon, but later it was converted into a 6- to 10-page insert when the so-called joint operating agreement (JOA) was renegotiated and the contract extended to 2040. The insert’s owner was to receive a share of the morning paper’s profits, which apparently have been near zero of late.

For the past two years the two have been fighting it out in the courts with the morning paper saying the insert has failed to live up to the intention of the Newspaper Preservation Act and the JOA should be terminated. A morning paper editorial explained its suit by saying, “We are asking a court to rule that the Sun has not met a contractual obligation to produce a high-quality metropolitan print newspaper.”

The editorial went on to charge:

The Sun would be free to have someone else print, sell and distribute their newspaper, if they wish. The Sun has a website loaded with breaking news and timely features, as well as sister publications that are filled with content produced by Sun staff. The vast majority of this content never appears in the printed Sun edition, anyway.

And that’s a major reason why we’re bringing this court action. In our opinion, the Sun’s print edition is a stale combination of dated wire service stories and columns packaged around a couple of staff reports and photos that are sometimes a week old.

The insert countered with an editorial under the headline: “The Sun refuses to kneel before Sheldon Adelson — and you should too.” It declared, “It is a desperate move and behind a tissue of dishonesty lies the real motive: the R-J longs to silence the Sun and be the only voice in daily newspapers in this community.” Casino owner Adelson’s family bought the morning paper in late 2015.

Coverage of this internecine conflict is as “competitive” as the two papers have gotten in years.

According to Wikipedia, there are only five JOAs left, while two dozen JOAs have been terminated. 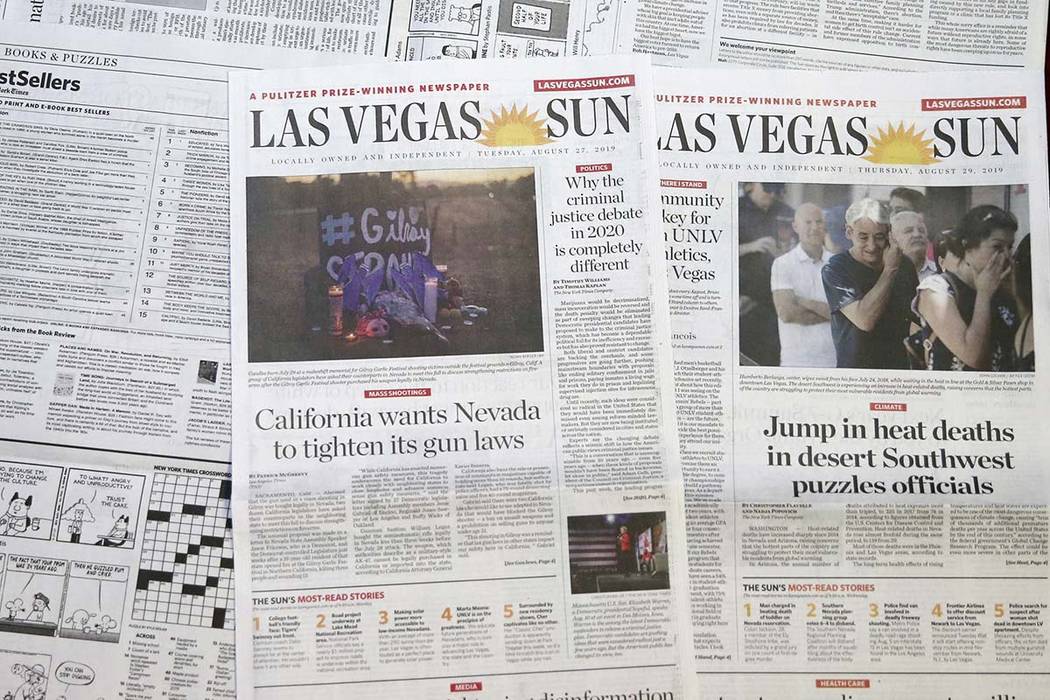