Don’t you love it when irresistible reality smashes into immovable liberal fantasy? It creates a critical mass of illogical proportions that blows the mind.

On the pages of the Las Vegas Sun today is reprinted a four-day-old editorial dismissing all the Republican tax reform plans out of hand. (The paper has yet to print its online editorial questioning the state’s “most conservative newspaper” editorial about a polluting solar thermal plant.)

The Timesmen (and Timeswomen, to be politically correct) assert that the proposed “big and broad cuts” mostly benefit the wealthy — with their customary knee-jerk class envy without any inkling that the wealthy might spend that  windfall on cars, yachts and other luxuries made by American workers.

“All of these candidates deny fiscal reality,” the editorialists insist, with fiscal and historic blinders firmly in place. “In the next 10 years, revenues will need to increase by 40 percent simply to keep federal spending even, per capita, with inflation and population growth. Additional revenues will be needed to pay for health care for the elderly, transportation systems and other obligations, as well as for newer challenges, including climate change. And interest on the national debt will surely rise because interest rates have nowhere to go but up.” They conclude taxes have to go up. It is inevitable. It is dogma. It is in stone.

To begin, why must revenues increase? Can spending never be cut? Secondly, they ignore the concept of elasticity and dynamism. Letting people keep and spend their own money can and does grow the economy and has done so in the past.

The IBD columnists point out that working people currently bear 80 percent of the tax burden in the form of reduced wages that would otherwise be paid. Of Cruz’s plan, the writers note, “The Tax Foundation scores the 16% business flat tax as raising $25.4 trillion in federal revenues over the next decade, which would account for 71% of all federal revenue.”

Meanwhile, the Tax Foundation shows every GOP presidential candidate tax plans so far announced would increase GDP by more than 10 percent, wages by at least 6.5 percent, jobs by 2.7 million to 5.8 million, and only slightly reduce federal revenue — except Rand Paul’s plan, which would actually grow tax revenue. 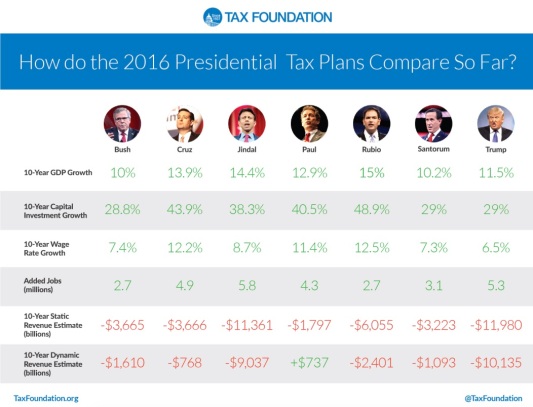