EPA administration Scott Pruitt said today his agency is ending the practice that has come to be known as “sue and settle” — in which self-styled environmental sue the government over some feigned failure to protect something or stop some viable economic activity and the government caves without putting up a fight.

“We will no longer go behind closed doors and use consent decrees and settlement agreements to resolve lawsuits filed against the Agency by special interest groups where doing so would circumvent the regulatory process set forth by Congress,” Pruitt said in a statement. 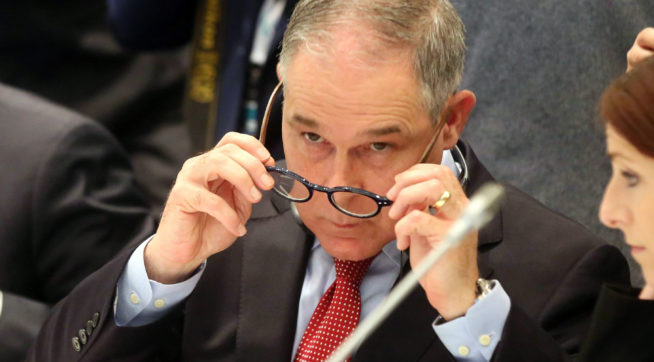 As the attorney general of Oklahoma, Pruitt was involved in many such lawsuits.

Pruitt said that when a settlement is being considered the EPA will discuss the matter with affected states and communities.

Back in 2014 we lamented the “sue and settle” practices of the Obama administration.

The previous fall, the the U.S. Fish and Wildlife Service designated as threatened — under the terms of the Endangered Species Act — the bi-state greater sage grouse found along the northern California-Nevada border, supposedly a distinct population segment of about 5,000 remaining birds, even though the birds are legally hunted in both states.

In the spring of 2014 the FWS designated as threatened the lesser prairie chicken, which are found in Texas, Oklahoma, Colorado and New Mexico and Kansas.

Under the settlement, FWS was also to decide whether to list the greater sage grouse, which are found in 11 Western states, by September 2015. What do you think the odds are? Fortunately, that never happened, though the Obama administration issued a massive and draconian set of land use plans meant to protect the chicken-sized birds. Recently, Pruitt’s EPA rescinded those plans

During the four decades of the Endangered Species Act less than 2 percent of listed species have been delisted. Once on the list they are on the list forever.

Pruitt appears to be correcting many of the errors of his predecessor.