One can’t argue with his premise that Gov. Brian Sandoval did not live up to his election promises. Instead, he shepherded though the largest tax increase in state history to pay for the highest budget; pushed through the commerce tax on businesses; expanded Medicaid under ObamaCare; allowed illegals aliens to get driver’s licenses; and bailed on school choice.

But Root’s solution is:

Find me candidates who believe in real conservative principles and who know how to proudly and loudly sell that message, and I’ll show you a Nevada that is painted Republican red again. That’s a Christmas message of hope for the Nevada GOP.

Well, they don’t get any more conservative than Bob Beers, who lost the race for state treasurer to an unknown, much less-qualified Democrat. The same could be said for Ron Knecht, who lost his controller re-election bid, and Wes Duncan, who lost his bid for attorney general. And, yes, Adam Laxalt had said he would try to repeal the commerce tax and as attorney general defended conservative principles and values. He lost to a tax-loving Democrat. We’ll skip over tax-hiker Michael Roberson. 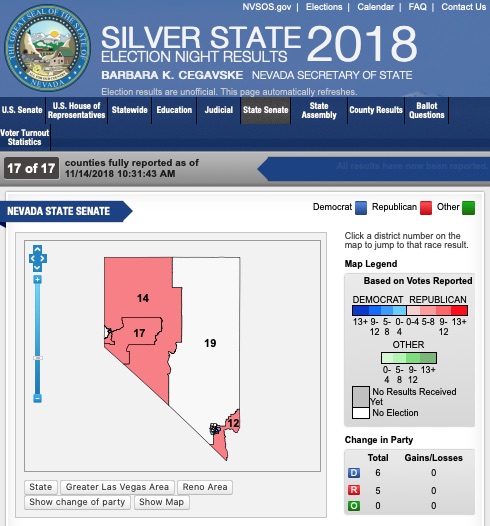 Republican Sen. Pete Goicoechea is the District 19 incumbent and was not up for re-election this year.

The blue Clark County tail wagged the red Nevada dog in this past week’s election.

For example, in the race for the U.S. Senate, Democrat Jacky Rosen carried only Clark and Washoe counties, while Republican incumbent Dean Heller won every other county handily. In the more heavily unionized, redistribution-favoring and thus Democrat-leaning Clark and Washoe, Rosen gleaned 55 and 50 percent of the votes, respectively. Whereas, for example, in Elko County Heller netted 76 percent of the vote, 72 percent in White Pine, 79 percent in Lincoln, 75 percent in Esmeralda, 63 percent in Storey, 72 percent in Churchill, 79 percent in Lincoln and a whopping 84 percent in tiny Eureka. Quite a spectrum shift.

The state’s only Republican representative in Washington now will be Mark Amodei, whose 2nd Congressional District covers the northern half of the state and excludes Clark. Amodei won in every county and his Democratic opponent only came within spitting distance in Washoe and Carson City. Amodei took Elko with 80 percent of the vote, Humboldt with 79 percent and Lander with 82 percent, for example.

In the statewide races for constitutional offices the numbers broke down largely the same.

Incumbent Republican Secretary of State Barbara Cegavske edged out 30-year-old inexperienced Democrat Nelson Araujo by less than 1 percentage point, though she won handily in ever county except, you guessed it, Clark.

In the race for attorney general, Republican Wes Duncan won in every county, repeat after me, except Clark. Likewise for Republican treasurer candidate Bob Beers, while incumbent Republican Controller Ron Knecht lost only in Clark and Washoe. Again, in mosts cases the margins in rural counties exceeded 2-to-1 for the Republican.

The state Senate is also all red except for Clark and Washoe. The 13 Democrats to eight Republicans leaves the Democrats one seat short of a supermajority. That could happen if a planned recount changes the outcome in a district in Clark in which the Republican won by 28 ballots.

It takes a supermajority in both the Assembly and Senate to pass tax increases, thanks to an initiative pushed through by former Republican Gov. Jim Gibbons.

Now, if the Democrats can wail about how unfair it is that the 2016 presidential election was determined by the Electoral College — in which each state gets a vote for each representative in Congress, which is determined by population, and each state gets two votes for each senator no matter population — and not by popular vote, which, yes, Hillary Clinton and not Donald Trump won, it seems only fair that we be allowed to deign to suggest that Nevada could change its governing bodies to more closing match the federal system created by the Founders.

We could have an Assembly in which representatives are seated from districts of approximately equal population and a state Senate with a single representative from each county. The whole purpose of the U.S. Senate is to assure smaller states are not run over roughshod by more populous states.

So why should the smaller Nevada counties with differing philosophies and priorities and issues be virtually shut out of the decision making process?

Of course, the chances of that ever happening is almost certainly nil. So, consider this a wee Jeremiadic cry from the desert and a whisper in the ears of the near-supermajority to give some slack for the smaller rural counties. Seems only fair. And we know Democrats are sticklers for fairness.

In 1919 the Senate started a practice called “Little Federalism,” where each county received one member of the Nevada Senate regardless of population of said county. This set the Senate membership at seventeen which lasted until 1965-1967. The Supreme Court of the United States issued the opinion in Baker v. Carr in 1962 which found that the redistricting of state legislative districts are not a political questions, and thus is justiciable by the federal courts. In 1964, the U.S. Supreme Court heard Reynolds v. Sims and struck down state senate inequality, basing their decision on the principle of “one person, one vote.” With those two cases being decided on a national level, Nevada Assemblywoman Flora Dungan and Las Vegas resident Clare W. Woodbury, M.D. filed suit in 1965 with the Nevada District Court arguing that Nevada’s Senate districts violated the equal protection clause of the Fourteenth Amendment of the Constitution of the United States and lacked of fair representation and proportional districts. At the time, less than 8 percent of the population of the State of Nevada controlled more than 50 percent of the Senate. The District Court found that both the Senate and the Assembly apportionment laws were “invidiously discriminatory, being based upon no constitutionally valid policy.[7]” It was ordered that Governor Grant Sawyer call a Special Session to submit a constitutionally valid reapportionment plan.[8] The 11th Special Session lasted from October 25, 1965 through November 13, 1965 and a plan was adopted to increase the size of the Senate from 17 to 20.

Well there goes my representation in the state Legislature.

Who fills those vacancies?

Of course, the all-Democrat Clark County Commission. There is an online application form to apply for Hutchison’s seat, and I suppose there will be one for Duncan.

I would be tempted to apply, but with all the things I’ve written over the past 40-plus years, I’d probably get Ira Hansened.

So, the Clark County Commission, made up exclusively of seven Democrats, will be the arbiter of who gets appointed to fill the unexpired term of Republican state Sen. Mark Hutchison, who was elected lieutenant governor on Tuesday. Oh, they must name a Republican who lives in the district.

Rebplican Mark Hutchison’s senate seat must be filled by the all-Democrat county commission. (R-J photo by Sam Morris, formerly of the Sun)

Sisolak was quoted as saying that he would not choose an appointee based on how that person would vote, but on being a member of the community and life experience.

How quaint. I wonder how the rest of the commissioners will evaluate candidates.

The news story mentions two people as potential candidates for the post, Wes Duncan, a Republican who was just re-elected to a second term in the Assembly from District 37, and Chris Collins, executive director of the Las Vegas Police Protective Association.

To twist a phrase borrowed from Harry Reid, I don’t know how a union guy can be a Republican.

In fact, one of Gov. Brian Sandoval’s supposed priorities is collective bargaining reform. Might be harder to do with a fox in the hen house.

Just for a little perspective on the choices here, NPRI rated Duncan fourth most conservative member of the 2013 Legislature, while Hutchison was the least conservative Republican — although NPRI did not use the term “conservative,” that’s how it worked out.

Hutchison voted for the bill that forces NV Energy to close its coal-fired plants and replace the power with expensive new plants, including overpriced renewables. Duncan voted nay.

The commission is taking applications for the senate seat appointment.

Hmmmm, I have lived in Senate District 6 for 15 years, but just in case the commissioners were to promote Duncan from the Assembly to the Senate and would need to fill Duncan’s seat, I also live in Assembly District 37.  A member of the community and life experience?