President Trump is expected to shortly sign an executive order intended to punish social media companies that fail to act in what the order describes as “good faith,” according to CNN, which reviewed a copy of the draft order.

Such action would fold, spindle and mutilate the First Amendment.

The order apparently is his tantrum response to Twitter attaching a fact check link to two of his Tweets railing against the use of absentee ballots in Nevada and other states.

CNN reports that the executive order reinterprets the Communications Decency Act of 1996, which provides immunity from litigation for websites that allow individuals to post commentary, unlike print publications that can be sued for whatever they choose to print, even though it may be from an outside source, such as a letter to the editor.

“In a country that has long cherished the freedom of expression, we cannot allow a limited number of online platforms to hand-pick the speech that Americans may access and convey online,” CNN quotes from the draft order. “This practice is fundamentally un-American and anti-democratic. When large, powerful social media companies censor opinions with which they disagree, they exercise a dangerous power.”

The proper response to speak one does not like is more speak, not gags. Trump has a bully pulpit he can use. Use it, but stop trying to gag others.

The First Amendment prohibits government from abridging speech or press. Private parties can do what they wish. Trump is government. 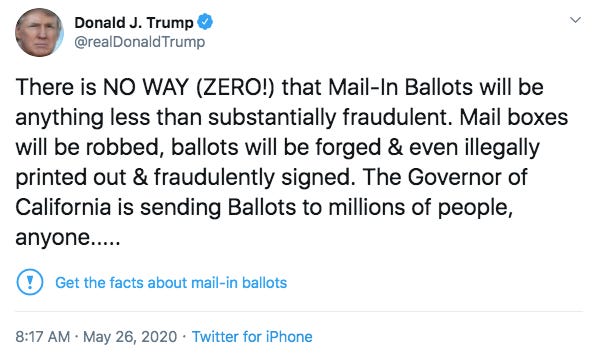 U.S. District Judge Naomi Reice Buchwald of New York ruled recently that President Donald Trump may not block Twitter users who criticize him because that violates their right to free speech.

“While we must recognize, and are sensitive to, the president’s personal First Amendment rights, he cannot exercise those rights in a way that infringes the corresponding First Amendment rights of those who have criticized him,” the judge said in her 75-page ruling, somewhat exceeding the 140-character limit of Twitter.

Any Twitter user can block people from accessing their online posts and replying to that user and their followers. Trump reportedly has posted 4,000 times on his personal @realDonaldTrump account to nearly 32 million followers. How that cacophony constitutes a public forum in which anyone can be heard strains credulity. But why should the president be obligated to give someone else unfettered access to those who have agreed to follow him?

The president should be treated no differently on his personal @realDonaldTrump account. His official presidential Twitter account, @POTUS — and why there is one of those is a mystery to us — is another matter entirely. He certainly may not block people from commenting on their own social media apps, but he is hardly obligated to accommodate anyone who wants to glom onto his personal Twitter account and use it as platform for their views. It is his soapbox. Create your own.

But the judge said Trump could not block people from following him on Twitter just because they had posted comments to which he objected, because that amounted to “viewpoint discrimination” by a public official in a public forum.

If Trump were to make a televised speech from the Oval Office, should the networks be required to keep the cameras rolling while any clown with a rant can piggyback on the speech by dashing up to the microphone?

It is like freedom of the press, which belongs to anyone who owns one.

U.S. District Judge Naomi Reice Buchwald of New York ruled today President Donald Trump may not block Twitter users who criticize him because that violates their right to free speech.

Any Twitter user can block people from accessing their online posts. The president should be treated no different. He certainly may not block people from commenting on their own social media apps, but he is hardly obligated to accommodate anyone who wants to glom onto his Twitter account.

Just because he is president does not change things. North Korea has ratcheted up the rhetoric to the brink of war.

The rogue nation’s foreign Minister said today that the U.S. has already declared war on North Korea, according to The Wall Street Journal.

Ri told reporters North Korea would “shoot down U.S. strategic bombers, even if they are not yet inside air-space border of our country.”

U.S. bombers over the weekend flew near North Korea as part of exercises.

On Saturday Trump tweeted, “Just heard Foreign Minister of North Korea speak at U.N. If he echoes thoughts of Little Rocket Man, they won’t be around much longer!”

Ri said today if North Korea takes action against U.S. warplanes, “The question of who will be around much longer will be answered then.”