With Christmas rapidly approaching you may be casting about for suggestions for what to give that special Nevada friend or family member. What could be better than books about Nevada or by Nevadans? The choices are as varied as the Nevada landscape and its denizens.

Doubly apropos this holiday season is Patricia Cafferata’s “Christmas in Nevada,” a collection of seasonal anecdotes from across the state and across the years. 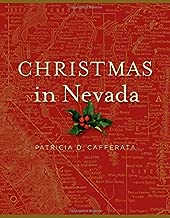 vada to serve in the U.S. House of Representatives — has penned and collected short takes that capture the spirit of giving and community pride. They start with the budding traditions established in mining towns during the territorial days of the 1860s and progress chronologically up the huge modern celebrations.

The small and tall tales from the early days include such scenes as the Virginia City butcher who in 1863 advertised his Christmas wares by parading 184 turkeys down the frozen dirt street to his shop; the huge Christmas fest in the Magnolia Hotel in Winnemucca in 1870 that included fish, oysters, chicken, green vegetables, tea and coffee, liquor and cigars; the “nevergreen” Christmas trees cobbled from scraps of wood in the Tonopah mining camp miles from any real pine trees; the mother in Silver Peak who started making mincemeat in November and preserved it for the holiday by storing it in the cellar draped in brandy-soaked cloths; the Christmas in White Pine County in 1907 during which three miners were trapped inside a collapsed copper mine for 45 days before being rescued and feted with a holiday banquet; and one family’s custom Christmas card tradition that has lasted more than 50 years.

Modern depictions include the Christmas festivities at Opportunity Village in Las Vegas, which helps those with intellectual and developmental disabilities develop life skills and find employment opportunities. It started in 1981 with the Magic Forest of lighted Christmas trees, raising about $3,000, but growing in recent years into a major holiday theme park attended by about 10,000 people and raising $1.5 million. Also mentioned are the “12 Days of Christmas” in Elko, the Santa Pub Crawl in Reno and the Santa Run in Las Vegas that have grown from modest beginnings to huge crowds.

Just out earlier this year is native Nevadan and decades-long newspaper columnist John L. Smith’s “The Westside Slugger: Joe Neal’s Lifelong Fight for Social Justice.” The biography introduces you to Joe Neal, the first African America to serve in the Nevada state Senate. It traces his rise from impoverished Madison Parish, La., through his three decades in the state Senate until he earned a place in the Senate’s Hall of Fame.

Smith uses countless sources as well as his own considerable knowledge of the man and the times — both as a journalist and through his parents’ civil rights and union activism — to paint a detailed portrait of the scrappy Neal, who fought for the things he believed in.

For those who seek to experience Nevada and the region for themselves there is the latest edition of Deborah Wall’s “Base Camp Las Vegas,” a guide to 101 hikes in the region. Packed with photos, the book tells one how to get there, when to go, how to prepare, what to expect and what to avoid. It is a must for the explorer.

Another book published this year, if not about Nevada, is a piece of historic fiction by decades-long Nevada journalist A.D. Hopkins, “The Boys Who Woke Up Early.” Hopkins has penned a fictional account from his boyhood home in western Virginia during the Eisenhower era, looking at the seamy side of life through the eyes of high school boys.

Yes, the boys might’ve awakened early on occasion, but what they “woke up” was rural Early County and

Jubal Early High School, named for a Confederate general. The book is laced with homespun conspiracies, displays of chivalry, dirty tricks, righteous revenge and conflicts that frequently result in gunplay, fisticuffs and the strategic use of ax handles and baseball bats. The plot is compelling and the dialog authentic.

For a cornucopia of books about Nevada and the West, turn to Range magazine’s website where you will find books and calendars depicting the ranching and farming lifestyle and attitudes. Among my favorites are the two “Brushstrokes & Balladeers,” coffee table books featuring Western-themed paintings and cowboy poets, including Elko County native Waddie Mitchell.

Return with us now to those thrilling days of yesteryear, when boys’ haircuts were white sidewalls, flattops and ducktails, when it was said a little dab’ll do ya, but it never really did. Back to those days in the Ol’ Dominion when segregation was strictly enforced, but liquor laws not so much. 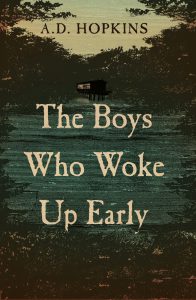 Better yet, let longtime Nevada investigative reporter and editor A.D. Hopkins take you there in his new novel, “The Boys Who Woke Up Early.” Yes, the boys might’ve awakened early on occasion, but what they “woke up” was rural Early County and Jubal Early High School, named for a Confederate general.

A.D.’s teenaged narrator of the tale is named Thomas Jackson Shelor, named after another Confederate general who went by the nickname Stonewall, so Shelor was called Stonewall, which was soon shortened to Stony.

The novel captures the quaint dialect — including language that can be occasionally coarse but authentic — the shabby scenery, nefarious political machinations, family feuds and strained race relations in such detail that you think you are looking at a photo instead of a painting. The plot constantly twists and turns as Stony and his friend, newcomer Jack, confront moonshiners, whorehouse operators and Klansmen.

For a guy who spent nearly half a century in newspaper journalism, which is not known for florid descriptives, Hopkins the novelist can turn a phrase, such as when he introduces jazz aficionado Jack in the opening chapter: “When the bell fell silent, we could hear only his leather heels striking the concrete like an unhurried drummer building for some fellow musician to launch a solo.”

Hopkins and I worked together for more than 20 years at the Las Vegas Review-Journal.

The book is laced with homespun conspiracies, displays of chivalry, dirty tricks, righteous revenge and conflicts that frequently result in gunplay, fisticuffs and the strategic use of ax handles and baseball bats.

Here is an example of the kind of dialogue and tense action A.D. offers in page after page. This tells of Stony going to the aid of a classmate named Mary Lou who was about to be attacked by Klansmen for dating a black man named Roosevelt:

“Stony! Why’re you sneaking in my back door? And you look like a drowned cat!”

I said, “The Ku Klux Klan is coming is coming up here to hurt you. They beat up Roosevelt. Do you have any guns?

Instead of answering, she jumped up and ran to the front door and locked it, then to the back and locked it, too. Then she ran up the stairs and I followed her, trying to tell her more.

While I was saying this, she yanked a pair of panties on under the nightgown, so fast I saw absolutely nothing a Baptist boy wasn’t supposed to. She pulled on a pair of bib overalls, stuffing the nightgown into the overalls like a long shirt. She pulled on socks and pair of high-top shoes, which she didn’t take time to tie. …

“Where do you think we should make our stand?” I asked in a half whisper as soon as we were out in the dark.

“We don’t make a stand,” she answered. “If we make one, somebody probably gets shot, probably us. The idea is to live through it!”

“The Boys Who Woke Up Early” is a satisfying page turner. Published by Imbrifex Books, it is available online and in some local bookstores. 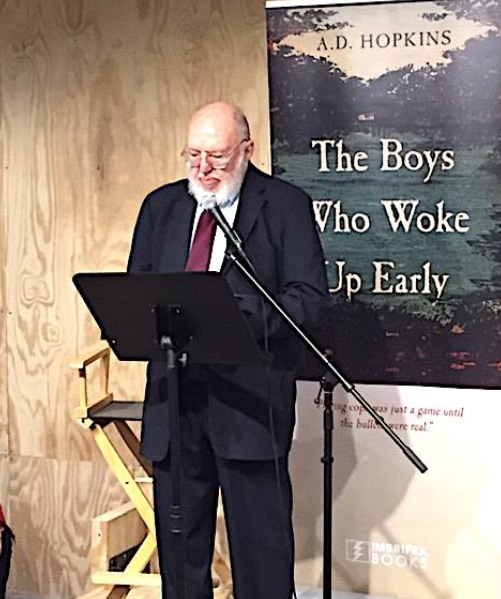