How soon they forget.

While the story relates that 60 Chinese investors in the project to convert the old Sahara hotel into the SLS Las Vegas are suing, partly because they have not received their promised visas in return for their $500,000 investments under the controversial EB-5 visa program, there is no mention of the role of former Nevada Sen. Harry Reid.

Some of those Chinese investors had been denied visas by Homeland Security because of “suspicious financial activity.” That decision was ineligible for appeal.

But Reid and his staff twisted arms anyway.

According to a Washington Times account at the time, one U.S. Citizenship and Immigration Services official reported getting into a shouting match with a Reid staffer over the denial of those visas.

“This one is going to be a major headache for us all because Sen. Reid’s office/staff is pushing hard and I just had a long yelling match on the phone,” that official wrote in an email. That official was later called by Reid himself, seeking the help of the agency’s head,  Alejandro Mayorkas. 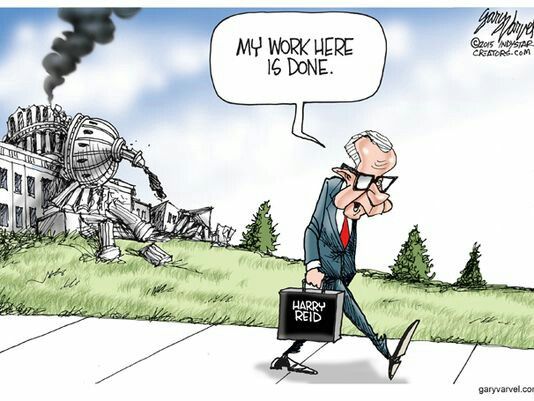 Reid made a personal call to Mayorkas in January 2013, according to the Times, and Mayorkas promised him his agency would take a “fresh look” at the SLS hotel and casino visa request. Soon after that the agency expedited visas for about two dozen foreign SLS casino investors.

Mayorkas was later confirmed by the Senate to become the second in command at Homeland Security despite the fact he was under investigation for expediting certain visa applications for certain applicants despite the rejection of those visas by career staffers.

An ethics complaint was filed against Reid, but it went nowhere.

“Despite the fact that these applications were ineligible for appeal, Senator Reid’s efforts to lobby USCIS resulted in the reconsideration and approval of those applications …” the complaint said, adding that the recipients of the investments were major contributors to the Democratic Party and Democratic candidates. “Even more troublesome is the fact that Senator Reid’s son, Rory Reid, and his law firm, Lionel, Sawyer & Collins P.C., are legal counsel to the SLS Hotel and Casino.”

The complaint pointed out that the U.S. Senate Code of Official Conduct permits members to assist people with executive branch agencies, but it also says:

Interestingly, in 2015, Democratic California Sen. Dianne Feinstein called on Congress to end the EB-5 visa program that grants visas to foreigners who invest in job-creating projects in the U.S., saying it was a “citizenship-for-sale” program. She said it is “crystal clear that the EB-5 regional center program presents a stark conflict of interest for the Trump White House.”

Her umbrage was prompted by reports that President Trump’s son-in-law Jared Kushner’s sister mentioned the visa program to potential Chinese investors in a family-owned project.

She had no such outrage years earlier when Reid bullied the agency for the SLS.

Homeland Security Secretary Jeh Johnson shrugged it off, saying Mayorkas had been “impatient with our sluggish government bureaucracy.” It wasn’t sluggish. The expedited visas were denied and that decision was, according to agency rules, not appealable.

Later an ICE agent who tried to block the SLS visas was fired. She refused to accept a $100,000 severance package that would have required non-disclosure and testified before Congress about the abuses of the EB-5 program. She later accepted an undisclosed settlement.

The agent testified that EB-5 visas were approved in as little as 16 days and “lacked basic necessary law enforcement” screening.

She told Congress: “In 2013, after disclosing gross mismanagement, waste and fraud that threatened the general public’s safety, National Security Risks and public corruption surrounding an EB-5 project, I was subjected to a significant amount of harassment and retaliation. … Some of the violations I was investigating surrounding this EB-5 project include Title 18 statues; Major Fraud, Money Laundering, Bank and Wire fraud. In addition, I had discovered ties to Organized crime and high ranking officials and politicians, who received large campaign contributions that appeared to have facilitat(ed) the EB-5 project.”

Reid not only called the whistleblowers who complained about his meddling in the visa program decisions whiners but bragged that he would do it all over again.

“One of the problems we have with government … is people take too long to make decisions,” Reid said.

That’s all water under the bridge … apparently.

I mentioned the other day that a conservative-leaning watchdog group had filed a letter of complaint with the Senate ethics panel concerning acts by Nevada senior Sen. Harry Reid that constituted a conflict of interest.

The group, Cause of Action, pointed out that Reid and his staff urged the head of the U.S. Citizenship and Immigration Services to grant special EB-5 visas to a group of Asians planning to invest in the renovation of the old Sahara Hotel, now called SLS Las Vegas. Such visas are granted to foreigners who invest more than $500,000 in American projects that create jobs. The agency had turned down the visa applications due to “suspicious financial activity.” Though that decision was ineligible for appeal, the head of the agency reversed it.

Cause of Action noted that Reid’s son Rory and his law firm, Lionel, Sawyer & Collins are legal counsel to SLS and Senate rules demand that senators avoid conflicts of political, personal or financial interest.

Perhaps, Cause of Action should amend its letter. Four days after filing the complaint, the Senate voted to confirm the nomination of the head of U.S. Citizenship and Immigration Services, Alejandro Mayorkas, to become the second in command at the Department of Homeland Security. The vote was 54-41.

Had Reid not just changed the Senate rules the nomination would have failed to achieve the previously required 60 votes.

Mayorkas was confirmed despite the fact he was under investigation at the the time for — wait for it —  expediting EB-5 visa applications for certain applicants despite the rejection of those visas by career staffers. Among those seeking foreign investors were now-Virginia Gov. Terry McAuliffe and the brother of former Secretary of State Hillary Clinton, Anthony Rodham. They were after visas for investors in an energy-efficient car company.

Do you see a pattern?

Career staffers reject visas for foreign investors in a Las Vegas hotel project represented by the senator’s son. The senator makes a personal call to Mayorkas, according to an email obtained by The Washington Times, and Mayorkas promises the senator his agency would take a “fresh look” at the visa request. Fresh look results in visas being expedited. Hotel project has groundbreaking. Senator changes filibuster rules for presidential nominees so only a simple majority is required. Fresh looker wins confirmation on a simple majority vote.

The Latin term is quid pro quo, something for something.

So far as I can find, no Las Vegas news media outlet has bothered to report on the ethics complaint against Reid, which was filed in mid-December.