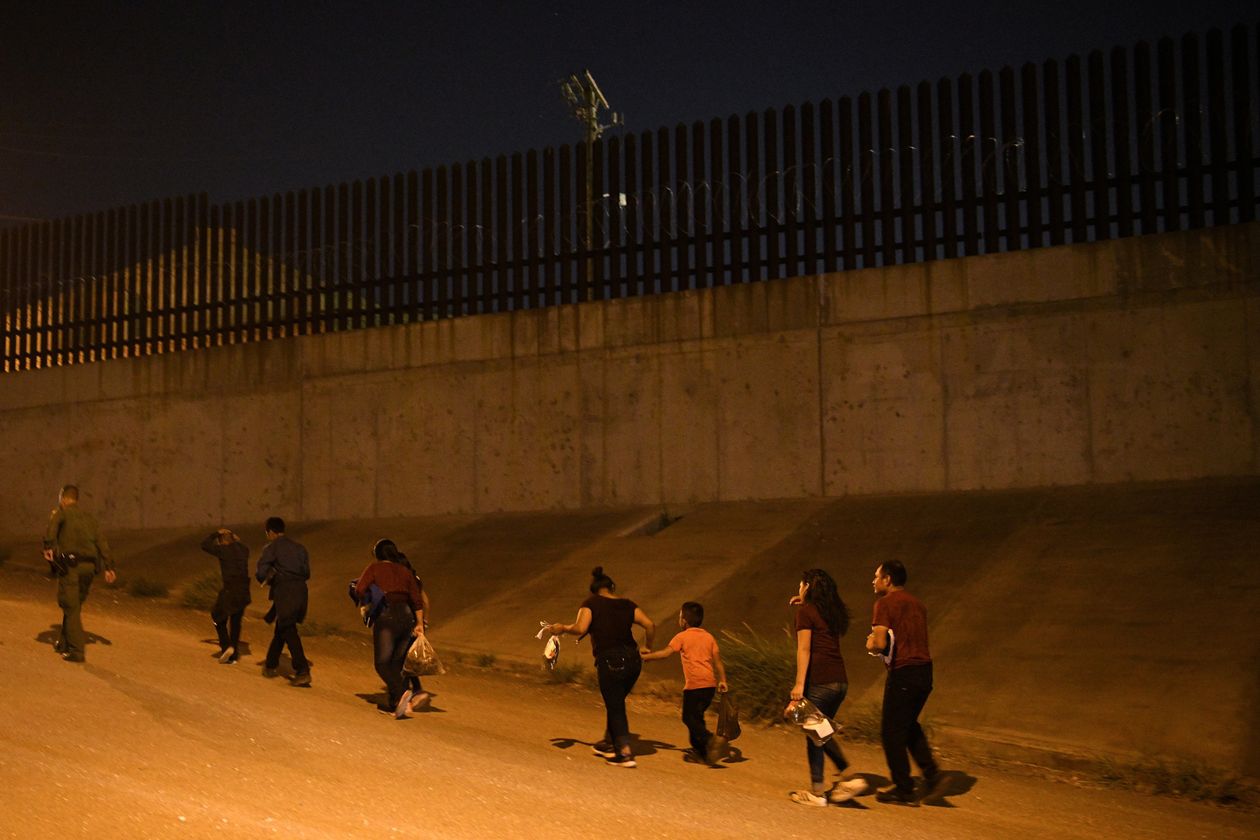 Migrant families at the border in Texas. (Reuters pix via WSJ)

Within days of the Trump administration announcing that it intended to scrap a 1997 court decree known as the Flores settlement that prohibited holding illegal immigrant children for more than 20 days, 19 states and the District of Columbia announced they are filing suit to stop the change, including Nevada.

In a press release reporting Nevada’s joining the litigation, Attorney General Aaron Ford said, “This latest Trump Administration policy to keep children in cages for an indefinite period of time is both cruel and shameful. What’s more, it reverses a longstanding court-approved settlement concerning the humane treatment of immigrant children. I stand with other states in fighting this attack on our children and families using every legal tool at my disposal.”

The problem is that the status quo is untenable.

The Flores settlement has resulted in the Southern border being overrun by illegal immigrant families. Nearly half a million such “families” have crossed into the U.S. and turned themselves in so far this year. That is triple the number for all of the previous year and 30 times the number from just seven years ago.

These “families” are being released into the U.S. pending immigration hearings for which the vast majority never show up.

An op-ed in The Wall Street Journal recently noted that this catch and release policy has created a powerful incentive for people, largely from Central America, to cross the border and make specious asylum claims.

“It also created an incentive for smugglers to offer huge discounts to anyone traveling with a child. Instead of attempting to evade Border Patrol, as they do with single adults, smugglers could simply bring migrant families up to the south side of the Rio Grande and tell them when to cross. Families were told to find a Border Patrol agent, turn themselves in, and not worry — they’d soon be released,” the op-ed by John Daniel Davidson, a senior fellow at the Texas Public Policy Foundation, recounts.

Davidson said children have become “passports” into the U.S. and officials have encountered thousands of fake families and instances in which children are being “recycled” — crossing the border multiple times with different adults posing as parents.

The original Flores settlement declared that children could not be held in custody with unrelated adults for more than 24 hours, but the current catch and release program allows those same children to be released into the custody of unrelated adults, many of whom are in the country illegally themselves.

According to Davidson, the number of minors ordered deported after failing to appear for an immigration hearing has risen from 519 in 2010 to 6,700 in 2018. That’s just the minors.

Ford’s press release argues that the administration’s attempted change in detention practices “would result in the vast expansion of family detention centers, which are not state licensed facilities and have historically caused increased trauma in children. The rule will lead to prolonged detention for children with significant long-term negative health consequences. In addition, the attorneys general argue the rule violates both the Administrative Procedure Act and the due process clause of the Fifth Amendment to the U.S. Constitution.”

But the greater harm is due to Congress failing to act and require the immediate deportation of persons, whether in a family unit or not, who enter the country illegally.

The 20 attorneys general filing suit are all Democrats.

Ford is not acting in the best interest of Nevada taxpayers, who already are paying to educate the highest percentage of children of illegal immigrants in the nation — 17.6 percent, according to Pew Research. Ford should withdraw from this litigation and let the administration at least come up with a plan before suing.

We just can’t seem to escape “identity” politics. It should be an oxymoron. Politics should be about ideas, not looking out for your kind, your group — whether gender, complexion of skin, social standing, youth, etc.

But no, it is the first rejoinder cast.

When the new Assembly Speaker-apparent John Hambrick summarily ousted Assemblywoman Michele Fiore and Assemblywoman Victoria Seaman from their posts as chair and vice chair of the Taxation Committee, respectively, the women promptly fired off a scathing email accusing Hambrick of engaging in a Republican war on women.

“It appears a few men in our party are not happy that we have Republican woman in key leadership roles in the legislature, and may look to Democrats for help in unraveling more leadership roles”, said Fiore.

“To replace the two women elected to the Taxation Committee with two men, sends a very dangerous message to Nevada women voters.  Women pay taxes too in Nevada,” Seaman added.

Hambrick — who gave no reason for the ouster — almost immediately reversed himself, again without explanation.

This broad brush (pun wasn’t intended but will stand, perhaps to my chagrin) painting of one group or other as victims is just as repugnant as showing favoritism. But we can’t seem to resist.

Who can forget Harry Reid’s exclamation:

“I don’t know how anyone of Hispanic heritage could be a Republican, OK. Do I need to say more?”

Blacks tend to vote Democratic, despite the fact minority economic well-being seems to suffer when the Democrat wins, even if that Democratic is half black.

We all are minorities of one. We are not lemmings. Are shouldn’t be.

Reason, logic and facts seem to go out the window when any demographic is singled out.

Congressional staffers walked out onto the steps and raised their hands in that hands-up-don’t-shoot gesture, though a grand jury found that to be an utter fabrication.

Politics and justice should be based on facts and not us against them. 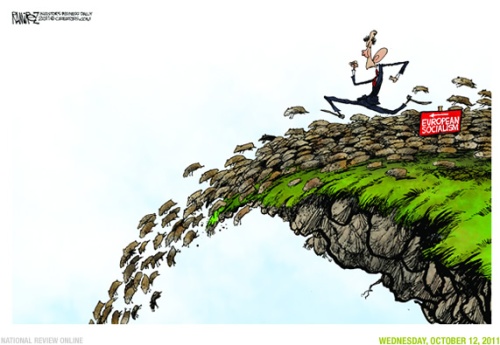 Speaking a couple of months ago at the Human Rights Campaign’s annual black tie dinner — which would exclude me right there — former President Bill Clinton said:

“I believe that in ways large and small, peaceful and sometimes violent, that the biggest threat to the future of our children and grandchildren is the poison of identity politics that preaches that our differences are far more important than our common humanity.”

He reminded in audience that “we’re 99 and a half percent the same.”

What is in our heads is far more important than the pigment of our skin or our biological plumbing.

So what should our children and grandchildren say when they are told their taxes are going up to pay the interest on the $17 trillion in debt this nation has rung up?

How about: “There’s the graveyard. They borrowed the money. Collect from them.”

Maybe it is time to default. Full faith and credit? No one has any faith we’ll ever be able to repay and our credit rating is rapidly declining.

Not only is our debt unsustainable, it is unfathomable, because the feds have been cooking the books.

Just like the Nevada public employees pension program, which claims to have $10 billion in unfunded liability but really has $40 billion, the federal debt is not just $17 trillion and growing by $1 trillion a year.

According to a column in The Wall Street Journal this past fall by Chris Cox, a former chairman of the House Republican Policy Committee and the Securities and Exchange Commission, and Bill Archer, a former chairman of the House Ways & Means Committee, “The actual liabilities of the federal government — including Social Security, Medicare, and federal employees’ future retirement benefits — already exceed $86.8 trillion, or 550% of GDP. For the year ending Dec. 31, 2011, the annual accrued expense of Medicare and Social Security was $7 trillion. Nothing like that figure is used in calculating the deficit. In reality, the reported budget deficit is less than one-fifth of the more accurate figure.”

For the government to actually pay as we go on all spending and entitlements would require revenue of $8 trillion a year, Cox and Archer calculate. To cover this, they say, confiscating every dollar of income from Americans earning more than $66,000 a year, plus all of the corporate taxable income in the year before the recession, that of course is less now, wouldn’t be enough.

Another sad part of all this is that at the same time we are saddling the next generations with an impossible tax burden, we are simultaneously hobbling them with inferior education, scant employment opportunities and piles of college loan debts.

According to the Department of Labor, in July only 33 percent of 16- to 19-year-olds without any disability had a job. Only 65 percent of able-bodied 20- to 24-year-olds held down jobs.

It’s been 30 years since “A Nation at Risk,” was published, declaring, “If an unfriendly foreign power had attempted to impose on America the mediocre educational performance that exists today, we might well have viewed it as an act of war.” Little, if anything, has changed since.

On top of this, as if this camel needed another straw, young people will have to shoulder a disproportionate share of insurance costs under ObamaCare, because the law states no age group will pay more than three times the premiums of another age group, even though older people require five times as much expense as younger people.

To contort Churchill: Never have so many asked so few to do so much with so little.