Let me get this straight.

The Energy Department may have been mistakenly shipping unstable nuclear material to the Nevada National Security Site since 2013, but the guy who took office in 2017 and whose agency caught the apparent error, suspended further shipments and informed Nevada public officials of the possible error is to blame and should resign.

The morning newspaper quotes Democratic Rep. Steven Horsford calling for Energy Secretary Rick Perry to resign and Democratic Rep. Dina Titus blustering, “The level of incompetence at the Department of Energy is only matched by its dishonesty.”

Let’s see, the errors apparently occurred for four years of the Obama administration without anyone catching it, but the agency that caught the error and reported it is dishonest and to blame.

The paper quotes a Horsford statement as saying, “Secretary Perry has repeatedly disrespected the people of Nevada and eroded the public trust in his ability to abide by established rules for waste disposal. His failure to disclose these actions amount to their lying to a federal judge, our Nevada congressional delegation and our state’s governor repeatedly about his agency’s activities in our state. Secretary Perry must resign immediately.”

The Energy Department was supposed to only ship low-level radioactive waste from Oak Ridge, Tenn., to N2S2, but nine shipments may have included unstable “reactive” nuclear material mislabeled as low-level waste.

The newspaper further quotes a letter fired off to the Energy secretary by Gov. Steve Sisolak and Nevada Sens. Catherine Cortez Masto and Jacky Rosen, all Democrats, saying, “These egregious acts — whether acts of negligence or indicative of something else — are unconscionable and have potentially put the health and safety of Nevadans and our environment at unacceptable risk, including the employees of NNSS and the communities in Nevada and along the transportation routes of this material to NNSS.”

But an Energy Deparment statement was quoted as saying, “The components that were shipped pose no risk to the safety and health of the general public or workers at the facility at NNSS. The Department’s National Nuclear Security Administration has launched an internal investigation to determine how this went undetected for a six-year period.” Four of those years during the previous Democratic administration, by the way.

Umbrage always seems to be taken only when the offended ones are of a different political party. 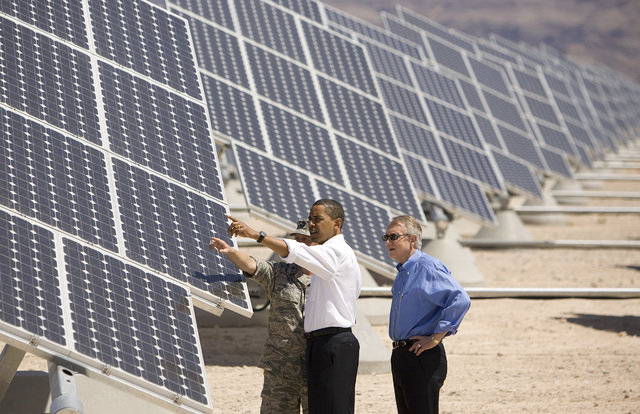 For decades Nevada’s former U.S. Sen. Harry Reid constantly pounded on two themes: Blocking nuclear waste from being stored in Yucca Mountain in Nye County and pressing for more and more solar panels to be thrown up on thousands of acres of public land and on rooftops across the state.

When Congress designated Yucca Mountain as the nation’s sole nuclear waste dump in 1987, Reid said two things, no and hell no. As he rose in seniority in the Democratic Party to become Senate majority leader, he finally found the power to make those words stick and steadily turned down the funding spigot for the project until President Obama shut it down entirely.

As he neared retirement, Reid declared Yucca Mountain dead, though President Trump and his Energy Secretary Rick Perry have been trying to breathe life back into it.

Meanwhile, Reid campaigned vigorously for green energy, bragging about his role in the state investing $6 billion in green energy and creating 20,000 jobs. The projects include sites such as the 3,000-acre Copper Mountain Solar project outside Boulder City and the 15-megawatt solar panel installation on Nellis Air Force Base.

Almost every year at his long-running green energy conference in Las Vegas, Reid would drag out some dignitary from the base to repeat the boast that the project was saving taxpayers $1 million a year in power costs — without ever bothering to mention the panels cost $100 million in 2007 and would reach obsolescence in 25 years and need to be disposed of.

Which brings us to the closing of the circle.

An alert reader recently brought to our attention a report from a Berkeley-based group called Environmental Progress. It seems that when you do the math, solar panels create 300 times more toxic waste per unit of energy output than nuclear power plants.

This prompted our alert reader to suggest it is time to contemplate the Yucca Mountain Solar Panel Repository.

“We talk a lot about the dangers of nuclear waste, but that waste is carefully monitored, regulated, and disposed of,” Michael Shellenberger, founder of Environmental Progress, an advocate for nuclear energy, told the National Review. “But we had no idea there would be so many panels — an enormous amount — that could cause this much ecological damage.”

The Environmental Progress report states, “If solar and nuclear produce the same amount of electricity over the next 25 years that nuclear produced in 2016, and the wastes are stacked on football fields, the nuclear waste would reach the height of the Leaning Tower of Pisa (52 meters), while the solar waste would reach the height of two Mt. Everests (16 km).”

Those innocent looking solar panels contain elements such as lead, chromium and cadmium — known carcinogens. The panels are difficult and expensive to recycle. The process is labor intensive and the price of the resulting scrap material is low, according to the National Review. (Never mind the toxic waste created during the manufacturing process.)

But, since they are already imbedded in glass and plastic and would not necessarily have to be protected by water shields like nuclear waste canisters if they were buried in those miles of tunnels at Yucca Mountain, it seems like a solution to the problem of what do with that $15 billion project sitting idle in the desert. The main problem is that it may not be big enough.

The United States has more than a million solar energy installations, many of which are nearing the end of that 25-year life expectancy, and more are being built, though currently solar produces only about 1.3 percent of the world’s electricity, compared to 10 percent for nuclear power.

As for the nuclear waste, we never thought it a good idea to dump it in a hole in the ground, when it can be recycled, as many countries currently do. It would be rather easy to haul the stuff to the desert at or near Yucca Mountain and store it above ground in dry casks until it can be recycled, possibly on site, which would create a number of high tech jobs.

Don’t you love it when mislaid plans come together?