As Democratic presidential candidates sweep across the state in advance of Saturday’s caucus rural voters should pay close attention — as if your life depends on it, because it does — to what they say about their plans for changing how Americans pay for health care.

Two of them — Sens. Bernie Sanders and Elizabeth Warren — are advocating what has been dubbed “Medicare for All,” which would basically outlaw private health insurance, such as that offered by employers and unions, and replace it with a taxpayer-funded single payer plan.

The rest have called for creation of a public option that would compete with private insurers and saddle taxpayers with the cost.

This has been exacerbated by Medicare’s method of reimbursement, which is based on wage indexing.

Because of such payments schedules and other factors, according to the Cecil G. Sheps Center for Health Services Research at the University of North Carolina, 166 rural hospitals have closed since 2005, including in 2015 the Nye Regional Medical Center in Tonopah. That closure left residents 100 miles from the nearest hospital and 200 miles from the nearest level one trauma center, though some local clinics now provide some urgent care. Four rural hospitals have closed so far this year.

The Medicare administrator noted that nearly 60 million rural Americans — often living in areas with higher rates of poverty and having difficulty traveling long distances to a hospital or doctor’s office — face higher risks. Recent Centers for Disease Control data found 57 percent of deaths from chronic lower respiratory disease in rural areas were preventable, compared with only 13 percent preventable deaths for people with the same condition in urban areas.

A study this past August for the Partnership for America’s Health Care Future conducted by Navigant Consulting looked at what the impact on rural health care might be at different levels of federal takeover of health care reimbursements.

Under the least intrusive option in which everyone covered by an employer-based insurance program kept that plan while others were swept into the public option, the study estimated that 28 percent of rural hospitals would be at high risk of closure, including three in Nevada.

Under the Medicare for All option, the study estimated that 55 percent of rural hospitals or more than 1,000 could be at high risk for closure, including eight in Nevada.

Even Sen. Warren has recognized that the plan she and Sanders have been backing could have an adverse impact on rural hospitals. A posting on her campaign website says, “Medicare for All will mean access to primary care and lower health costs for patients — and less uncompensated care for rural hospitals, helping them stay afloat. Elizabeth will create a new Medicare designation for rural hospitals that reimburses them at a higher rate and offers flexibility of services to meet the needs of their communities. Elizabeth will also strengthen antitrust protections to fight hospital mergers that increase costs, lower quality, and close rural facilities.”

How it will be paid for is not mentioned.

For his part Sanders blithely states online, “Rural people in particular have suffered the negative consequences that result from a lack of access to affordable, quality health care. Access to health care is a top issue for farmers and have some of the highest uninsured rate, in fact 41% of dairy farmers lack health insurance. With Medicare-for-All, small business owners, including farmers, will no longer have to worry about providing health care to their families or employees.”

Who will worry about paying for it?

According to the University of Nevada, Reno School of Medicine, Nevada already ranks 45th in the nation for active physicians per 100,000 population, 48th for primary care physicians and 50th for general surgeons. 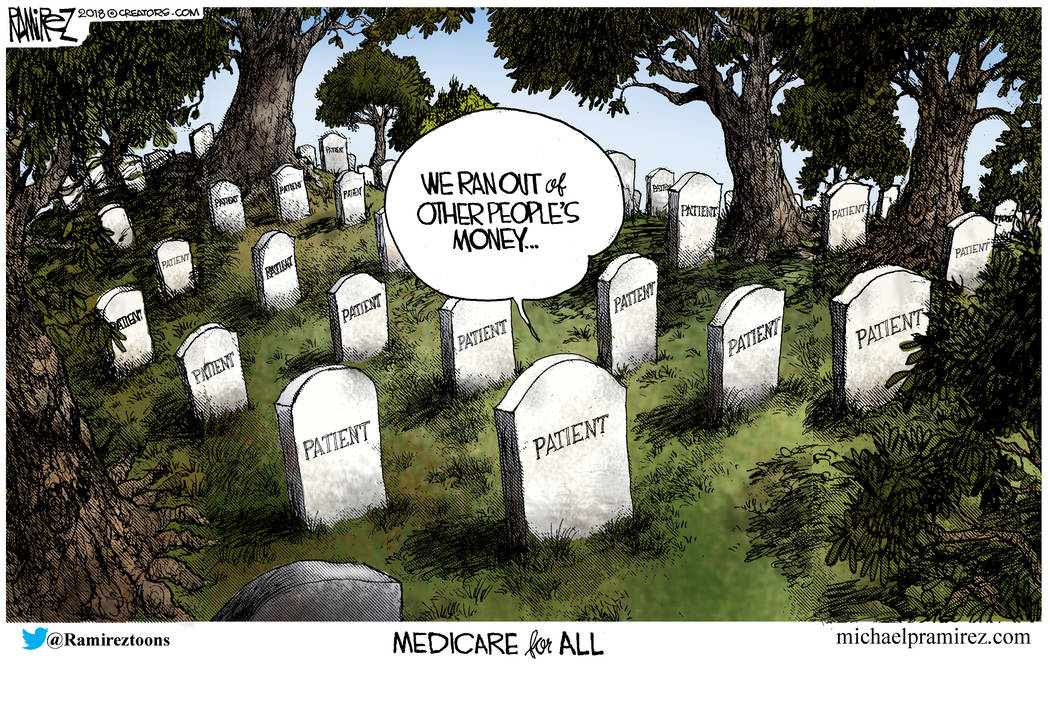