This week the newspaper industry giants Gannett and GateHouse Media announced that they are merging and will make cuts on the expense side of the ledger, including layoffs, though pledging to avoid big cuts to the newsrooms, according to The Wall Street Journal. The combined company will own 261 daily newspapers and of weeklies in 47 states, publishing about 30 percent of all newspapers circulation in the country. Gannett owns the newspapers in Reno and St. George.

This past Friday, after announcing the company was having liquidity problems — including announcing it cannot make a $124 million payment to its pension plan next year, asking its largest creditor to restructure its debt and taking a $300 million write-down on the value of its newspapers — McClatchy stock fell 66 percent, according to Forbes. The financial situation is so dire the company may face bankruptcy.

GateHouse briefly owned the Las Vegas newspaper in 2015, buying it and 60 other Stephens Media newspapers for $102.5 million and selling the R-J and two weeklies for $140 million to casino owner Sheldon Adelson, according to Politico.

The possible outlook for the newspaper industry is getting even more gloomy. WSJ quotes Pew Research Center as saying newspaper editorial jobs in the U.S. fell from 71,000 in 2008 to 38,000 in 2018.

Despite its pledge otherwise, GateHouse has a reputation for laying off journalists to save money on the bottom line. 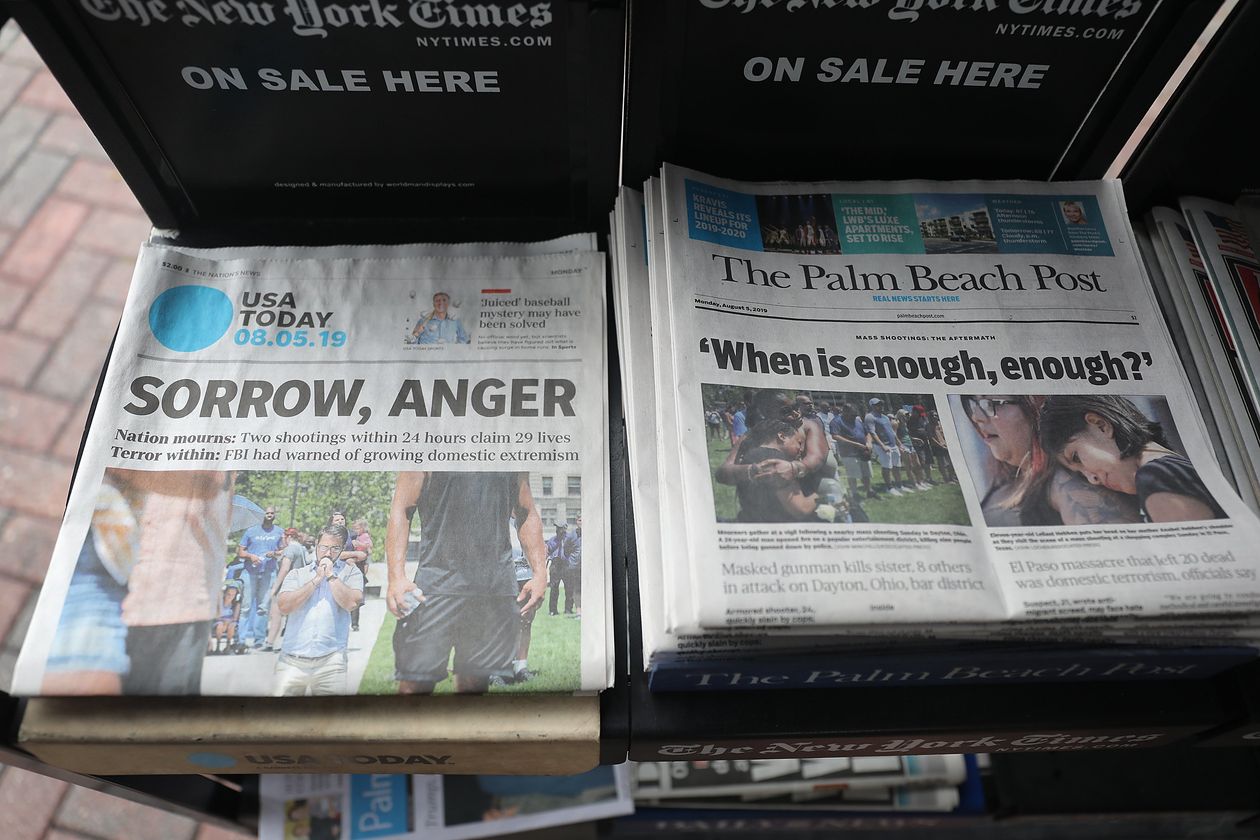 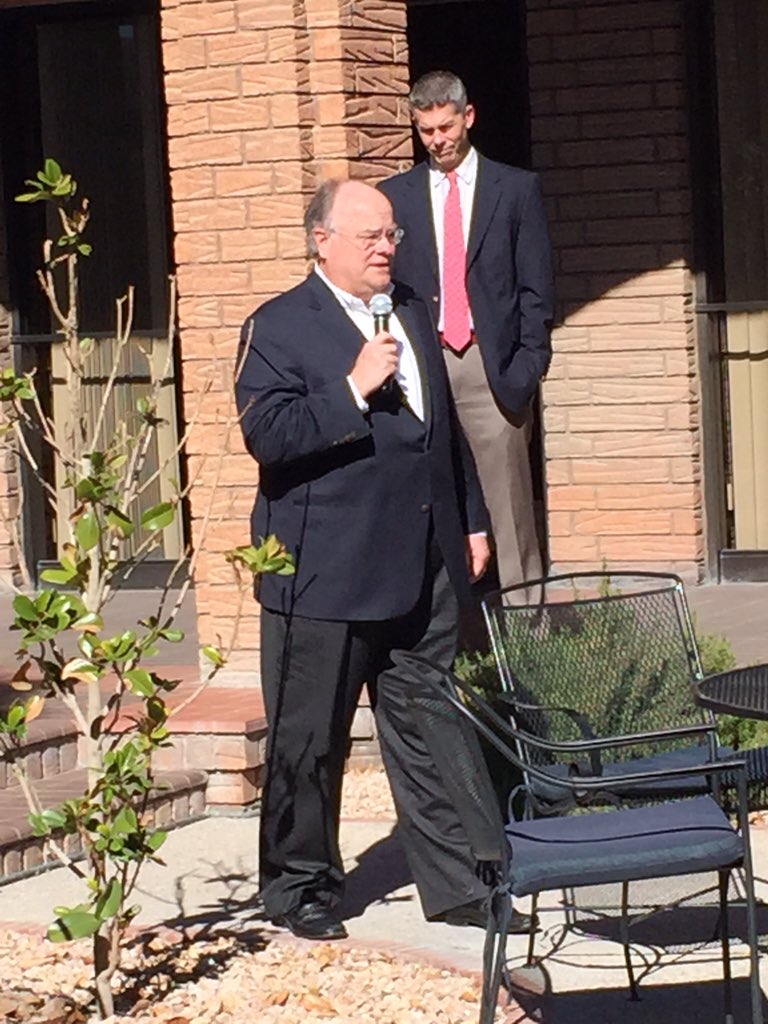 May you work at an interesting place. A curse? Or a blessing?

At noon Friday the Las Vegas Review-Journal reported online that the new publisher had named a new editor. This was an hour after two of the paper’s reporters had tweeted the news with photos of the new editor in the courtyard introducing himself and six minutes after the “competition” Las Vegas Sun posted the news online.

A half hour later, the R-J posted online an editorial endorsement of Marco Rubio for the Republican nomination for the presidency. This included a rather odd disclaimer:

The RJ met with Sen. Rubio on Oct. 9, two months before the announcement of the newspaper’s sale to the family of Las Vegas Sands Chairman and CEO Sheldon Adelson. The Adelsons have detached themselves from our endorsement process, and our endorsement of Sen. Rubio does not represent the support of the family.

Since when has anyone known Adelson to detach himself from anything?

Though the endorsement is online, it has not been published in print, which will probably come in the more widely circulated Sunday edition. Why it was published before the new editor could shake the Minnesota snowflakes from his hair is another oddity.

On Oct. 12 Politico published a story about Rubio courting Adelson for his support, phoning him several times a month to update him on his campaign. Rubio met with Adelson during that Las Vegas visit and Politico described Adelson as “leaning increasingly toward supporting Marco Rubio …”

It also stated, “Adelson, seated at the head of his conference table, heaped praise on Rubio’s performance while he discussed the dynamics of the 2016 race. Those briefed on the meeting described it as short but said it had an air of importance …”

The story reports that Adelson and his wife spent nearly $100 million supporting Republicans in 2012, a chunk of it going to Newt Gingrich.

Despite the claim of detachment, most of the headlines about the endorsement of Rubio made note of the fact Adelson owns the newspaper.

As for the new editor, J. Keith Moyer — senior fellow in the University of Minnesota’s School of Journalism and Mass Communication for the past five years and president and publisher of the Minneapolis Star Tribune from 2001 to 2007 and editor for Gannett and McClatchy — there is a surprisingly small online footprint.

A search for “by J. Keith Moyer” turns up a laudatory review of a book by former Star Tribune editor Tim McGuire, who I know from American Society of Newspaper Editors conventions, and a recommendation for cocktail onions.

There is a rather disquieting report online by a former desk editor who worked with Moyer in Fresno and claims Moyer killed stories about the troubled Fresno State basketball team coached by Jerry Tarkanian and expressed a willingness to bury ledes to curry favor with local government.

Never let the facts get in the way of the optics.

Obama has rejected construction of the Keystone XL pipeline, it was in all the papers.

The wire story that bannered the front of the Las Vegas newspaper accurately quoted Obama as saying the debate over the pipeline proposals was overinflated and, “All of this obscured the fact that this pipeline would neither be a silver bullet for the economy, as was promised by some, nor the express lane to climate disaster proclaimed by others.”

The story also stated matter-of-factly that the “pipeline would have little impact on greenhouse gas emissions.”

Define little. The State Department actually said that not building the pipeline would increase greenhouse emissions by 28 to 42 percent more than if the pipeline were built, because the tar sands oil would still be produced but shipped in a less clean manner.

The rejection of the pipeline has nothing to do with whether it would be clean or dirty or produce good jobs, but perception. Obama said:

America is now a global leader when it comes to taking serious action to fight climate change.  And frankly, approving this project would have undercut that global leadership.  And that’s the biggest risk we face — not acting.

Today, we’re continuing to lead by example.  Because ultimately, if we’re going to prevent large parts of this Earth from becoming not only inhospitable but uninhabitable in our lifetimes, we’re going to have to keep some fossil fuels in the ground rather than burn them and release more dangerous pollution into the sky.

Uninhabitable in our lifetimes? The predicted warming is 2 degrees Fahrenheit over the next 70 years.

The pipeline would have created 9,000 construction jobs and 40,000 ancillary jobs, but that does not cast a shadow over the optics.

Of course there were hosannas from the front pews of the church of green. “That gives him new stature as an environmental leader, and it eloquently confirms the five years and millions of hours of work that people of every kind put into this fight,” said Bill McKibben, founder of the climate group 350.org.

But nobody in the press is correcting them.