If the Energy Choice Initiative (ECI) amending the state Constitution to create a competitive market for electricity passes again in the fall its impact on power bills in rural Nevada will depend on how the Legislature writes the rules to make it happen.

David Luttrell — general manager of the Lincoln County Power District No. 1, president of the Nevada Rural Electric Association and a member of the Governor’s Committee on Energy Choice — notes that proponents of the ballot measure insist existing utilities should divest themselves of their power generating assets and current contracts to purchase power.

Luttrell says there is uncertainty about what energy choice would look like in the coming years, saying, “The vast majority of it will be written by the next couple of sessions of the state Legislature. The only thing that really you can point to in that document and that amendment language is that a single person in the state of Nevada will have choice of some sort.”

The way the cooperatives keep rates competitive is that many get as much as 80 percent of their power from very low cost hydroelectric generation, such as that from Hoover Dam. That hydropower is limited to public, not-for-profit organizations such as rural electric utilities.

“If we are precluded in any way from doing that there’s going to be a negative impact. Does ECI mandate that, that we have to get rid of your Hoover power? No it doesn’t, as it is currently written in that one paragraph constitutional amendment,” the power district manager says. “But what it does is it puts that uncertainty to a future Legislature to make that decision. We know the proponents of the ECI are saying is all utilities need to get rid of their power sources, otherwise they have an unfair competitive advantage.”

Jon Wellinghoff, a consultant to the ballot question and former Federal Energy Regulatory Commission chairman, has said in an interview with the news website The Nevada Independent that lawmakers could designate existing rural nonprofit power companies as the provider of last resort and allow them to keep their existing power contracts.

“It’s virtually a non-issue if we structure the legislation correctly,” he said.

And that’s Luttrell’s fear. Will the lawmakers structure the legislation correctly?

If his cooperative is required to divest its power contract for inexpensive hydropower in order to allow competitors to come in, Luttrell warns the rates in rural Nevada are going to go up dramatically.

“It leaves it all up to the Legislature to decide, but again proponents are saying you’ve got to make these utilities divest their generation, whether they be assets or power supply contracts in order to allow fair competition in all areas of the state,” he says.

“The real message I am trying to get out right now is that rural Nevada is a kind of unintended consequence,” he continues. “Energy choice was the brainchild of the casinos and Switch (a data processing firm that using huge amounts of electricity). They’re the ones who put this thing together. They’re the ones who largely funded it.”

Luttrell says industrial and commercial customers already have retail choice. Any customer with electrical needs greater than 1 megawatt, such as casinos, mines and industrial operations, already have the right to buy their own energy. “The problem, and this is why Switch and Sands and MGM and others don’t like it, is in order to exercise that right they have to pay an exit fee from the grid, from the NV Energy system and they don’t like paying that exit fee,” he says.

He notes that the Public Utilities Commission of Nevada demands exit fees to protect other customers, such as residential customers, who would have to bear the burden of paying for more generation capacity than is needed when large customers leave.

Voters will decide. If approved, lawmakers must make fair rules. 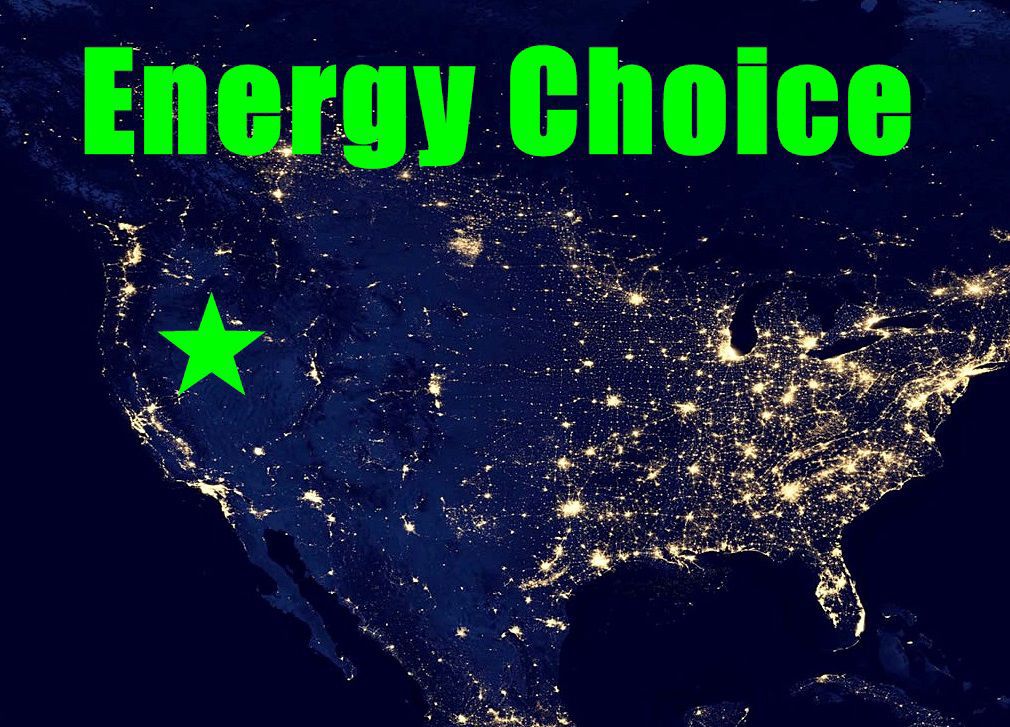 One of the big questions lingering about a constitutional amendment on the November ballot that would end electric power monopolies and create an open and competitive market electricity is: Just how will it affect customers of rural Nevada’s power cooperatives?

Question 3 on the 2016 General Election ballot — the Energy Choice Initiative (ECI) — passed by an overwhelming 72.4 percent to 27.6 percent. Because the measure would amend the state Constitution, it is back on the ballot this fall for final voter approval, but now a coalition headed by NV Energy is campaigning to defeat it.

David Luttrell — general manager of the Lincoln County Power District No. 1, president of the Nevada Rural Electric Association and a member of the Governor’s Committee on Energy Choice — said his power district has not joined the coalition opposing the initiative, but he is concerned the initiative’s impact on rural Nevada, should it pass, is not being adequately addressed.

“As we’re moving toward energy choice we were hopeful that there would be some recognition that the rural organizations, by definition, offer choice, so there are choices,” Luttrell said in a recent interview. “They were created by the people they serve for the people they serve. So at a very fundamental level that is choice.”

None of the rules will be written until and unless it passes again in November and goes to lawmakers. Luttrell said what is really going on at this stage is a kind of record building and fact finding.

“If you look at some of the comments of proponents of energy choice, one of the things they very strongly believe is that existing utilities do not and are not allowed to be retail energy providers, and their argument, I understand, I get the basis of their argument, is that an existing utility, retail energy provider, they do have an advantage that others that want to come into the area will not be able to compete against,” he said.

The proponents say it would be unfair and hinder real competition intended to lower overall power bills if the existing utilities are allowed to continue to generate power at the facilities they own and maintain existing contracts with outside suppliers.

While that argument is being made, it is not necessarily mandatory. The initiative itself simply requires the Legislature to pass a law providing an open, competitive retail electric energy market by July 1, 2023. The law must include provisions to reduce customer costs, protect against service disconnections and unfair practices, and prohibit the granting of monopolies for power generation, but could leave in place regulation of transmission or distribution systems.

On their website the backers of the initiative say it would be up to lawmakers to decide if current utilities would have to divest their generation facilities.

“In some energy choice states, energy consumers do not have to choose a new supplier. They can choose to remain with the incumbent utility. Other states have chosen to prohibit the utility from generating and selling power to consumers,” the ECI website offers. “In both cases, the utility retains ownership of the transmission and distribution grid and responsibility for maintaining the system and billing customers. Energy choice states simply give consumers the right to choose a new supplier, aggregate a community to purchase electricity, or generate their own power.”

But Paul Caudill, CEO of NV Energy, has told the Governor’s Committee on Energy Choice that, if voters approve the amendment, his company is ready to divest all generation assets and all purchase power agreements. He said the company has no interest in being a provider of last resort and will most likely transform into a wires only company.

NV Energy has suggested divestiture could result in so-called stranded cost of as much as $7 billion that would have to be paid by existing customers.

The Public Utilities Commission of Nevada estimates those stranded costs could cause electricity rates to rise $24.91 a month in Southern Nevada and $6.52 Northern Nevada for residential customers.

But a report by the Garrett Group presented to the Governor’s Committee on Energy Choice recently on behalf of the initiative backers said such a sell off should be profitable, and, when coupled with the recent tax law changes, should cause power bills to drop by $11.16 a month.

If rural power cooperatives have to divest their contracts for cheap hydroelectric power, Luttell says bills will necessarily soar.