A citizens’ rights organization has filed a lawsuit in Carson City District Court seeking an injunction to prevent the enforcement of the “Red Flag” provision of a law passed by Nevada lawmakers earlier this year.

Under the Red Flag section of the law persons accused of being a potential danger to themselves or others may have their firearms confiscated by order of a judge.

The suit, filed earlier this month, asks that a judge stop the law from taking effect as scheduled on Jan. 1.

“A person accused of being a danger may not even be aware of the court action against him, and his guns can be forcibly taken by law enforcement and his premises searched. Due process never enters into it,” a press release announcing the litigation quotes Mary Rooney, a plaintiff in the suit and a co-founder of NevadansCAN, as saying.

Another plaintiff and co-founder, Julie Chen Hereford, said, “The Red Flag provision violates both the Constitution of the United States and the Nevada State Constitution by giving judges the power to take away an individual’s right to keep and bear arms based on the accusation that the individual is dangerous and should not have a firearm.”

One of the principal arguments by the group’s suit is that a September ruling by the Nevada Supreme Court essentially found that gun ownership is such a fundamental right that it cannot be taken away merely by a judge’s ruling.

The court ruled a person charged with misdemeanor domestic battery is entitled to a trial by jury, because the state Legislature in 2017 enacted a law saying someone convicted of such a crime could have their right to keep and bear arms denied.

The U.S. Supreme Court has held that only those persons charged with a “serious” crime are entitled to a jury trial, which was defined as a crime carrying a sentence of greater than six months.

The unanimous Nevada opinion written by Justice Lidia Stiglich stated the change in state law to prohibit firearms possession by someone convicted of domestic violence effectively increases the “penalty” and makes the crime “serious” rather than “petty.”

“In our opinion, this new penalty — a prohibition on the right to bear arms as guaranteed by both the United States and Nevada Constitutions — ‘clearly reflect[s] a legislative determination that the offense [of misdemeanor domestic battery] is a serious one,’” Stiglich wrote in a case out of Las Vegas.

NevadansCAN argues that AB291 allows a secret process in which a judge can issue an order for gun seizure from an individual who has not been accused or convicted of violating any law and there is no role for a jury as the state high court deemed necessary.

The lawsuit itself declares, “This law makes mincemeat of the due process of law, will endanger law enforcement and the public, and is a tool for stalkers and abusers to disarm innocent victims. Empirical data is available that nearly a third of such orders are improperly issued against innocent people, in states with experience of the operation of such a law.”

There are seven legal processes that safeguard due process, the suit states, and this law deprives the accused of five of those: “notice; opportunity to make an oral presentation; means to present evidence; cross-examination and response to evidence; and the right of counsel at critical junctures.”

NevadansCAN’s suit notes that under such Red Flag laws those accused receive notice of the case against them when the police show up to confiscate their firearms. It also points out the accuser need never appear in court but merely submit an affidavit.

An injunction is needed. 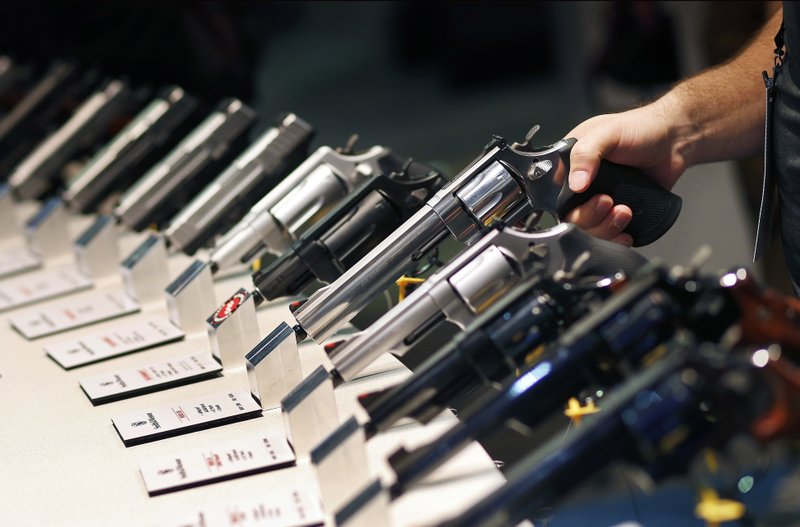 Earlier this month, the Nevada Supreme Court ruled a person charged with misdemeanor domestic battery is entitled to a trial by jury, because the state Legislature in 2017 enacted a law saying someone convicted of such a crime could have their Second Amendment right to keep and bear arms denied.

In keeping with a 1993 U.S. Supreme Court decision, our state’s high court had previously held that only those persons charged with a “serious” crime are entitled to a jury trial, which was defined as a crime carrying a sentence of greater than six months.

The unanimous opinion written by Justice Lidia Stiglich stated the change in state law to prohibit firearms possession by someone convicted of domestic violence effectively increases the “penalty” and makes the crime “serious” rather than “petty.”

“In our opinion, this new penalty — a prohibition on the right to bear arms as guaranteed by both the United States and Nevada Constitutions — ‘clearly reflect[s] a legislative determination that the offense [of misdemeanor domestic battery] is a serious one,’” Stiglich writes in a case out of Las Vegas.

The ruling concludes, “Given that the Legislature has indicated that the offense of misdemeanor domestic battery is serious, it follows that one facing the charge is entitled to the right to a jury trial.”

Attorney Michael Pariente, who represented appellate Christopher Anderson, told the Las Vegas newspaper, “I applaud the Nevada Supreme Court for unanimously doing the right thing. I think it’s a huge decision. They spoke with one voice, and it’s a good day for people who are charged with misdemeanor domestic violence. It forces the prosecutor to prove their case beyond a reasonable doubt to a 12-person jury instead of one single, sitting judge.”

But Nevada Attorney General Aaron Ford, whose office argued against allowing a jury trial in such cases (See clarification/correction below), put out a statement saying, “The devastating consequences of this decision cannot be overstated. Misdemeanor courts across this state are not equipped for jury trials, and this decision could have a widespread chilling effect on domestic violence victims coming forward. My office is working hand-in-hand with city, county, and federal officials to formulate a response and prevent the domestic violence epidemic in this state from further devastating our communities. The most immediate priority for my office is doing whatever it takes to ensure more people are not killed by their abusers as a result of this decision.”

Frankly, we have to ask: Why did it ever come to this?

The Webster’s definition of “all” is: “the whole amount, quantity, or extent of; every member or individual component of; the whole number or sum of; every.”

You see, Article 3, Section 2, of the U.S. Constitution states: “The Trial of all Crimes, except in Cases of Impeachment, shall be by Jury …”

The Sixth Amendment reads: “In all criminal prosecutions, the accused shall enjoy the right to a speedy and public trial, by an impartial jury …”

The Nevada Constitution says: “The right of trial by Jury shall be secured to all and remain inviolate forever …”

How the U.S. Supreme Court decided “petty” crimes do not warrant a trial by jury is beyond our feeble minds, but in any case the Nevada high court is to be applauded for deciding that the denial of the fundamental right to bear arms constitutes a serious matter and deserves a trial by a jury of one’s peers.

A recent editorial stated that Nevada Attorney General Aaron Ford’s office argued against allowing a jury trial in misdemeanor domestic violence cases. The office was not actively involved in the case in which the Nevada Supreme Court ruled that because the Legislature passed a law allowing the denial of Second Amendment rights for persons convicted in such cases that persons thus accused have the right to a jury trial because the charge is now serious rather than petty.

After the ruling, Ford’s office issued a statement in response to a media inquiry about possible victim impact. Only part of the statement appeared in the media. The full statement reads:

“One of the main areas of focus for my office is the protection of constitutional rights. That means all rights – including the 2nd Amendment right to bear arms and the 6th Amendment right to a jury trial. Accordingly, I understand, appreciate, and accept the analysis and decision of the Nevada Supreme Court on the intersection of these constitutional rights in the context of misdemeanor domestic battery charges which, if proven, result in the loss of the right to own firearms. I do not challenge that conclusion and, in fact, embrace it as an example of how sacred all constitutional rights (e.g., voting, reproductive health, etc.) are. That said, it cannot be denied that this new jury requirement will have very real and practical effects on domestic-violence prosecutions. To properly implement this new jury requirement, more resources are immediately needed, such as access to victim advocates, additional prosecutors and defense attorneys, training for laypersons who serve as justices of the peace, and many other needs. In the meantime, the sad fact remains – domestic violence victims are at risk. And our state is already ranked as one of the worst in the country for domestic violence fatalities. While we seek ways to implement this new jury requirement for misdemeanor defendants, my office will continue leveraging its resources and working with city, county, and federal officials to protect Nevada families from domestic violence.”