Ten years ago this month the U.S. Supreme Court reaffirmed the free speech portion of the First Amendment, declaring in the case of Citizens United v. Federal Election Commission that a federal law prohibiting people from spending their own money to make their political opinions known could not pass constitutional muster. The decision has been under constant attack by Democrats ever since.

The 5-4 ruling overturned a portion of the McCain-Feingold campaign finance law under which the FEC barred the airing of a movie produced by Citizens United that was critical of Hillary Clinton during the 2008 Democratic primary.

The late Justice Antonin Scalia succinctly wrote: “The (First) Amendment is written in terms of ‘speech,’ not speakers. Its text offers no foothold for excluding any category of speaker, from single individuals to partnerships of individuals, to unincorporated associations of individuals, to incorporated associations of individuals — and the dissent offers no evidence about the original meaning of the text to support any such exclusion. We are therefore simply left with the question whether the speech at issue in this case is ‘speech’ covered by the First Amendment. No one says otherwise.”

But Democrats have wheeled out a proposal to amend the Bill of Rights to exclude certain speech because it is paid for by people with money. It is wrongly called the Democracy for All Amendment.

Every Democratic member of the U.S. Senate — including Nevada Democratic Sens. Catherine Cortez Masto and Jacky Rosen — has signed on as sponsors. The amendment would allow Congress and the states to “distinguish between natural persons and corporations or other artificial entities created by law, including by prohibiting such entities from spending money to influence elections.”

Sen. Cortez Masto put out a press release this past summer saying the amendment is intended to get big money out of politics. “Citizens United opened the floodgates for big money in politics by wrongly allowing corporations and special interests to buy undue influence in American elections,” Nevada’s senior senator wrote. “It’s time the effects of this disastrous ruling were reversed. A constitutional amendment putting the democratic process back in the hands of voters will help ensure that our government represents the will of Americans, not just the wealthy few.”

Pay no attention to the fact spending alone does not necessarily determine the outcome of an election. President Trump was outspent two-to-one by the aforementioned Hillary Clinton.

Sen. Rosen over the weekend sent out an email noting the anniversary of Citizens United and saying, “It’s pretty simple: we’ve got to get big money out of politics. That’s why I’m supporting a constitutional amendment that would overturn Citizens United once and for all. … Our elections should be decided by the voters — but because of Citizens United, billionaires and corporate interests can spend as much money as they want to elect politicians to do their bidding.”

Oddly enough, the amendment concludes by stating, “Nothing in this article shall be construed to grant Congress or the States the power to abridge the freedom of the press.’’

Who do they think own the “press” in the United States? Billionaires and corporations, that’s who.

In fact, Justice Anthony Kennedy, who wrote the majority opinion in Citizens United, singled out the media exemption that was written into McCain-Feingold. Kennedy wrote, “The media exemption discloses further difficulties with the law now under consideration. There is no precedent supporting laws that attempt to distinguish between corporations which are deemed to be exempt as media corporations and those which are not. ‘We have consistently rejected the proposition that the institutional press has any constitutional privilege beyond that of other speakers.’”

Justice Kennedy concluded, “The First Amendment confirms the freedom to think for ourselves.”

Earlier this past year the House Democrats got into the act by putting forward the 600-page H.R. 1, dubiously dubbed “For the People Act,” which, along with other things, would require increased disclosure of donors and online advertisers. It is co-sponsored by all three of Nevada’s Democratic representatives — Dina Titus, Susie Lee and Steven Horsford.

Citizens United actually left in place certain financial disclosure requirements under McCain-Feingold. In fact, this prompted Justice Clarence Thomas to write a dissent in which he observed that disclosure requirements have spawned a cottage industry that uses donor information to intimidate, retaliate, threaten and boycott individuals and businesses with whom they disagree.

The Founders frequently engaged in anonymous speech and protected it with the First Amendment. The Federalist Papers were penned under pseudonyms. 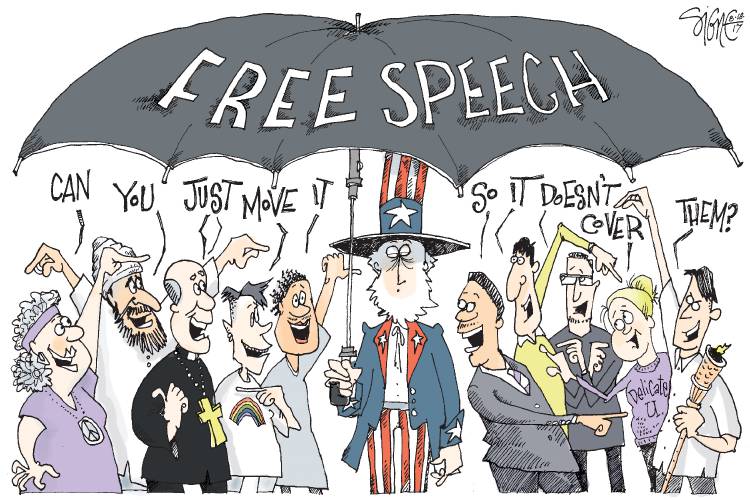 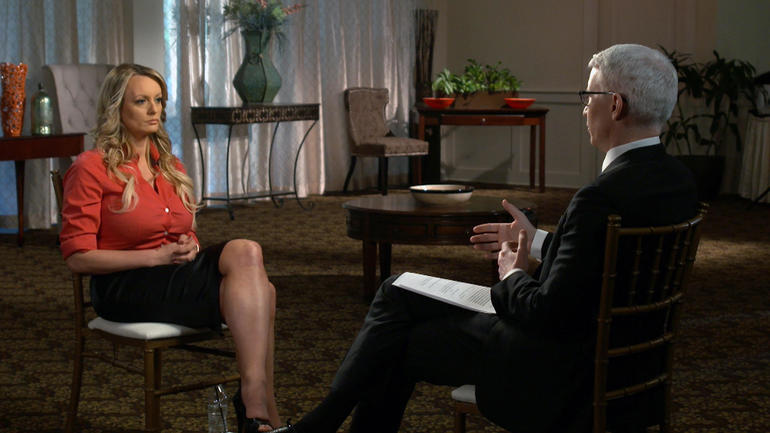 What did we learn from Watergate? It’s not the deed, it’s the cover-up.

So, never mind the salacious details of Stormy Daniels’ one-night-stand with Donald Trump. The $130,000 in hush money could be deemed an illegal campaign contribution.

Though Trump lawyer Michael Cohen says the money was not a campaign contribution, Trevor Potter, a former chairman of the Federal Election Commission, is not so sure.

Here is a snippet of transcript from his “60 Minutes” interview:

Trevor Potter: The payment of the money just creates an enormous legal mess for, I think, Trump, for Cohen and anyone else who was involved in this in the campaign.

Anderson Cooper: Are you saying that can be seen as a contribution to benefit a campaign?

Anderson Cooper: If the president paid Michael Cohen back, is that an in-kind campaign contribution that the president should’ve then reported?

Trevor Potter: It is. If he was then reimbursed by the president, that doesn’t remove the fact that the initial payment violated Cohen’s contribution limits. I guess it mitigates it if he’s paid back by the candidate because the candidate could have paid for it without limit.

Anderson Cooper: What if the president never reimbursed Michael Cohen?

Trevor Potter: Then he is still out on the line, having made a illegal in-kind contribution to the campaign.

Anderson Cooper: You’re saying this is more serious for Michael Cohen if the president did not pay him back? 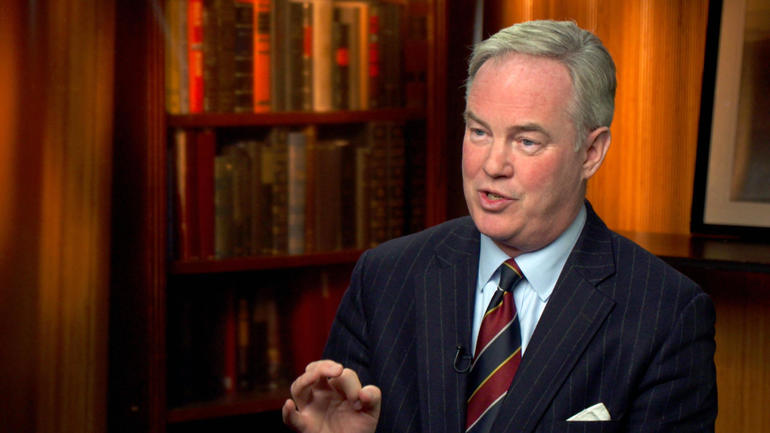 Harry Reid’s home in Washington, D.C., where he paid staff holiday bonuses out of campaign funds.

Remember how Harry Reid got in trouble in 2006 for using campaign funds to pay for personal expenses — the holiday bonuses for the staff at his Washington, D.C., condo in the Ritz Carlton? He had to reimburse his campaign fund with $3,300 of his “own” money.

The Federal Elections Commission sent Reid a letter on Friday demanding that he explain campaign spending on “holiday gifts” listed in his final quarter spending report for 2013.

Additional information is needed for the following 1 item(s):

– Itemized disbursements must include a brief statement or description of why
each disbursement was made. Please amend Schedule B supporting Line 17 of
your report to clarify the following description: “holiday gifts.” For further
guidance regarding acceptable purposes of disbursement, please refer to 11
CFR 104.3(b)(4)(i)(A).

Reid was given until April 25 to respond.

By the way, the folks on the Reid campaign eat high on the hog. There are dozens listings of expensive meals at expensive restaurants across the country.

Online searches for clues as to just who Ryan Elisabeth is were futile.

The Obama administration just keeps on barreling down the road to absolute dictatorship.

When Obama didn’t like the fact Congress would not pass the DREAM Act and let children brought into the country illegally have the same rights as citizens, he issued an executive fiat.

2010 State of the Union address

When parts of the ObamaCare law that was passed by Congress did not suit him, he waived whatever section of the law suited him. Repeatedly.

When Congress would not pass legislation to shut down coal-fired power plants, he had his EPA issue rules that did the same thing.

When not enough Republicans would accede to his packing of the D.C. appeals court, he had Harry Reid nuke the filibuster.

Now his IRS is rewriting the tax-exemption rules for 501(c)(4)s to overturn the Supreme Court’s decision in Citizens United v. FEC.

The FEC went after Citizens United, a 501(c)(4), for airing a movie about Hillary Clinton within 30 days of the 2008 primary election. The Supreme Court said that was unconstitutional under the First Amendment.

The IRS is proposing a change in the rules to say:

“Under the proposed definition, any public communication that is made within 60 days before a general election or 30 days before a primary election and that clearly identifies a candidate for public office (or, in the case of a general election, refers to a political party represented in that election) would be considered candidate-related political activity. These timeframes are the same as those appearing in the Federal Election Campaign Act definition of electioneering communications.”

Does it get any more blatant than that?

In his 2010 State of the Union address, Obama, facing several member of the Supreme Court in the audience, declared:

“With all due deference to separation of powers, last week the Supreme Court reversed a century of law that I believe will open the floodgates for special interests — including foreign corporations — to spend without limit in our elections. (Applause.) I don’t think American elections should be bankrolled by America’s most powerful interests, or worse, by foreign entities. (Applause.) They should be decided by the American people. And I’d urge Democrats and Republicans to pass a bill that helps to correct some of these problems.”

No bill. No problem. Just have the IRS rewrite the rules. Just dictate from the Oval Office.