The acting head of the Department of Homeland Security (DHS) has ordered all the agencies under his purview to review the ramifications of state laws that allow illegal aliens to obtain driver authorization cards and restrict sharing data with immigration enforcement authorities.

Nevada is one of those 14 states.

Lawmakers passed Senate Bill 303 in 2013 and it was signed by Gov. Brian Sandoval. Ostensibly, the bill was intended to reduce the number of uninsured motorists on the roads, because it is difficult to obtain car insurance if one can’t legally drive.

But the bill, now ensconced in law as NRS 481.063, also dictates that the DMV “shall not release any information relating to legal presence or any other information relating to or describing immigration status, nationality or citizenship from a file or record relating to a request for or the issuance of a license, identification card or title or registration of a vehicle to any person or to any federal, state or local governmental entity for any purpose relating to the enforcement of immigration laws.” 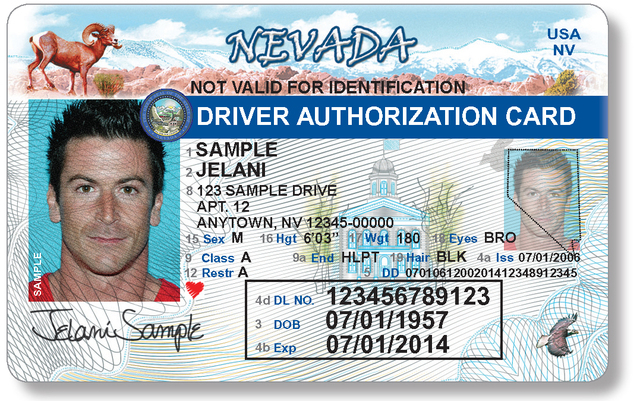 This apparently was intended to assuage illegal aliens of the notion that obtaining a driver authorization card — which allows one to drive in Nevada but cannot be used for such things as boarding an aircraft — would subject them to actual enforcement of existing immigration law.

A March article in The Nevada Independent reported that there were at the time 49,000 active driver authorization cards issued in the state and another 3,500 learners’ permits for the cards.

What prompted Chad Wolf, the acting director of Homeland Security, to issue his memo this past week was the passage of similar laws in New York and New Jersey recently, according to The Daily Caller.

“Accordingly, I am instructing each operational component to conduct an assessment of the impact of these laws, so that the Department is prepared to deal with and counter these impacts as we protect the homeland,” Wolf’s memo read. Those components include U.S. Customs and Border Protection, the Coast Guard and the Transportation Security Administration.

After passage of the illegal alien driver authorization law in New York numerous county clerks pointed out that such a policy could pave the way for voter fraud, identity theft and even terrorism.

“Laws like New York’s greenlight law have dangerous consequences that have far reaches beyond the DMV,” Homeland Security spokeswomen Heather Swift was quoted as saying. “These types of laws make it easier for terrorists and criminals to obtain fraudulent documents and also prevent DHS investigators from accessing important records that help take down child pornography and human trafficking rings and combat everything from terrorism to drug smuggling.”

Wolf’s memo ordered agencies to determine what DMV information is currently available and what the consequences would be if that data were restricted.

“Never before in our history have we seen politicians make such rash and dangerous decisions to end all communication and cooperation with the Department of Homeland Security law enforcement,” The Daily Caller further quoted Swift. “The Secretary is prepared to take every measure necessary to ensure the safety and security of the homeland and we look forward to the recommendations of our agents and officers in the field.”

Las Vegas newspaper columnist Victor Joecks pointed out in an April 2018 column that the DMV uses the same forms for those getting a driver authorization card as for those getting a regular driver’s license. At the bottom of the form is a voter registration application. The form asks whether the applicant is a citizen and old enough to vote, but requires no proof whatsoever. Neither does the Secretary of State’s office, which processes the voter registration.