The usual suspects in the self-styled environmental groups predictably collapsed into palpitating conniptions this past week when the Trump administration announced its final rule rolling back the Obama-era rule that overreachingly defined the waters of the United States (WOTUS) covered by the Clean Water Act of 1972 as every stream, ditch, wetland or muddy hoof print that might ever eventually spill a few drops of water into any rivulet.

Brett Hartl, government affairs director at the Center for Biological Diversity, wailed, “This sickening gift to polluters will allow wetlands, streams and rivers across a vast stretch of America to be obliterated with pollution. People and wildlife need clean water to thrive. Destroying half of our nation’s streams and wetlands will be one of Trump’s ugliest legacies. We’ll absolutely be fighting it in court.”

Massachusetts Sen. Elizabeth Warren, a Democratic candidate for president, fired off a Twitter rant, “Government works great for giant corporations that want to dump chemicals & toxic waste into streams & wetlands. It’s just not working for families that want to be able to drink water without being poisoned. This is corruption, plain and simple.”

But Environmental Protection Agency Administrator Andrew Wheeler, while announcing the rule change at a conference of the National Association of Home Builders in Las Vegas, pointed out, “All states have their own protections for waters within their borders, and many regulate more broadly than the federal government. … Our new rule recognizes this relationship and strikes the proper balance between Washington, D.C., and the states. And it clearly details which waters are subject to federal control under the Clean Water Act and, importantly, which waters falls solely under the states’ jurisdiction.”

The new rule — prepared by the EPA and the Army Corps of Engineers — is to take effect in 60 days, though litigation challenging it is a certainty.

The Obama administration’s 2015 definition of WOTUS covered about half of the nation’s wetlands and many streams that flowed only after heavy rainfall and required farmers and developers to seek expensive and time-consuming permits before turning so much as a shovel of dirt.

The Clean Water Act made it unlawful to discharge any pollutant that could eventually reach navigable waters unless a permit was first obtained. The 2015 WOTUS definition, for example, barred a Minnesota company from mining peat on a wetland 120 miles from the Red River.

Nevada and a dozen other states in 2015 obtained an injunction from a federal judge blocking enforcement of the sweeping WOTUS rule. Then-Nevada Attorney General Adam Laxalt said of the injunction, “This important order, at a minimum, delays implementation of an unwise, unjustifiable and burdensome rule, and protects Nevada’s landowners, farmers and developers from job losses and increased energy prices, until the final rule can be comprehensively fought in court.” The EPA decided the injunction applied only to those 13 states.

The rule change has been in the works since shortly after President Trump took office.

In a speech to the American Farm Bureau two weeks ago Trump talked about the rule change, saying, “And, today, I’m proud to announce that I am taking yet another step to protect the water rights of American farmers and ranchers. Under the previous administration, the Army Corps of Engineers proposed a new Water Supply rule that would give the federal government vast and unlimited power to restrict farmers’ access to water. That’s not a good thing. Is anybody happy with being restricted to water if you have a farm? Please stand up if you are happy about that. Because this authority rightfully belongs to the states, not the bureaucrats in Washington, D.C.”

The nation’s waters are not being turned over to corporations for dumping chemicals and toxins. The power to regulate and protect the water is simply being returned to the states, which under the principles of federalism, is where they rightfully belong.

In fact, Trump’s executive order of February 2017 that started the rule change process is titled: “Presidential Executive Order on Restoring the Rule of Law, Federalism, and Economic Growth by Reviewing the ‘Waters of the United States’ Rule.” 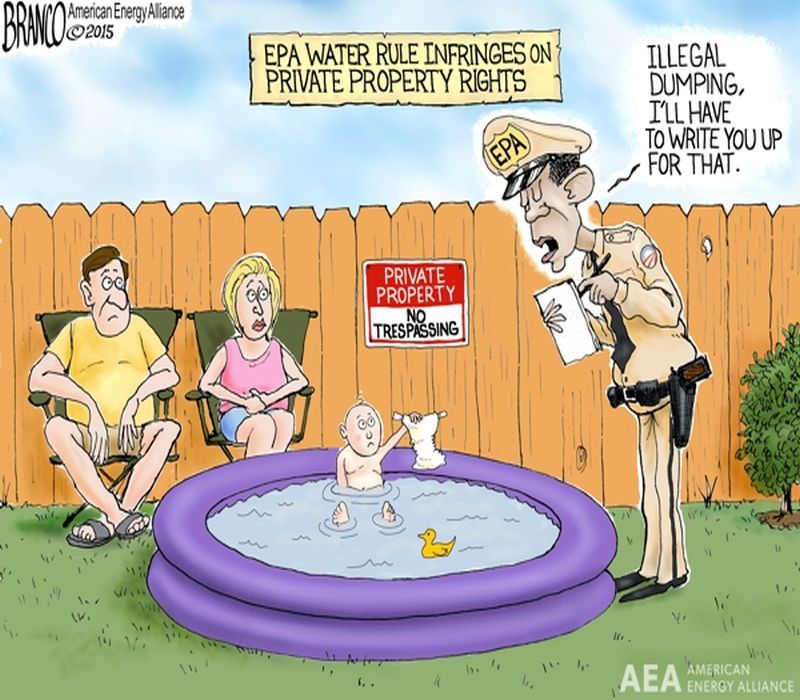 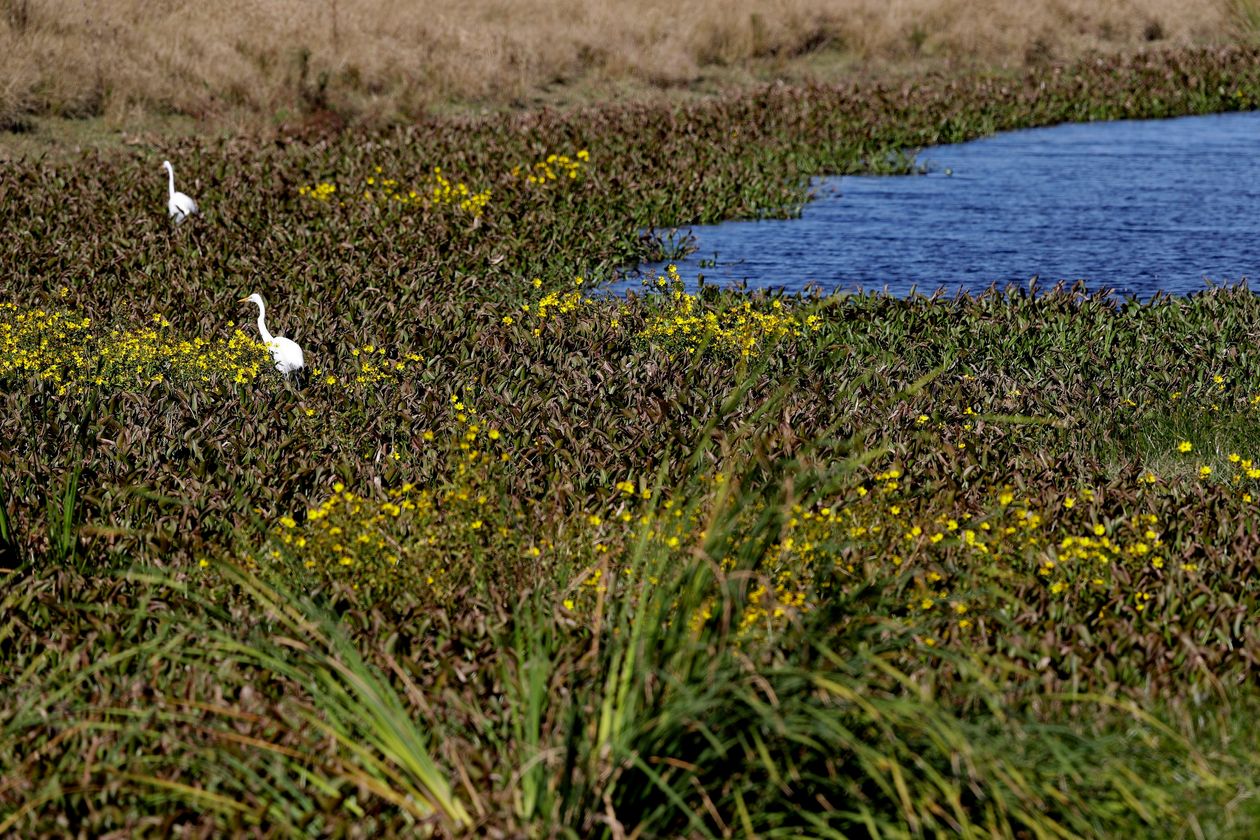 The Trump administration’s Environmental Protection Agency has finalized the repeal of yet another Obama-era regulatory overreach, specifically rules that defined every stream, ditch, seasonal puddle and muddy hoof print as being covered by the restrictions of the Clean Water Act of 1972 that was intended to prohibit pollutants being dumped into navigable waters — known as the waters of the United States or WOTUS.

First announced in December but finalized this past week, EPA Administrator Andrew Wheeler said, “Our revised and more precise definition will mean that farmers, property owners and businesses will spend less time and money determining whether they need a federal permit.”

When the change was first proposed, Wheeler said, “Property owners will be able to stand on their property and determine what is federal water without having to hire outside professionals.”

“The 2015 WOTUS Rule was an illegal effort by the federal government to assert control over both land and water, significantly impacting our ability to implement vital conservation practices,” Houston said. “After years spent fighting the 2015 WOTUS Rule in the halls of Congress, in the Courts, and at the EPA, cattle producers will sleep a little easier tonight knowing that the nightmare is over.”

American Farm Bureau Federation President Zippy Duvall released a statement saying, “No regulation is perfect, and no rule can accommodate every concern, but the 2015 rule was especially egregious. We are relieved to put it behind us. We are now working to ensure a fair and reasonable substitute that protects our water and our ability to work and care for the land. Farm Bureau’s multi-year effort to raise awareness of overreaching provisions was powered by thousands of our members who joined with an array of allies to achieve this victory for clear rules to ensure clean water.”

The change brings the EPA more in line with what the U.S. Supreme Court has said is appropriate. In 2010 the Hawkes Co., which mines peat for use on golf courses among other things, applied for a permit to mine peat on a 530-acre tract of property it owns in Minnesota. The Army Corps of Engineers told the company they would have to do numerous tests that would cost more than $100,000. The Corps said the wetlands had a “significant nexus” to the Red River of the North, located some 120 miles away. Failure to comply carried a threat of fines amounting to $37,000 a day and criminal prosecution.

In a concurring opinion in that case, Supreme Court Justices Anthony Kennedy, Clarence Thomas and Samuel Alito, said that the EPA and Corps “ominous reach” on interpreting the Clean Water Act “continues to raise troubling questions regarding the Government’s power to cast doubt on the full use and enjoyment of private property throughout the Nation.”

Chief Justice John Roberts during arguments noted the arduousness of compliance. He said a specialized individual permit, such as the one sought by Hawkes, on average costs $271,596 and 788 days to complete, not counting any mitigation costs that might be required. He said the permitting process can be “arduous, expensive, and long.” He failed to mention that is also often futile.

Then-Nevada Attorney General Adam Laxalt, who along with 22 other attorneys general filed an amicus brief in this case, applauded the judgment at that time, saying, “The Obama administration seems determined to move as far and as fast as possible to unilaterally change our constitutional system and our congressional laws. … Fortunately in this case, our checks and balances have protected Nevadans from truly unprecedented federal overreach.”

Nevada’s current Democratic Attorney General is being quoted by the press as saying, “At this time, Nevada believes it would be in its best interest to remain under the pre-2015 WOTUS rule,” and the Nevada Department of Environmental Protection is said to agree.

Though this change in the rules used by the EPA is welcome, some future administration could easily overturn them. Congress needs to act to clarify the Clean Water Act. Previously, the House and Senate passed resolutions that would have blocked the EPA water rules, but in January 2016 the Senate failed to override Obama’s veto.