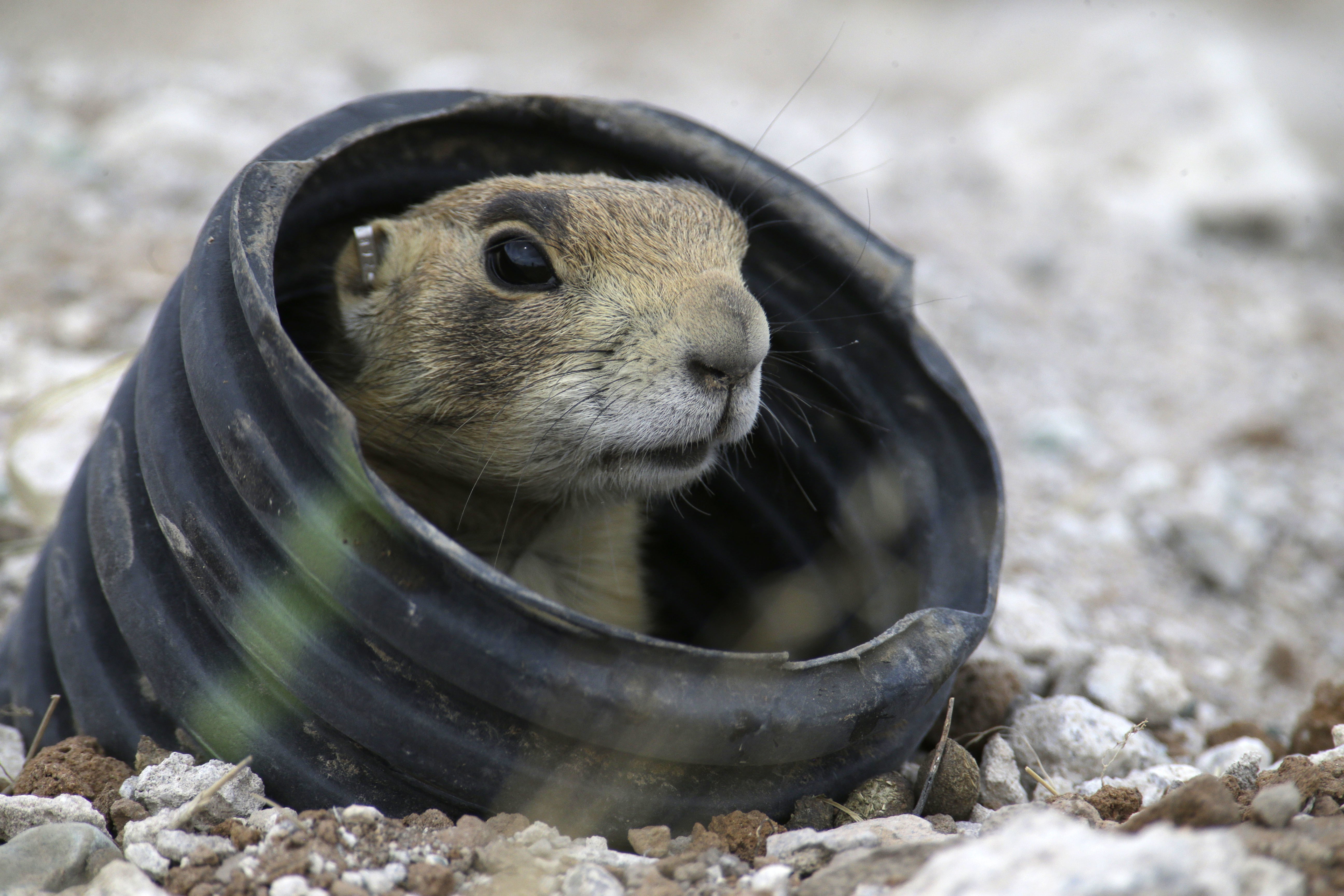 A Utah prairie dog peeks out of an artificial burrow after arriving at a remote site in the desert, some 25 miles away from Cedar City, Utah. (AP pix via WSJ)

If words can mean anything anyone says they mean, then words are meaningless. That is what the 10th U.S. Circuit Court of Appeals has done with the Commerce Clause of the Constitution.

The appellate court overturned a federal judge who found that the Commerce Clause does not give Congress the power under the Endangered Species Act (ESA) to regulate a species that exists only within the boundaries of one state and has no commercial value whatsoever — specifically the Utah prairie dog.

Nevada has joined with Utah and 21 other states to ask the U.S. Supreme Court to strike the circuit court ruling, saying that if the ruling stands “then Congress has virtually limitless authority, and the Tenth Amendment is a dead letter,” as well as the concept of federalism. (prairiedogamicusbrief)

If Nevada is to have any control over any economic activity within its borders, which include numerous endangered and threatened species, it is vital that the high court reverse this Constitution-rendering exercise in legerdemain.

The circuit court judges stretched the meaning of the Commerce Clause — which gives Congress the power to regulate interstate commerce in order to promote commerce by preventing interstate tariffs — to include anything Congress could imagine in its wildest flights of fantasy.

“We conclude that Congress had a rational basis to believe that regulation of the take of the Utah prairie dog on nonfederal land is an essential part of the ESA’s broader regulatory scheme which, in the aggregate, substantially affects interstate commerce,” the circuit court ruled, without any hint as whether that conclusion was at all rational rather than delusional sophistry.

The judges dived further into base speculation by stating, “‘ESA’s drafters were concerned by the “incalculable” value of the genetic heritage that might be lost absent regulation,’ as well as observing that the majority of takes of species ‘result from economic activity …’” Might that incalculable value be zero? Species became extinct before mankind arrived on the scene.

The amicus brief filed by the attorneys general of 23 states paraphrased the 10th Amendment in the Bill of Rights by stating, “The Framers correctly concluded that both restraints – separation of powers and federalism – are necessary to preserve individual liberty and avoid tyranny. So powers not given to the federal government are reserved for the States and the people. But federalism serves its purposes only if the federal-state interplay remains properly balanced. That means courts must ensure that the federal government operates only within its enumerated powers so the States can function within their proper spheres.”

Adding insult to constitutional injury is the fact the state of Utah was actually doing a better job of protecting the prairie dog population than the U.S. Fish and Wildlife Service.

The Fish and Wildlife rules made it a federal crime to “take” the Utah prairie dog — which means to harass, harm, pursue, hunt, shoot, wound, kill, trap, capture or collect — without first obtaining time-consuming and expensive federal permits. Meanwhile, the burrowing prairie dogs were damaging parks, sports fields, airports and cemeteries and preventing the construction of homes and businesses. Especially hard hit is the small college town Cedar City.

During the time after the federal judge blocked the Fish and Wildlife rules the state of Utah spent a considerable amount of money to move the prairie dogs from population centers to remote and safer conservation areas, allowing the population to boom from a low of 24,000 in 1984 to an estimated 80,000 today.

The original lawsuit was brought by 200 private property owners calling themselves People for the Ethical Treatment of Property Owners. They were represented by the Pacific Legal Foundation (PLF), which litigates on behalf of personal liberty and property rights.

“For decades, the federal government’s harmful Utah prairie dog regulation has prohibited residents of Cedar City from doing things that most of us take for granted in our own communities,” PLF attorney Jonathan Wood is quoted as saying in a press release. “They have been blocked from building homes, starting small businesses, even protecting playgrounds, an airport, and the local cemetery from the disruptive, tunneling rodent.

If the words of the Constitution are so malleable, it has no meaning and Congress is our dictator.

Attorney Mark Rienzi, who represents the Little Sisters of the Poor, speaks outside the 10th U.S. Circuit Court of Appeals, in Denver. (AP photo via WSJ)

Some judges don’t just practice law, they are also Talmudic scholars — better capable of determining matters of conscience than adherents of the religion itself.

The Little Sisters of the Poor in Denver sued to avoid complying with Obamacare’s mandate that all insurance provide contraceptives and refused to comply with the so-called opt-out contract in which their insurer is required to cover birth control for free. They essentially argued that signing the contract made them complicit in a sinful act.

The 10th U.S. Circuit Court of Appeals ruled this week: “Although Plaintiffs allege the administrative tasks required to opt out of the Mandate make them complicit in the overall delivery scheme, opting out instead relieves them from complicity. Furthermore, these de minimis administrative tasks do not substantially burden religious exercise for the purposes of RFRA (Religious Freedom Restoration Act).”

The Little Sisters’ consciences and souls are of no consequence.

If they refuse to sign the opt-out contract, each of their shelters is subject to fines of $2.5 million a year. That’ll really make them poor.

“In other words, the Little Sisters believe they are commissioning a moral transgression,” a Wall Street Journal observes in an editorial under the headline, “Big Brother of the Poor.” “The Tenth Circuit is telling them, no, the opt out is ‘unremarkable.’ Yet standard judicial practice is to refrain from reaching unresolvable questions of theology or ethics, and RFRA was written to give the benefit of the doubt to the faithful.”

In Burwell v. Hobby Lobby the Supreme Court observed: “The Hahns and Greens believe that providing the coverage demanded by the HHS (Health and Human Services) regulations is connected to the destruction of an embryo in a way that is sufficient to make it immoral for them to provide the coverage. This belief implicates a difficult and important question of religion and moral philosophy, namely, the circumstances under which it is wrong for a person to perform an act that is innocent in itself but that has the effect of enabling or facilitating the commission of an immoral act by another. Arrogating the authority to provide a binding national answer to this religious and philosophical question, HHS and the principal dissent in effect tell the plaintiffs that their beliefs are flawed. For good reason, we have repeatedly refused to take such a step.”

This case is surely headed to the Supreme Court where it should stand up for the Free Exercise Clause of the First Amendment.