To their eternal ignominy Nevada Democratic caucus voters have helped jump start the presidential candidacy of self-identified democratic-socialist Bernie Sanders, a man who could not have voted for himself if he lived here because he is not a registered Democrat.

The Vermont independent senator won 47 percent of the state’s equivalent delegates, picking up strong pluralities in 10 counties, a 78 percent majority in Eureka and a 58 percent majority in Esmeralda. Tom Steyer won Mineral, while Pete Buttigieg took Douglas, Lincoln, Nye and Pershing. Steyer and Buttigieg both dropped out after poor showings in South Carolina this past weekend.

With Super Tuesday this week there were 1,344 delegates at stake in 14 states — 415 in California alone — on the way to the 1,991 needed to win the Democratic nomination outright. Biden now leads Sanders by 75 delegates.

In a recent op-ed in the Las Vegas newspaper Sanders even promised: “Together, we will make sure that no child in Nevada goes hungry. Hundreds of thousands of Nevada school children are in need of school lunches. Instead of saddling families with debt and stigma, we will fund universal school meals — breakfast, lunch and dinner.”

In Bernie’s brave new world, as in Aldous Huxley’s, “parent” is a dirty word. The state will take care of everything and everyone will be just a cog in the socialist machine.

To pay for it all, he’ll just tax the rich, like in that old rock tune “I’d Love to Change the World” by Ten Years After: “Tax the rich, feed the poor/ ‘Til there are no rich no more.” What will he do when he runs out of rich people?

Sanders is reportedly especially embraced by so-called millennials who apparently have no concept of the price of socialism as recorded repeatedly in history — the re-education camps, the gulags, the purges, the lack of free speech or press, the lack of private property — such as the millennials’ beloved cellphones.

According to a recent Heritage Foundation article, a YouGov survey reported that 44 percent of young people between the ages of 16 and 29 would prefer to live in a socialist nation rather than a capitalist country.

“Another seven percent would choose communism. However, the same poll revealed that only 33 percent of the respondents could correctly define socialism as based on the common ownership of economic and social systems as well as the state control of the means of production,” the article states. “What most millennials mean by ‘socialism’ seems to be a mix of our welfare state and what they perceive to be Swedish democratic socialism. But Sweden and the other Scandinavian countries including Denmark favor the free market and are content with private rather than government ownership of their major industries. However, Danish domestic spending including comprehensive health care has a high price — a top personal income tax of 57 percent.”

Sanders himself has taken recently to apologizing for the excesses of socialist regimes by trying to point to some positives.

“We’re very opposed to the authoritarian nature of Cuba but you know, it’s unfair to simply say everything is bad. You know?” Sanders said on CBS’ “60 Minutes” in a recent interview. “When Fidel Castro came into office, you know what he did? He had a massive literacy program. Is that a bad thing? Even though Fidel Castro did it?”

They might be able to read, but just ask the throngs of Cuban expatriates in Florida what they were allowed to read.

How many Sanders supporters have any inkling of the carnage due to socialism? According to “The Black Book of Communism,” published by Harvard University Press, the total deaths due to socialist dictators from Stalin to Mao to Pol Pot to Castro and others is 100 million. Still want socialism? 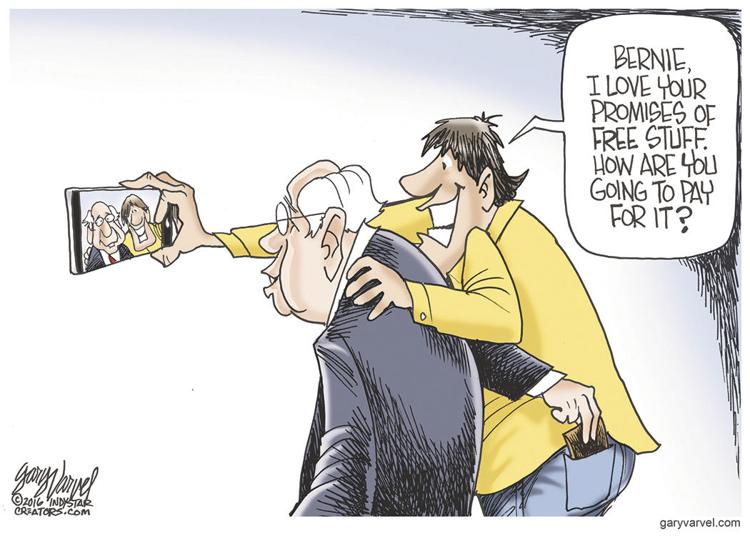 4 comments on “Newspaper column: Could a socialist be the Democratic presidential nominee?”