There is always one issue on which both parties in Washington never fail to agree — more and more spending.

President Trump’s proposed 2021 fiscal year budget of $4.8 trillion includes a deficit of $1 trillion dollars, almost double the deficit for the Obama administration’s final year in office, but the squawking isn’t about the deficit and the mounting national debt. It is that there is not enough spending.

While the Nevada delegation was largely pleased with the fact the proposed budget doesn’t include spending to license Yucca Mountain as a nuclear waste dump for a change, but rather includes $27.5 million for “exploring innovative approaches for storing long-term waste,” our Democratic delegates complained about spending “cuts.”

Of course, there is the possibility that those innovative approaches might not be as good as arid, isolated Yucca Mountain in a county hungry for well paying jobs.

According to the Las Vegas newspaper, during a Senate Finance Committee hearing Nevada’s Democratic senior Sen. Catherine Cortez Masto “grilled” Treasury Secretary Steve Mnuchin on proposed budget cuts of nearly $200 million for the Supplemental Nutrition Assistance Program, that’s food stamps, and reductions of $90 million in Social Security programs. Mnuchin replied that those were not cuts at all but rather decreases in the projected increases in spending.

During a House Ways and Means Committee hearing, again according to the Las Vegas newspaper, Democratic 4th Congressional District Rep. Steven Horsford accused the Trump administration of using the social program cuts to offset $1.9 trillion in tax cuts pushed through by Republicans earlier.

“Sweeping money from the children of Nevada to balance your budget on the backs of working Americans after giving a tax cut to the very wealthy and big corporations is not going to happen,” Horsford was quoted as saying.

According to a recent Wall Street Journal editorial, revenues have continued to rise “despite” the tax cut. Or perhaps a more robust economy is generating more tax revenue “because” of the tax cuts.

“Revenues are expected to be 16.7% of GDP, not far off the 17.2% before the tax cut,” the Journal editorial points out. “The problem is that outlays are rising faster — to 21.6% of GDP this fiscal year, the most since 2012 and well above the Bush and late Clinton years.” It’s the spending.

The Trump budget proposal also makes some rosy and unlikely assumptions. In another article, Wall Street Journal columnists note that the 10-year forecast in the Trump budget projects $50.7 trillion in federal revenue, which is 7 percent more than the Congressional Budget Office forecast, which assumes the 2017 tax cuts will expire as scheduled in 2025. Trump’s budget assumes the tax cuts will be extended. Not likely if the Democrats continue to hold the House.

Meanwhile, a New York Times writer also raises questions about the Trump budget’s overly optimistic forecasts for economic growth, pointing out that the Trump budget foresees the total national debt declining from the current 79 percent of the overall economy to 66 percent in 2030. The Congressional Budget Office sees it rising to 98 percent, a level not reached since 1946, the end of World War II.

It is time to rein in the spending and sending the bill to the next generation, which might have to default. 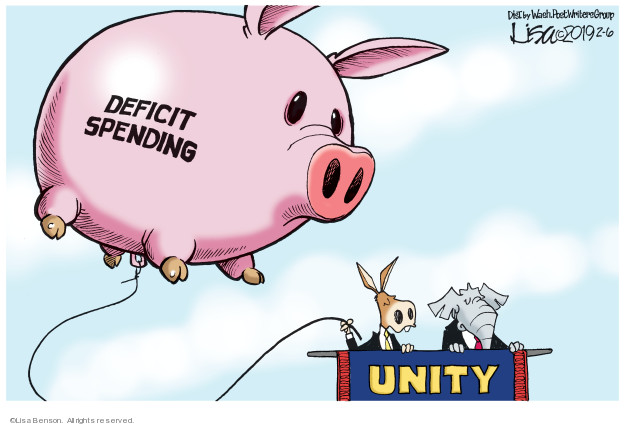 4 comments on “Editorial: Federal spending by both parties must be reined in”