This past week Donald Trump became only the third president to be impeached by the U.S. House of Representatives. Neither of the other two were convicted by the Senate — Andrew Johnson in 1868 and Bill Clinton in 1999 — and neither will Trump, because Republicans hold a majority of Senate seats and there is no way to achieve the necessary two-thirds majority to remove Trump from office.

Not a single House Republican voted in favor of either article of impeachment, because they were flimsy to the point of being wisps in the Democratically driven wind. Even a couple of Democrats rejected them.

Both “abuse of power” and “obstruction of Congress” are so nebulous that they can be defined as disagreeing with someone or anyone.

“Through their depraved actions today, crazy Nancy Pelosi’s House Democrats have branded themselves with an eternal mark of shame, and it really is, it’s a disgrace,” Trump correctly informed a rally in Battle Creek, Mich., shortly after the vote, according to the Washington Examiner. “They think the Washington swamp should be able to veto the results of an election. That’s what they think. There’s never been a time like this.”

What constituted “abuse of power” was Trump suggesting in a July telephone conversation with the newly elected president of the Ukraine that someone should investigate past dealings by 2020 presidential candidate Joe Biden and his son Hunter. “So, if you can look into it …” Trump said, according to the transcript. This was not a request to “dig dirt” on a potential political opponent as so many in the press have described it, but rather a suggestion that an investigation might be warranted. Trump was accused of withholding military aid to coerce the investigation.

Since Trump has been investigated by countless government bureaucracies since he raised his hand to take the oath of office, might that be construed as abuse of power and an attempt to influence the next election?

As for “obstruction of Congress,” The Wall Street Journal notes that this amounts to nothing more than Trump going to court to protect the powers of his office from politically motivated snooping, something many presidents have done, including Clinton and Barack Obama. Democrats didn’t give the courts a chance to rule on what the law is.

Nevada’s Democratic representatives — Dina Titus, Steven Horsford and Susie Lee — all voted for both articles of impeachment. In a statement Titus said of Trump, “He tried to rig the 2020 elections by soliciting foreign interference, and then engaged in an unprecedented cover-up once he got caught. No president can be permitted to abuse the power of the office for personal, political gain, nor try to hide his misdeeds by demanding that his subordinates withhold key documents and refuse to testify before Congress.”

Republican Congressman Mark Amodei, who represents northern Nevada voted “nay” on both articles. Amodei noted in a statement explaining his votes, “What happened after the phone call is also essentially uncontested. Ukrainian aid was slowed for several weeks but provided by mid-September. There was a meeting between President Trump and President (Volodymyr) Zelenskyy. There is no evidence that the Ukrainian Government has investigated the Bidens and therefore, no announcements regarding the same.”

As for obstructing Congress, Amodei listed a litany of refusals by the Obama administration to cooperate with requests from Congress — everything from Fast & Furious gun dealings with drug cartels to the Iran Nuclear Deal to Obamacare subsidies to Solyndra and Benghazi.

Regarding the attack in Benghazi that left four Americans dead, Amodei quoted the White House counsel’s explanation for refusing to answer questions from Congress, “If the President were to answer your questions, his response would suggest that Congress has the unilateral power to demand answers from the President about his official acts.” Which is what Congress just tried to do with Trump.

The congressman concluded that he didn’t believe Obama should have been impeached for obstructing Congress and neither should Trump.

This entire process has been an affront to American voters, who should remember how their current representatives abused the system for the sake of political power come the November election. 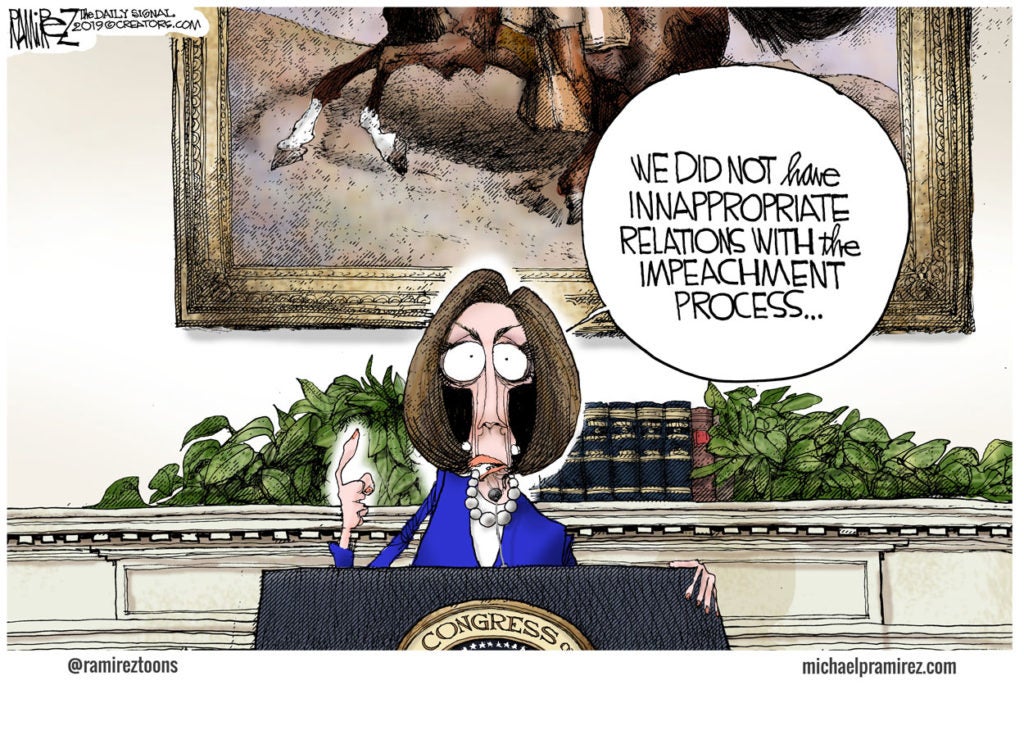 13 comments on “Newspaper column: Articles of impeachment are flimsy ploys”