The House this past week passed a bill that would increase the federal minimum wage to $15 an hour by 2025 and phase out the sub-minimum wage currently allowed for tip earners. The vote was 231-199, largely along party lines.

While all three of Nevada’s Democratic representatives put out statements bragging about voting for the Raise the Wage Act and citing how many people in their districts would be eligible for pay hikes under the law, Republican Mark Amodei, who represents Northern Nevada, warned of the many problems that the bill could create and said the only good thing about it is that it is unlikely to pass in the Senate.

“It makes a good campaign ad in certain neighborhoods, I guess,” Amodei said during a conference call on Friday. He said the bill, while it may raise hourly wages for some by 107 percent, others will lose their jobs entirely or have their hours cut. In fact, the Congressional Budget Office (CBO) estimated that somewhere between 1.3 million and 3.7 million would lose their jobs.

Amodei said the bill is especially problematic for Nevada because a third of the workforce is tipped workers. “In a state that has 45 million-plus people a year who come here for the resort industry … they tip people in the housekeeping industry, they tip people in restaurants, they tip people in casinos,” the congressman noted, adding that the current federal minimum wage for tipped workers is $2.13 an hour and the increase to $15 an hour would constitute a 600 percent increase.

“When you say everybody is going to make 15 bucks an hour you’re picking winners and losers,” Amodei said. “Because what do business people do in response to that? They take a look at, first of all they’re going to raise prices, which by the way is kind of that vicious circle — the good news is you’re making more money, the bad news is it costs you more on everything this impacts.”

A Cato Institute analysis in 2012 found that a 10 percent increase in the U.S. minimum wage raises food prices by up to 4 percent. Imagine what 107 percent would do.

Amodei also noted that the National Restaurant Association reports that almost two-thirds of restaurant owners, when faced with higher minimum wage requirements, reduce hours for workers, half eliminated jobs and all raised prices. “So the good news is you’re getting 15 bucks and hour, the bad news is you’re not going to work as many hours,” he said.

One study found the average low-wage worker in Seattle lost $125 a month because the minimum wage was raised to $15 an hour.

“Here’s the bottomline for me,” Amodei said, “The Nevada Legislature did a minimum wage bill. It did a couple of things in my impression, it was measured, it was factored in over some time, which is a reasonable thing when you talk about these sorts of things, and it went to an amount ($12 an hour instead of $15) … and the biggest thing they did was they did not mess with a third of the workforce in Nevada by basically throwing the whole tips thing on its ear. This bill does none of that.”

As for Nevada’s Democratic delegation, everything is rosy. Dina Titus said 53.4 percent of the workforce in her district would get a raise — without any acknowledgement that some would lose their jobs or have hours cut. “Too many workers struggle to pay rent and put food on the table. One job should be enough to make ends meet in this country. It is disgraceful that Senate Republicans are working with Donald Trump to keep paychecks low for most workers while giving tax cuts to the rich,” she said.

Rep. Steven Horsford lamented, “One in 9 U.S. workers are paid wages that leave them in poverty, even when working full-time and year-round. That is unacceptable. While Republicans wrote their GOP tax plan to benefit the wealthy and well-connected, House Democrats are laser-focused on growing the pay-checks of the hard-working men and women who are the backbone of our nation.”

Both Horsford and Rep. Susie Lee claimed the wage hike would stimulate local economies, though the CBO analysis found the bill would reduce total real (inflation-adjusted) family income in 2025 by $9 billion, or 0.1 percent.

Though the Republican-controlled Senate is unlikely to pass this job and economy roiling atrocity, count on Democrats in 2020 to brag about trying to “help” the working class. 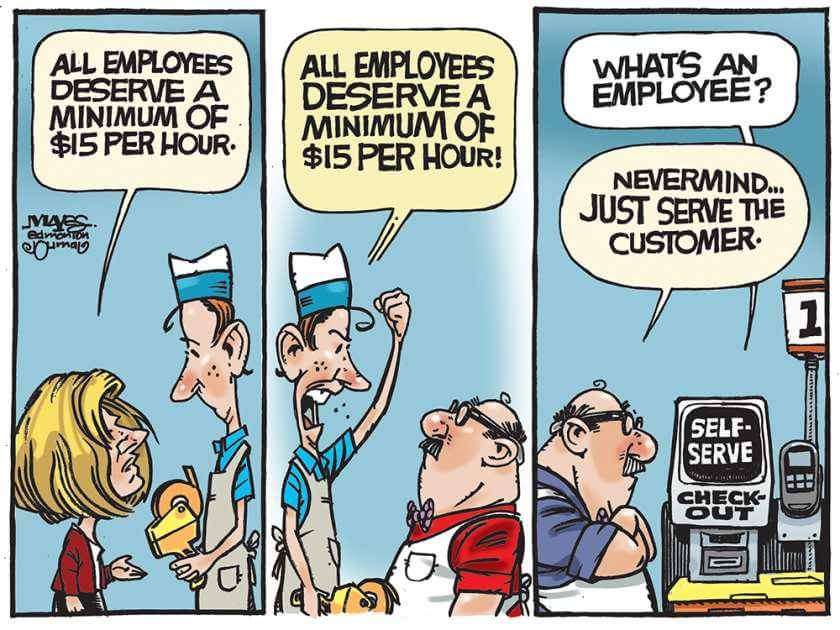