Despite all the evidence that it will do more harm than good, a bill to raise the minimum wage in Nevada is still wending its way through the halls of the Legislature in Carson City.

Assembly Bill 456 would raise the minimum wage 75 cents per hour each year as it climbs from the current $7.25 per hour for those receiving company health insurance and $8.25 for those not insured until it reaches $11 or $12 per hour.

In his State of the State speech, Democratic Gov. Steve Sisolak called for raising the minimum wage and declared, “It’s impossible for an individual, let alone a family, to live on $7.25 an hour,” ignoring the fact almost no one “lives” on minimum wage. Fewer than 3 percent of workers are paid the minimum wage and most of them are under age 25 and working part-time. Most are supplementing family income rather than being self-supporting.

In fact, raising the minimum wage often results in jobs being cut and/or working hours reduced. One study found the average low-wage worker in Seattle lost $125 a month because the minimum wage was raised to $15 an hour.

Now, a recent study released by the National Bureau of Economic Research found that raising the minimum wage can harm even those who are not being paid the minimum wage.

Using national crime data from 1998 to 2016, the study found “robust evidence that minimum wage hikes increase property crime arrests among teenagers and young adults ages 16- to-24, a population for whom minimum wages are likely to bind.”

“We conclude that increasing the minimum wage will at best be ineffective at deterring crime and at worst will have unintended consequences that increase property crime among young adults,” the study authors concluded. They said that previous studies that projected a decrease in crime due to raising the minimum wage ignored the possibility of hours being cut and jobs being lost.

The Congressional Budget Office in 2014 estimated that if the federal minimum wage were increased to $10.10 an hour — as proposed by President Obama and others — up to a million workers would lose their jobs.

According to the American Enterprise Institute, when the minimum wage rose 41 percent between 2007 and 2009, the jobless rate for 16- to 19-year-olds increased by 10 percentage points, from about 16 percent in 2007 to more than 26 percent in 2009 — even higher for minorities.

Without those entry level jobs younger Americans cannot build the skills needed to earn higher pay for a lifetime.

Still another Heritage study reported that every dollar increase in minimum wage really only raises take-home pay by 20 cents once welfare benefits are reduced and taxes are increased.

It’s the immutable law of unintended consequences. Lawmakers should abandon their support for this bill, which would cause more harm than good. 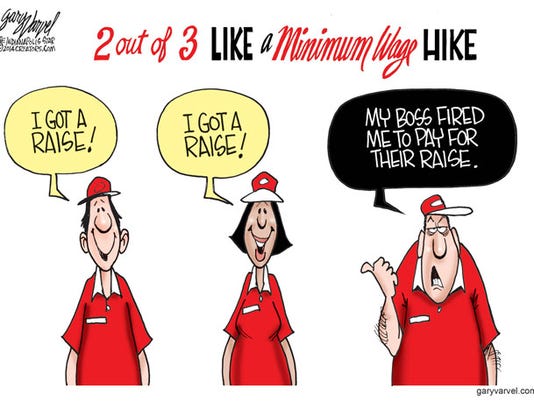