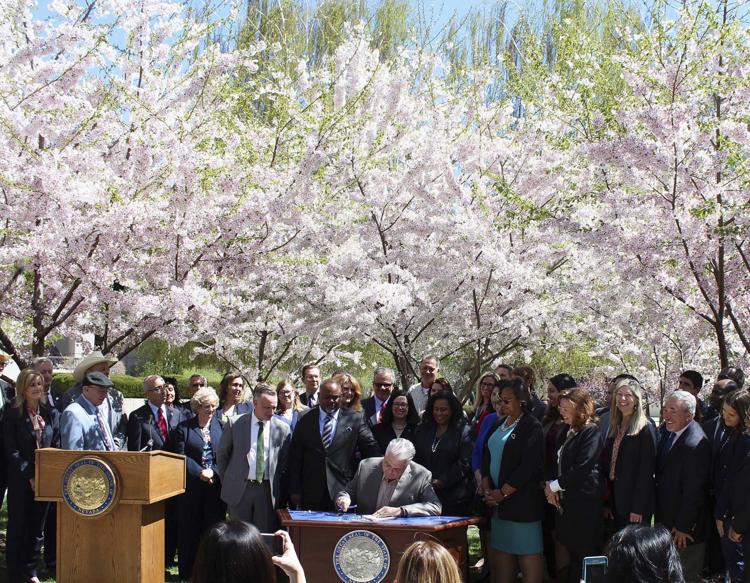 Gov. Steve Sisolak signs legislation requiring electricity companies to get half of their energy from renewable sources by 2030. (AP pix via Elko Daily Free Press)

Earth Day in Nevada, where never is heard a discouraging word.

On Monday Gov. Steve Sisolak signed a bill that will require 50 percent of Nevada’s electricity to be generated by renewable sources — such as wind, solar and geothermal — by 2030. The bill passed both the Senate and Assembly unanimously. The current renewable portfolio standard (RPS) is 25 percent by 2025.

No one deigned to mention and apparently no one bothered to ask just what this requirement will cost Nevada ratepayers. Clean air at any price, right?

As for cleaning the air, the study found that RPS programs did indeed reduce carbon emissions, but at a high cost.  The study found the cost to be more than $130 per metric ton of carbon-dioxide and as much as $460 per metric ton. “This is several times higher than conventional estimates of the benefits of reducing a metric ton, or the social cost of carbon (SCC),” the report said. “The Obama Administration’s central estimate of the SCC is roughly $50 per ton in today’s dollars.”

Did anyone bother to read a 2013 study by the Beacon Hill Institute at Suffolk University, which was commissioned by the Nevada Policy Research Institute?

Beacon Hill estimated the current RPS could cost Nevada between 590 and 3,070 jobs by 2025. This is because power bills would increase from somewhere around 2 percent to nearly 11 percent due to the RPS. While the residential power user’s bill might increase anywhere between $20 and $130 a year, an industrial ratepayer could expect power bills to increase from nearly $7,000 to more than $47,000 a year — that’s higher than the average salary in Nevada.

“One could justify the higher electricity costs if the environmental benefits — in terms of reduced greenhouse gases (GHGs) and other emissions — outweighed the costs,” Beacon Hill reported. “However, it is unclear that the use of renewable energy resources — especially wind and solar — significantly reduces GHG emissions. Due to their intermittency, wind and solar require significant conventional backup power sources that are cycled up and down to accommodate the variability in the production of wind and solar power. A 2010 study found that wind power actually increases pollution and greenhouse gas emissions.

“Thus, there appear to be few, if any, benefits to implementing RPS policies based on heavy uses of wind.”

The bottom line, according to the analysis, is higher power costs will make Nevada less competitive and drive away potential job creating businesses without doing anything whatsoever to reduce global emissions.

NV Energy produces the majority of power in Nevada and its president and CEO, Doug Cannon, was on hand at the bill signing to say, “We announced our support of the renewable standard increase in 2018 and are honored to have worked closely with Governor Sisolak, Senator Chris Brooks, who was instrumental in leading this effort; and other stakeholders to accomplish this so early in the legislative session.”