Unfortunately a Democratic proposal to allow state public employees to collectively bargain for wages and benefits, Senate Bill 135, survived this past week, passing out of a state Senate committee on a party-line vote, even after studies showed it will balloon the cost to Nevada taxpayers.

Since 1969 local government public workers have been allowed to unionize, but not state workers. As a result, according to an analysis of 2017 Census data by the Nevada Policy Research Institute (NPRI), local government workers here are paid 46 percent more than private-sector workers, the highest such wage gap in the nation. The nationwide gap is a mere 8 percent.

A study in 2014 by the American Enterprise Institute for Public Policy Research by Andrew Biggs and Jason Richwine found that even when education and experience differences between state public workers and private-sector workers are taken into account, state workers in Nevada still are paid 29 percent more than private workers. This ranked ninth highest in the nation and was nearly triple the 11 percent differential found nationwide.

Giving state public workers collective bargaining rights is likely to result in an even greater imbalance. In fact, a study commissioned by the Las Vegas Metro Chamber of Commerce estimates the unionization could in two decades cost as much as $596 per Nevada resident a year, measured in inflation-adjusted 2012 dollars. This would amount to as much as $1.75 billion a year. The entire current general fund budget amounts to about $4 billion a year.

In a statement accompanying the collective bargaining cost study, Hugh Anderson, chairman of the chamber’s Government Affairs Committee, argued, “This report shows that allowing collective bargaining for state employees would add significant new ongoing annual costs to the state budget and would likely take resources away from other important priorities including education, human services, public safety, infrastructure, and health care.”

Nevada Democrats have identified SB135 as a priority this session and Democratic Gov. Steve Sisolak said during his State of the State speech that state workers “should be empowered to bargain collectively in the years ahead.” A similar measure in 2017, facing a Republican-majority Legislature and Republican governor, went nowhere.

Unionization of public workers results in higher costs because taxpayers are largely shut out of the negotiations and only get to see the end result. The unions contribute to elected officials who support their demands, providing an incentive for elected officials to comply with those demands and get re-elected. Further, under Nevada’s collective bargaining law, if negotiations come to an impasse, an arbitrator is appointed to settle the dispute and the primary criteria for granting a union’s demands is whether the government entity has the ability to pay what is demanded even if other spending must be curtailed. That determination is usually in favor of the union.

NPRI’s Robert Fellner, the group’s policy director, testified against SB135, saying, “Collective bargaining for public workers is unwarranted because the public sector lacks any of the imbalances that collective bargaining in the private sector was intended to fix. While private-sector employers could theoretically profit by underpaying their workers, the public sector has neither owners, nor profits, over which to negotiate. Elected officials making decisions regarding public workers’ compensation do not have to pay for these costs themselves.”

As we have noted in the past, none other than the icon of progressivism, Franklin D. Roosevelt, pointed out in a 1937 letter the problem with collective bargaining for public employees: “The very nature and purposes of Government make it impossible for administrative officials to represent fully or to bind the employer in mutual discussions with Government employee organizations. The employer is the whole people …”

The taxpayers need to inundate lawmakers in Carson City with demands that this grab for their hard-earned money be derailed. 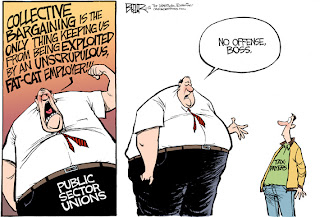