A bill being considered by lawmakers in Carson City would end the current practice by law enforcement of seizing property suspected of being used in a crime by using civil law, rather than criminal law, and keeping the proceeds of the seized property for themselves — pejoratively labeled policing for profit.

Assembly Bill 200 would require all seizures to be handled in a criminal case and require proof of a criminal conviction or plea agreement. Also the property or proceeds from its sale would go to education, not the police agency that seized it. 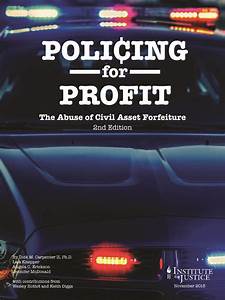 In the past, several Nevada law enforcement agencies have seized cash suspected of being drug profits without even charging anyone with a crime.

During testimony explaining AB200 it was noted that many defendants whose property is seized are indigent and have appointed public defenders who are not allowed to work on the separate civil asset forfeiture cases, meaning the defendant cannot afford to legally fight for return of the property.

The Institute for Justice in a 2015 report called “Policing for Profit” gave Nevada a D- grade for its handling of asset forfeitures. IJ said this grade was due to “weak protections for innocent owners and a strong financial incentive to seize.” For example, an innocent party might be the owner of a vehicle driven during a crime by a relative.

The incentive is that law enforcement agencies may retain up to 100 percent of forfeiture proceeds unless the value exceeds $100,000, then 70 percent must go to the local school district.

“This bill fixes that in two critical ways,” Honchariw testified. “First, it requires a conviction in all cases before forfeiture can apply. Second, it redirects the bulk of proceeds generated by forfeited property towards state education funding, rather than law enforcement, which effectively eliminates the ‘policing for profit’ incentive that currently exists.”

He also said those most likely to be affected by civil asset forfeitures are those who can’t afford to hire an attorney and fight for their property, meaning innocent victims have no practical recourse for getting their property back.

In fact, a deputy in Humboldt County once told a California tourist whose $50,000 in cash had been seized,  “You’ll burn it up in attorney fees before we give it back to you.”

We urge lawmakers to pass AB200 and Gov. Steve Sisolak to sign it.

4 comments on “Editorial: Bill would curb policing for profit”