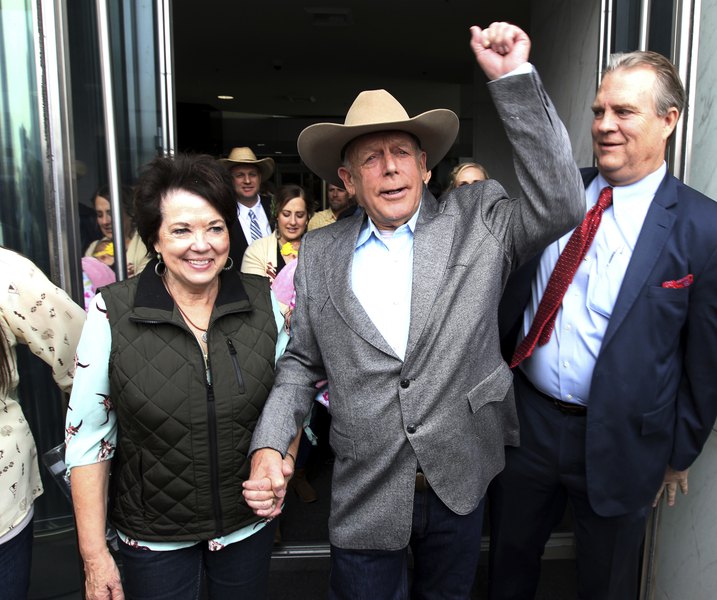 Cliven Bundy walks out of federal court with his wife Carol on Monday, Jan. 8, 2018, in Las Vegas, after a judge dismissed criminal charges against him and his sons accused of leading an armed uprising against federal authorities in 2014. (R-J pix by K.M Cannon

This past week prosecutors appealed to the 9th U.S. Circuit Court of Appeals the decision by a Nevada federal judge to dismiss with prejudice all charges against Bunkerville rancher Cliven Bundy, two of his sons and a self-style militiaman from Montana because the government failed to disclose potentially exculpatory evidence to the defense.

Knowing the track record of the liberal 9th Circuit, odds are the court will order the defendants back to face charges.

The Bundy family has grazed cattle on public land in Clark County since the 1880s, but 25 years ago the Bureau of Land Management told the family it could no longer graze cattle in the spring because they might harm the hatchlings of the threatened desert tortoise — a contention range biologists say is bogus. Since those months are the only ones in which cattle gain weight on the desert range, Bundy refused to comply and stopped paying the BLM its grazing fees.

In April 2014, saying Bundy owed more than $1 million in grazing fees and trespass fines, contract cowboys backed by heavily armed BLM and FBI agents started rounding up the Bundy cattle. In response, armed men from across the West gathered for a face-off with the federal agents.

To avert a potential bloodbath the agents backed down and left, but Bundy and others were later indicted on charges that included obstruction of justice, conspiracy, extortion, assault and impeding federal officers.

Two of three scheduled trials took place, but a year ago during the third trial of Cliven Bundy and his co-defendants Judge Gloria Navarro abruptly halted proceedings and ruled that the prosecutors had willfully and flagrantly failed to disclose evidence that could have been used by the defense, including information about an FBI surveillance camera, documents citing the presence of snipers, certain maps, FBI logs, threat assessments that showed the Bundys weren’t violent, documents reportedly showing that no threatened desert tortoises were ever found to be harmed by Bundy’s cattle, and internal affairs documents detailing possible misdeeds by the Bureau of Land Management agent in charge, who was later fired.

The judge ruled the dismissal was with prejudice, meaning charges could not be brought against them again.

Curiously, most of that information cited would have allowed the defense to argue the defendants were provoked and were acting in self-defense, arguments the judge previously ruled were impermissible. The appeal goes into excruciating detail about this seeming contradiction.

In response to the appeal, Bundy’s lawyer Larry Klayman asked the appellate court to dismiss the prosecution’s appeal because it had missed the filing deadline. Though the prosecution asked for deadlines extensions, the court has not yet granted such an extension.

According to press accounts, Klayman also called the appeal “unprofessional and grossly unethical,” adding, “They are apparently hopeful that this court, if an appeal is heard, will relieve them from the prospect that their careers at the Department of Justice are over, much more the potential for disbarment. Given the record, this ‘Hail Mary’ attempt to skate from their own liability is destined to fail.”

But the appeal, penned by Nevada Assistant U.S. Attorney Elizabeth White, argues,  “Any missteps were inadvertent (or at worst negligent), and those errors did not merit the court’s strong condemnation of the prosecution team.”

White also argued that court precedents show the appropriate remedy for failing to disclose would be either the dismissal of some charges or a new trial, not outright dismissal.

In arguing that disclosure of evidence might jeopardize the safety of witnesses and agents, the appeal dredged up a long-discredited base canard.

The brief stated, “Its goal was to produce all relevant information while protecting victims, witnesses, and law enforcement officers from harassment and threats, and from the violence that had already taken the lives of two police officers and a civilian at the hands of two of Bundy’s extremist followers.”

This refers to the fact that in June 2014, Jerad and Amanda Miller, killed two Las Vegas police officers and another man before being killed in a shootout with police.

What was not mentioned is that the Millers were a couple of leftist lunatics who showed up at the Bundy ranch standoff but were told by the Bundys to leave because of their “very radical” views. They were not Bundy’s “extremist followers.”

Despite this error, the appellate court is likely to look favorably on the prosecution’s appeal.

8 comments on “Newspaper column: Bundys may have to face trial after all”