The right to free speech includes the right to not be compelled to speak.

All of these have come down from a closely divided U.S. Supreme Court in a matter of days.

Today the court ruled that public employees could not to be forced to pay dues to unions with which they might not agree. Justice Samuel Alito writes in the 5-4 opinion:

The First Amendment, made applicable to the States by the Fourteenth Amendment, forbids abridgment of the freedom of speech. We have held time and again that freedom of speech “includes both the right to speak freely and the right to refrain from speaking at all.” … The right to eschew association for expressive purposes is likewise protected. … (“Freedom of association … plainly presupposes a free­dom not to associate”) … (“[F]orced associations that burden protected speech are impermissible”). As Justice Jackson memorably put it: “If there is any fixed star in our constitutional constella­tion, it is that no official, high or petty, can prescribe what shall be orthodox in politics, nationalism, religion, or other matters of opinion or force citizens to confess by word or act their faith therein.”

Just the day before the court ruled, again 5-4, that a California law that required pro-life, religious-oriented unlicensed pregnancy centers to place extensive disclaimers in large fonts and in as many as 13 languages in their ads and on billboards telling people about abortion services was an unconstitutional impingement on free speech. The ruling overturned a 9th U.S. Circuit Court of Appeals ruling.

Here, for example, licensed clinics must provide a government-drafted script about the availability of state-sponsored services, as well as contact information for how to obtain them. One of those services is abortion — the very practice that petitioners are devoted to opposing. By requiring petitioners to inform women how they can obtain state-subsidized abortions — at the same time petitioners try to dissuade women from choosing that option — the licensed notice plainly “alters the content” of petitioners’ speech.

A little more than a week ago in a 7-2 ruling the court held the Colorado Civil Rights Commission was inconsistent in its rulings relating to issues of the First Amendment’s guarantee of free exercise of religion and free speech.

Writing for the majority, Justice Anthony Kennedy noted that on at least three occasions the state Civil Rights Commission held that bakers who refused to create cakes with images that conveyed disapproval of same-sex marriage did so lawfully.

“The treatment of the conscience-based objections at issue in these three cases contrasts with the Commission’s treatment of Phillips’ objection,” Kennedy wrote. “The Commission ruled against (Masterpiece Cakeshop owner Jack) Phillips in part on the theory that any message the requested wedding cake would carry would be attributed to the customer, not to the baker. Yet the Division did not address this point in any of the other cases with respect to the cakes depicting anti-gay marriage symbolism.”
Shortly thereafter the court remanded a Washington case involving a florist who declined to arrange flowers for a gay wedding, citing the Colorado ruling.
The state of Nevada, under the direction of Attorney Adam Laxalt, had joined in both the public employee union case and the California abortion law case on the winning side.
Laxalt’s office put out a press release about the California law ruling stating: “The ruling, which rests exclusively on free speech grounds, does not affect abortion providers; it neither requires them to change their practices nor infringes on their ability to provide abortions. The Supreme Court correctly held that compelling private organizations to promote the government’s preferred message under those circumstances is inconsistent with the First Amendment. This is an important holding ensuring that the government cannot simply force private speakers with whom it disagrees to also promote the government’s preferred message, especially when there are other ways for the government to promote its own message without interfering with private speech.”

Republican Laxalt’s Democratic opponent for governor in November, Steve Sisolak, put out a statement reported by The Nevada Independent saying, “I believe that women deserve access to all of their options when it comes to their reproductive health care. I still have concerns over the lack of information given by these crisis pregnancy centers and the harm it can cause.”Sisolak continued, “As governor, I will fight to protect a woman’s constitutional reproductive rights and her consistent access to comprehensive care. Adam Laxalt has shown repeatedly that he will pursue an anti-choice agenda that will roll back the clock on women’s rights and bring Nevada down a dangerous path.”

This has nothing to do with abortion rights and only to do with speech rights.

This point was lost on Democratic Rep. Jacky Rosen who is running for Republican Dean Heller’s Senate seat. She sent out an email saying, “Deceiving women about their health care options is an attack on women’s fundamental reproductive freedom, and I will continue to stand against this Administration’s attacks on women’s rights and access to health care. Nevadans support a woman’s right to make these personal decisions.”

Lame-duck Democratic Rep. Ruben Kihuen sent an email saying, “It is disappointing that today’s Supreme Court decision will allow unlicensed facilities to continue misleading women about the health care services they provide. No woman seeking accurate information about her health care options should be lied to, shamed, or denied access to basic medical care. This ruling is a huge setback in our nation’s fight to protect and advance women’s rights and will make it harder for women to access the health care services they need. We must continue fighting to ensure that every woman has the right to make her own health choices and has access to the full range of options.”

Laxalt’s political campaign sent out an email crowing about the two most recent court ruling and rubbing Sisolak’s nose in it:

The Supreme Court has reaffirmed that the government cannot force Nevadans to advocate political positions against their beliefs. We know Steve Sisolak disagrees. Steve said it was “shameful” when Adam visited a Nevada pregnancy care center, and he favors zero restrictions on abortion — a position to the left of most Nevada Democrats. He is benefiting from the government union in this case, AFSCME, that is running over a million dollars in attack ads against Adam right now — attack ads that PolitiFact has called “false.”

These were great victories for free speech. Adam protected pregnancy care centers from a radical California law that would have forced these pro-life centers that offer care for pregnant women to advocate for policies they disagree with. Adam protected workers from being forced to give up their wages to a government union that pays for political lobbying and advertising that they may disagree with. 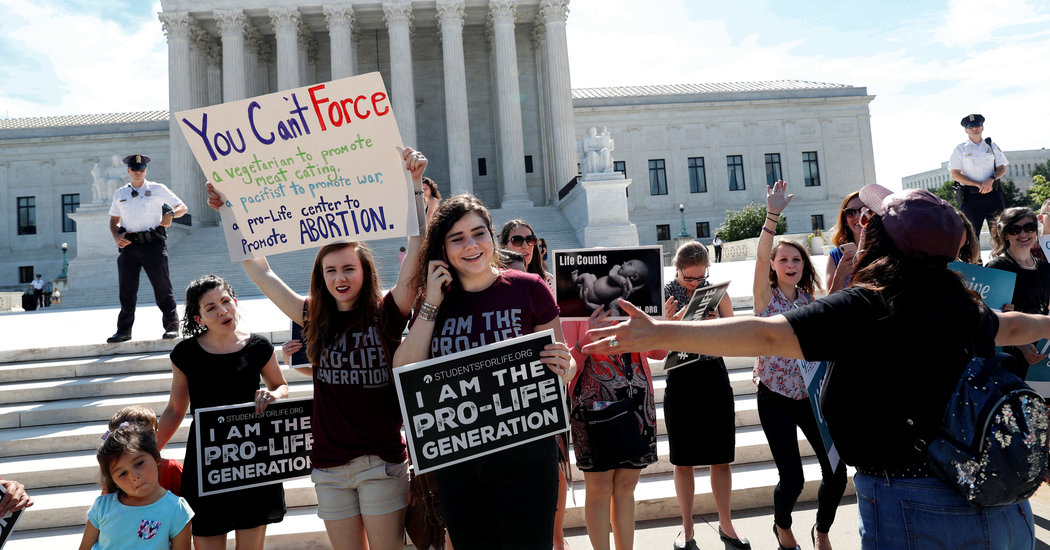 Anti-abortion activists celebrated outside the Supreme Court on Tuesday. (Reuters pix via NYTimes)

9 comments on “Free speech includes the right to be silent”