The Trump administration has settled a lawsuit filed by Nevada and 19 other states over Obama administration rules that sweepingly redefined what constituted critical habitat for endangered species and has agreed to rewrite those rules.

The suit, filed in November 2016 against various federal land agencies, accused the federal bureaucrats of essentially rewriting the Endangered Species Act of 1973 (ESA) to give themselves potential veto power over any use whatsoever on every square foot of rural land, public or private, in the country.

Though the ESA gives the U.S. Fish and Wildlife Service authority to protect “critical habitat” occupied by endangered or threatened species, the rewritten rules redefined “critical habitat” to include land currently unoccupied by those species but just might someday, in someway, somehow — as a result of global warming or a meteor strike, perhaps — later become “critical habitat.”

The settlement, reached this past week, requires the federal land agencies to submit revised rules for public review within 60 days. The states reserve the right to file another lawsuit if the new rules are unsatisfactory.

“I commend the federal government for agreeing to reconsider rules created in the previous administration that could have severely restricted property owners’ use of their own land,” said Nevada Attorney General Adam Laxalt, who joined the suit, which was filed in Alabama. “If this federal land grab had been implemented, the federal government could have expanded critical habitat designations to include entire states. I am proud of the result of our joint efforts to protect Nevada land from burdensome and unconstitutional federal overreach.” (Critical habitat)

That overreach flew in the face of the ESA’s requirement that “critical habitat shall not include the entire geographical area which can be occupied by the threatened or endangered species,” except in a circumstance determined by the secretary of the Interior.

Opponents of the rules said they impermissibly relied on hope and base speculation.

The lawsuit also said the rules create huge costs for private landowners and small businesses who must go to the expense of obtaining federal permits in order to make even minor modifications to their own property. Permits could be denied under rules that were obviously arbitrary, capricious and onerous.

Arkansas Attorney General Leslie Rutledge commented on the settlement and said, “Our wildlife must be protected for future generations, but it is completely unreasonable to give the federal government broad authority to restrict land usage just because bureaucrats in D.C. think an animal might, possibly, one day inhabit that land — even if that land does not have features necessary for its survival. These rules are a clear example of an Obama-era overreach that must be changed to protect the rights of land owners and the States.”

“These rules even allowed the federal government to prevent activities it decided could adversely affect habitat features that do not actually exist,” Marshall said. “For example, as the States noted in their complaint, the federal government ‘could declare desert as critical habitat for fish and then prevent the construction of a highway through desert lands, under the theory that it would prevent the future formation of a stream that might one day support the species.’”

Of course, the self-styled environmentalists don’t want any changes. An attorney for the Center for Biological Diversity told E&E News in an email, “We’ll be taking a close look at the revised rules and are likely to challenge them if we identify any departure from the Endangered Species Act’s requirement that the agencies protect habitats essential for species recovery.”

Over the 45 years since the passage of the Endangered Species Act the return on investment has been practically nil. Only 1 percent of listed species have ever recovered sufficiently to be delisted, despite the law’s huge impact on economic endeavors. Hopefully, the rewritten rules will lessen the impact. 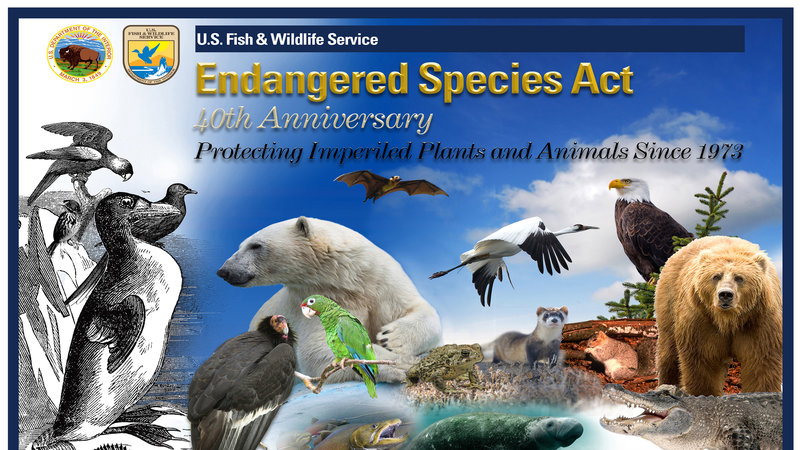