A number of media outlets have been all aflutter over the increase in Democratic turnout in Tuesday’s primaries in Texas, using it to suggest a Democrat resurgence in the fall.

Newsweek, for example, led with the fact Democrat vote turnout was up “a massive 87 percent” compared to 2014.

It reminded me of growing up in a Texas during a time when everyone knew that if you wanted your vote to count you had to vote in the Democratic primary, because that was where all the races were decided. Of course, it is different now. In Texas one does not declare a political affiliation at the time of registration, but chooses on Election Day. According to Pew Research Center, 39 percent of Texans describe themselves as Republicans or leaning Republican, compared 40 percent who chose the Democrat label.

Near the end of the Newsweek account it did mention that 500,000 more Republicans voted than Democrats, without noting that the GOP vote was 50 percent higher — 1.5 million Republican votes compared to 1 million Democrat votes.

Nor did the magazine make note of the fact that in 2014 the Democratic primary turnout was a paltry 4.12 percent of all registered voters compared to 9.98 percent for Republicans. So doubling the turnout doesn’t mean much. 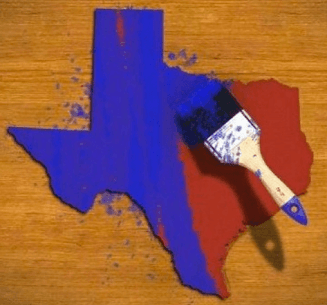 4 comments on “About that blue wave out of Texas”