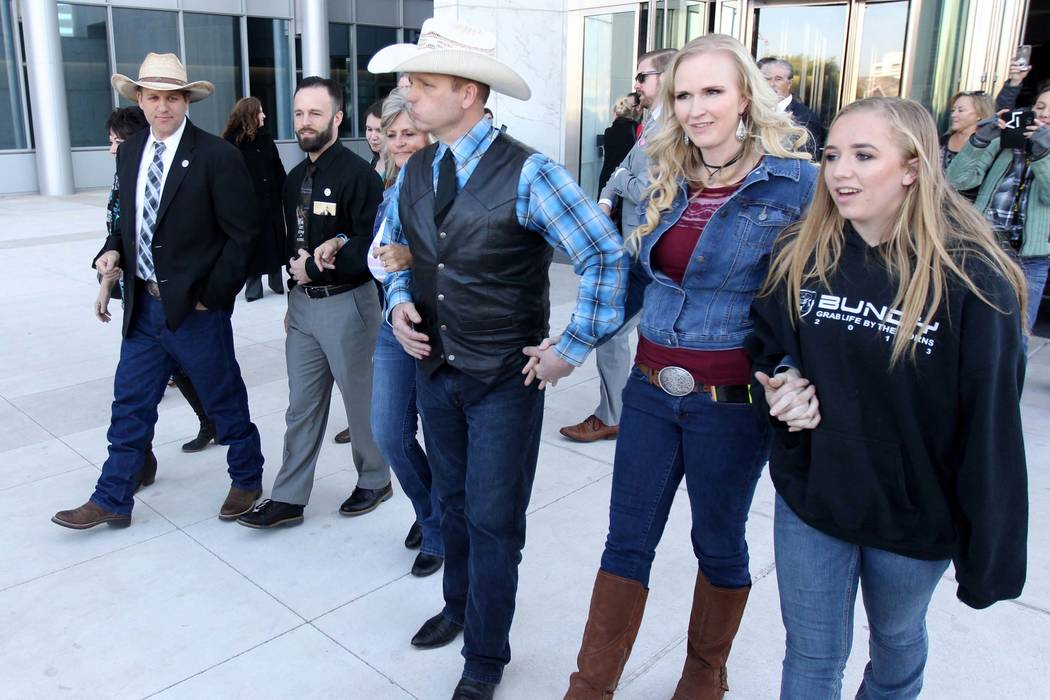 Though the most recent trial of four defendants in the April 2014 standoff between armed protesters and Bureau of Land Management agents trying to confiscate Cliven Bundy’s cattle ended in a mistrial, the case will stand as an historic example of how sweeping secrecy can cast doubt on whether justice is being served.

This past week U.S. District Judge Gloria Navarro halted testimony in the trial and sent the jurors home while she heard arguments behind closed doors over whether the prosecution had failed to provide the defense with potentially exculpatory evidence quickly enough. The judge said the prosecution’s repeated failure to timely disclose information was “sufficient to undermine the confidence in the outcome of the trial,” which she said could result in a mistrial. This week she declared a mistrial.

Attorney Maggie McLetchie — representing the Las Vegas Review-Journal newspaper and Battle Born Media, which publishes weekly newspapers in Mesquite, Ely, Eureka, Sparks and Lincoln and Mineral counties — promptly filed a motion seeking to intervene, which was granted. The newspapers are asking that all documents previously filed under seal be unsealed and that future hearings be conducted in open court.

In July 2016, despite objections from the newspapers, the judge granted the government’s request for a protective order that required nearly every piece of paper to be filed under seal due to some vague suspicions that witnesses and law enforcement officers might be subjected to threats or intimidation.

Though the case involves the April 2014 effort by the BLM to impound 500 head of Bundy’s cattle for failure to pay $1 million in grazing fees over two decades for his Bunkerville ranch, arrests of the original 19 defendants were not made until early 2016. Most remained jailed until recently on charges that include conspiracy, extortion, carrying a firearm during a crime of violence, threatening an officer and obstruction of justice.

The BLM released the cattle rather than risk a shootout.

The complex case, which includes an estimated 1.4 terabytes of electronic evidence, was broken into three trials. The first ended in a mistrial. At retrial two were acquitted and two pleaded to misdemeanors and were released on time served.

The just ended trial was the second and a third is scheduled for 30 days after this one ends, whenever that might be.

In arguing as to why the veil of secrecy should be lifted, McLetchie states that one of the most critical aspects of news reporting is to inform the public as to whether justice is being carried out, quoting a classic Supreme Court aphorism: “In short, justice must not only be done, it must be seen to be done.”

McLetchie goes on to say, “This shroud of secrecy is anathema to the presumption under the First Amendment and the common law that all documents filed with a court are presumptively public documents open for review and inspection. Moreover, closing hearings and filing documents under seal has prevented Intervenors from carrying out their constitutionally protected function of reporting the news. This is troublesome given the importance of this case, and the public’s right to know about the government’s handling of its investigation and prosecution …”

One of the documents apparently filed under seal — meaning the defendants can’t even discuss it — is an 18-page Nov. 27 memo from a BLM investigator to a Justice Department attorney alleging “a widespread pattern of bad judgment, lack of discipline, incredible bias, unprofessionalism and misconduct, as well as likely policy, ethical, and legal violations” by BLM staffers involved in the Bundy case.

The memo was leaked to numerous newspapers. It is a rambling, often redundant, typo-filled diatribe against the agent’s supervisors and prosecutors.

The agent said he was dismissed from reviewing the Bundy case in February and his files confiscated. “Futhermore,” he wrote, “when I did report the misconduct, ethical, professional, and legal issues, I also became a victim of whistleblower retaliation.” He wrote that he “feels” the prosecutor’s judgment is “likely clouded by extreme personal and religious bias and a desire to win the case at all costs. I feel he is likely willing to ignore and fail to report exculpatory material, extreme bias and act unethically and possibly deceptively to win.”

Though it may well be a self-serving effort on the part of a BLM staff member scorned, this is the very thing the public should be allowed to evaluate.

McLetchie notes the tradition of openness “serves as a check on the judiciary because the public can ensure that judges are not merely serving as a rubber stamp” for law enforcement.