Today the judge in the latest Bunkerville standoff trial declared yet another mistrial, according to a Gannett news account. The first trial earlier this year ended in a mistrial. She has tentatively set a new trial for February, nearly four years after the standoff between armed protesters and BLM agents attempting impound Cliven Bundy’s cattle for failure to pay grazing fees for two decades.

Bundy and sons Ryan and Ammon, as well as self-styled militia member Ryan Payne, were being tried in federal court in Las Vegas for charges stemming from that April 2014 armed standoff. Charges include obstruction of justice, conspiracy, extortion, assault and impeding federal officers. The agents released the cattle rather than risk a shootout. A third trial, including two other Bundy sons, is scheduled for after this trail ends, if it ever does.

As grounds for the mistrial, Judge Gloria Navarro cited five instances in which prosecutors failed to disclose to the defense certain evidence in a timely manner. This included records about surveillance and snipers at the Bundy Ranch, FBI logs, threat assessments about the Bundys and internal affairs reports about BLM agents. Navarro said that evidence could have been useful to the defense and altered the trial outcome.

The judge has scheduled a hearing for January. 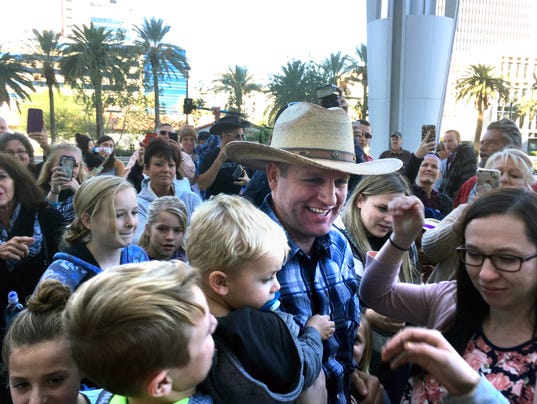 10 comments on “Another mistrial declared in Bunkerville standoff case”