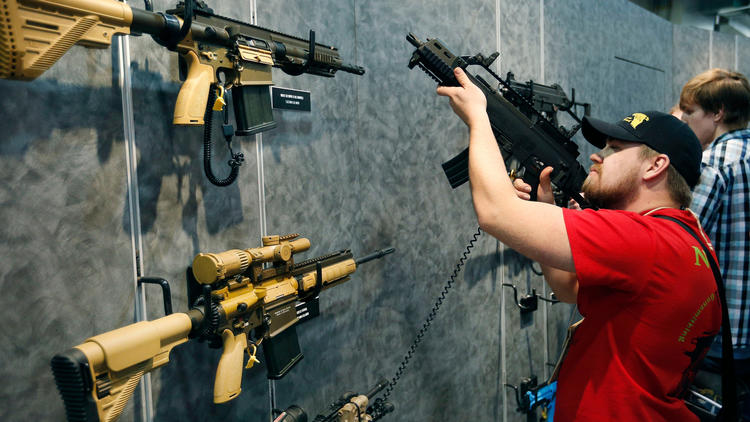 Spend enough money, crunch enough data — you can “prove” anything.

If research shows it, it must prove something nefarious about the difference between state gun laws in California and those in Nevada, right?

“Our study suggests that California’s strict regulations — on firearms, generally, and on gun shows, specifically — may be effective in preventing short-term increases in firearm deaths and injuries following gun shows,” a news account quotes the study’s lead author, Ellicott Matthay, a Ph.D. student, as saying.

The study was funded in part by more than $2 million in federal funds from the National Institutes of Health.

The news account detailed the findings, “Compared to the two weeks before the gun shows occurred, post-show firearm injury rates remained stable in regions near California gun shows. But post-show firearm injury rates increased from 0.67 per 100,000 people to 1.14 per 100,000 in regions near Nevada shows. This 70 percent increase translates to 30 more firearms deaths or injuries in California near the state line after 161 Nevada gun shows.”

There is no mention of whether or not anyone bothered to ask whether any of the guns used in said deaths and injuries had any link to any gun show anywhere ever. It was noted that the California areas “near” Nevada gun shows are largely rural.

Presumably gun shows in California are largely in urban areas surrounded by typical urban rates of violence less susceptible to spikes than rural areas. If you have 100 incidents in a two-week period, followed by 110 incidents in the next two weeks there is no “spike.” But if you have two incidents in two weeks in a rural area and four in the following weeks, that’s a “spike.”

Nor was there any mention of whether there was a spike in gun violence during a new moon as opposed to a full moon.

It is also unclear which gun show intervals were chosen since there are usually at least two gun shows a month in Nevada, meaning the study intervals are likely to overlap.

The news account also duly noted that all firearms sales in California require a background check, including private sales, such as those at gun shows, while Nevada does not. Nevada voters narrowly approved a law requiring background checks prior to private sales, but the law was written in such a way as to make it unenforceable.

“The study suggests that travel to less-restrictive states may threaten the effectiveness of firearm laws within California,” Matthay was quoted as saying. “When a less-restrictive is next to a state that is more restrictive, there may be spillover effects. More research is needed to know for certain.”

The news account neglected to mention that federal law prohibits an unlicensed seller transferring a firearm to an individual who does not reside in the same state.

“Generally, for a person to lawfully transfer a firearm to an unlicensed person who resides out of State, the firearm must be shipped to a Federal Firearms Licensee (FFL) within the recipient’s State of residence. He or she may then receive the firearm from the FFL upon completion of an ATF Form 4473 and a NICS [National Instant Criminal Background Check System] background check,” according to an Alcohol, Tobacco and Firearms website, which answers frequently asked questions.

The Washington Free Beacon quotes John Lott, president of the Crime Prevention Research Center and author of “More Guns, Less Crime,” as being critical of the Berkeley study’s conclusions and methodology.

Lott pointed out that the better metric is to look at what happens in states after they change their gun background check laws. He said his research found a 2 percent increase in firearm murders after laws requiring background checks on private transfers were enacted.

Cause and effect? Coincidence?