Frankly, Interior Secretary Ryan Zinke’s memo to President Trump recommending modifications to a few national monuments — including the 300,000-acre Gold Butte National Monument in Clark County — is far too modest, but it has the Democratic contingent of Nevada’s Washington delegation squealing like a pig stuck under a gate.

Zinke recommended unspecified changes to the Gold Butte boundaries but totally ignored the massive 700,000-acre Basin and Range National Monument that straddles the border between Nye and Lincoln counties, even though members of the Congressional Western Caucus recommended reducing it to 2,500 acres — “the smallest area compatible,” as the law says, to protect the Indian petroglyphs there.

The Interior Secretary noted in his memo that the Antiquities Act of 1906 gave the president authority to protect historic and prehistoric landmarks and objects of scientific and historic interest, but the monument designation has instead been used to block use of vast landscapes. “It appears that certain monuments were designated to prevent economic activity such as grazing, mining, and timber production rather than to protect specific objects,” the memo observes. 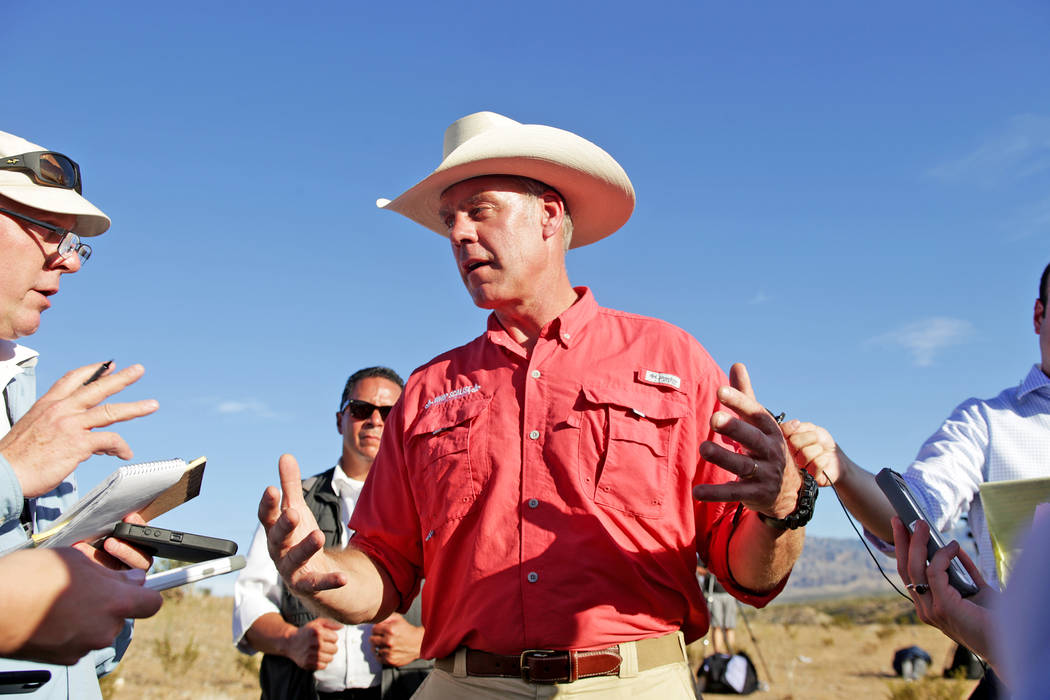 He also noted that the public comment process has been usurped by well-organized, well-funded, self-styled environmental groups, drowning out local officials, ranchers, miners and loggers.

These environmental groups and their Democratic cohorts are dead set on protecting every inch of barren dirt and rock from the invasive non-native species known as mankind.

Not that any of them has ever worked as a roughneck or roustabout in the grease orchards, castrated a calf or branded a steer, driven a Euclid filled with ore or operated a jackhammer or a chainsaw or cashed a pay check for doing so.

Democrat Rep. Ruben Kihuen of North Las Vegas, whose district includes Gold Butte, screeched about Zinke’s modest memo, “This decision will not only be detrimental to Nevada’s economy and shared cultural heritage, but it is further proof that the monument review process has been rigged from the start. Secretary Zinke promised that Nevadans’ voices would be heard. Instead, we got half-hearted attempts to meet with stakeholders and secret memos cooked up behind closed doors, all when the outcome was predetermined from the beginning. When it comes to altering our monuments and impacting our livelihood, Nevadans deserve more than unofficial leaks and uncorroborated reports. Secretary Zinke should look Nevadans in the eye and give it to us straight, rather than hide behind the administration’s continued shroud of secrecy.”

Actually, his constituents in Mesquite welcome the reduction, especially if it assures the town it will have access to springs in the region that will be needed to supply the growing community with drinking water in the future.

Zinke’s memo specifically noted that the water district has historic water rights to six springs and five of those are within the Obama-designated national monument boundaries. The memo further said that there are four active grazing allotments in the area, though the proclamation claimed there were none.

Democrat Rep. Dina Titus of Las Vegas weighed in by declaring, “Gold Butte’s opponents have created a straw man argument about water rights without mentioning that the monument’s proclamation includes language to protect them. Now we must recommit our effort to protect these precious public lands in the courts and send a strong message to Zinke and Trump to keep their hands off our monuments.”

Democrat Rep. Jacky Rosen of Henderson claimed, “This rash decision by the Trump Administration will not only endanger Nevada’s natural beauty and chip away at our cultural heritage, but it will also hurt our state’s outdoor recreation economy by eliminating jobs that have contributed significantly to our local tourism industry.”

Republican Sen. Dean Heller and Rep. Mark Amodei both opposed the designations of Gold Butte and Basin and Range.

Heller said, “As a strong proponent of states’ rights, the Obama Administration’s decision to bypass Congress and designate two national monuments in Nevada despite widespread disagreement at the local level is an example of extreme overreach and the failed Washington-knows-best mentality. That is why I welcomed Secretary Zinke to Nevada to see first-hand the impact of monuments designated under the Antiquities Act with no local input.”

The monument designation does nothing to add actual protection for the few petroglyphs and other artifacts that are located on the sites, but Zinke did recommend the president seek funding to actually protect those artifacts.