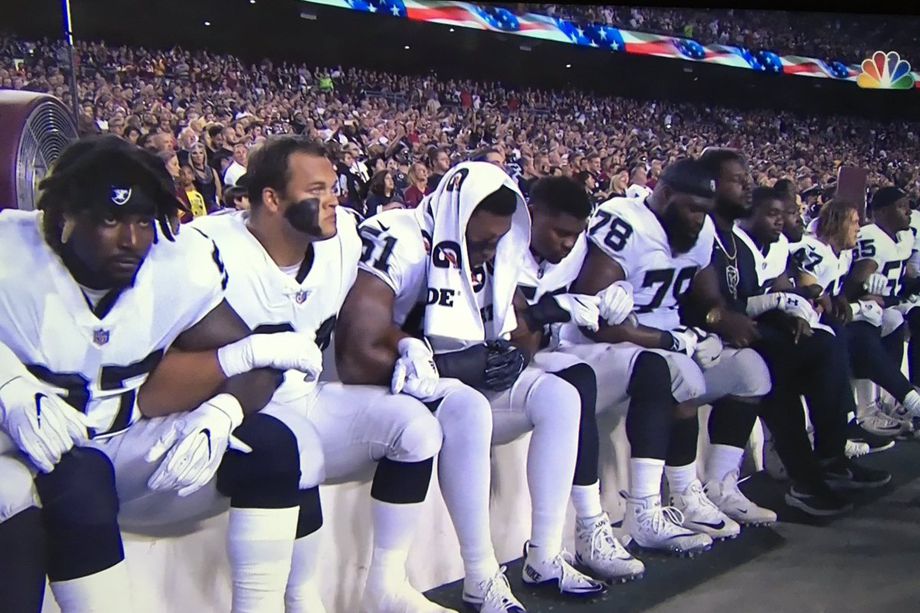 Before you poke someone in the eye, you should take your hand out of his pocket.

Michelle Malkin’s column posted at Townhall points out that those NFL players kneeling during the national anthem are doing so on turf paid for by taxpayers, not just ticket holders.

“Over the past decade, new tax-supported NFL stadiums rose up for the Indianapolis Colts (the $720 million Lucas Oil Stadium), the Dallas Cowboys (the $1.15 billion AT&T Stadium) the New York Jets and Giants (the $1.6 billion MetLife Stadium, the Minnesota Vikings (the $1.1 billion U.S. Bank Stadium), the Atlanta Falcons (the $1.5 billion Mercedes-Benz Stadium), and the San Francisco 49ers (the $1.3 billion Levi’s Stadium in Santa Clara),” Malkin notes.

She also reports that there soon will be a $2.6 billion stadium for the Los Angeles Chargers and Rams, as well as a $1.9 billion stadium for the Oakland Raiders when they move to Las Vegas. Though she neglects to point out that $750 million of that Raider stadium will be covered by room taxes, she does note that there is an $83 million taxpayer debt on two-decade-old renovations to the Alameda County Coliseum that the Raiders are abandoning.

So team players and owners are sticking it to taxpayers figuratively and literally.

If you just can’t wait till Thursday’s newspaper for Wayne Allyn Root’s predictable pro-Trump screed on this topic, it is already posted at Townhall. He argues that the NFL is committing economic suicide.

“It’s time for a nationwide boycott,” Root cheer leads. “It’s time for 63 million Trump fans to stop watching. Turn off NFL games on your TV for the next month. Watch the owners cry. Watch them panic. Watch them beg. Watch them order an end to all kneeling or disrespect for the national anthem. Watch them sing a whole new tune.”

He, too, gets around the taxpayer aspect and suggests that people call their governors and demand an end to all subsidies for the NFL.

Brent Bozell, also posted at Townhall, points out the liberal media jumped all over Trump’s tweets about the anthem kneeling equating them to racism and censorship, spurring “cowardly NFL teams” up the ante on Sunday with bigger displays of disrespect.

“The liberal media are shameless hypocrites when they polarize the country and then complain the country is polarized,” Bozell writes. “They have honored (Colin) Kaepernick as some kind of ‘star-spangled’ patriot and pushed his radical racial agenda. They have pressured the NFL and every other televised sports league to take liberal stands on everything from race to gun control to imposing transgender bathrooms.”

He noted how Gov. Brian Sandoval boasted that the Raider stadium would be a boon to the state’s economy. There were projections that the stadium would produce almost 6,000 annual jobs, total wages of $230 million and an increase of 1 million visitors annually.

“By putting taxpayers on the hook for a significant portion of the stadium’s cost, Raiders’ owner Mark Davis reduced his risk and directly benefits from a $750 million subsidy.  That makes sense for him. It never made financial sense for you,” Joecks writes. “The NFL protests are just another reminder of why government shouldn’t pick winners and losers in the economy.”

9 comments on “Time to end those NFL tax subsidies?”