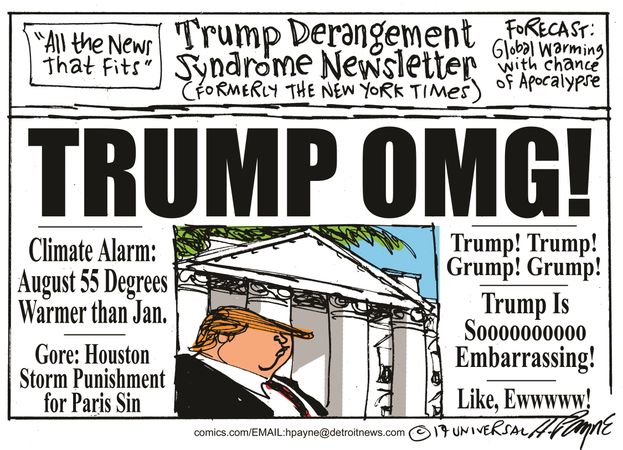 The Washington Post already has a story about how many votes the Houston hurricane will cost Trump, and CNN quotes a critic as saying his visit there is too soon, though they could as easily have found a critic to say he was too late.

Trump was blasted for being too late to criticize white nationalist in Charlottesville and for criticizing leftist ruffians at all.

He has been challenged for being too bellicose about North Korea or not enough.

It’s enough to drive a man insane, if he were not already. Talk about tilting at windmills.

“Recollect, Sancho,” said Don Quixote, “that wherever virtue exists in an eminent degree it is persecuted. Few or none of the famous men that have lived escaped being calumniated by malice. Julius Caesar, the boldest, wisest, and bravest of captains, was charged with being ambitious, and not particularly cleanly in his dress, or pure in his morals. Of Alexander, whose deeds won him the name of Great, they say that he was somewhat of a drunkard. Of Hercules, him of the many labours, it is said that he was lewd and luxurious. Of Don Galaor, the brother of Amadis of Gaul, it was whispered that he was over-quarrelsome, and of his brother that he was lachrymose. So that, O Sancho, amongst all these calumnies against good men, mine may be let pass, since they are no more than thou hast said.” — Cervantes, “Don Quixote“

16 comments on “Efforts by Trump to win over the press would be quixotic, if he were to even try”