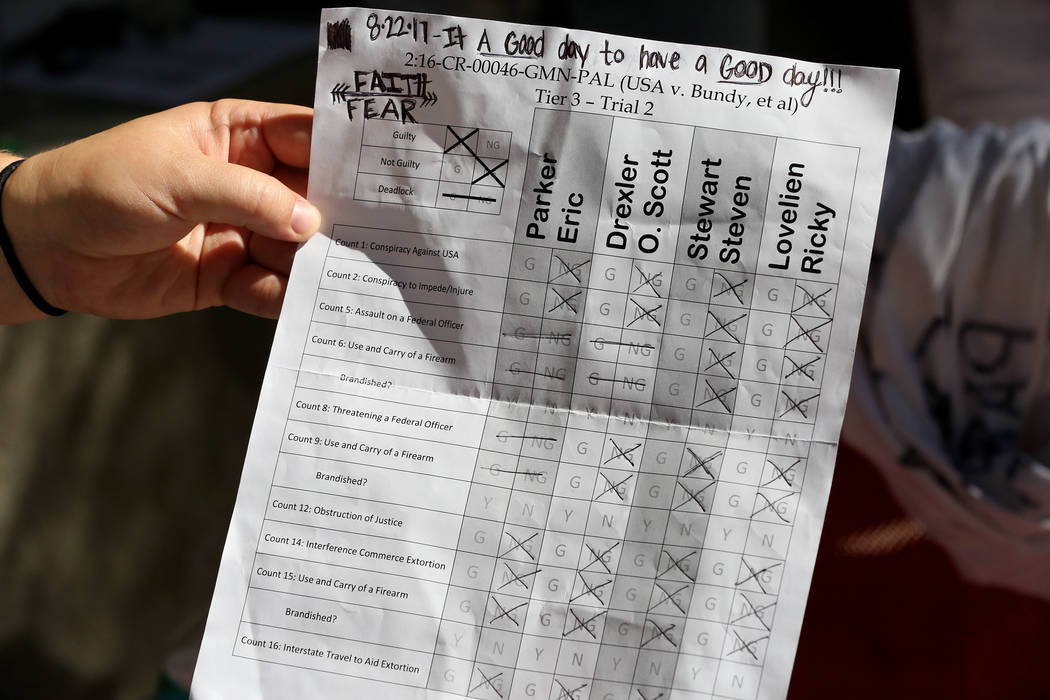 After having the defense stripped of the ability to argue about constitutional rights or to even mention possible excess force on the part of federal agents, the jurors in the Bunkerville standoff retrial still voted 11-1 Tuesday to acquit on all counts, defense attorneys told the morning newspaper after questioning those jurors.

Two defendants acquitted on all charges were freed immediately after a year and half in jail, but prosecutors are to decide today about whether to retry for a third time two men for which a single juror held out for conviction on a couple of lesser charges.

In April, the first of three scheduled trials for the 17 Bunkerville defendants — charged with obstruction of justice, conspiracy, extortion, assault and impeding federal officers — ended in a mistrial. The jury found only two of six people on trial guilty of some charges but deadlocked on the others. One of those has been sentenced to 68 years in prison.

What is the difference between walking free and 68 years in prison? The man sentenced to prison made the mistake of saying, “I was hell bent on killing federal agents that had turned their back on we the people,” to an undercover FBI agent who posed as a documentary filmmaker in order to interview him. What you say can and will be used against you.

The standoff occurred after heavily armed Bureau of Land Management agents attempted to confiscate Bundy’s cattle after he had refused for 20 years to pay grazing fees. Faced with armed protesters the agents eventually released the cattle.

Two more trials are pending, with Cliven Bundy and his four sons scheduled to be the last.

The judge in this retrial decided to bar the jurors from hearing certain so-called state of mind arguments — arguments that the defendants felt justified to show up and protest because of “perceived government misconduct” due to excessive use of force by law enforcement and that they were simply exercising their First and Second Amendment rights. She did not want them to engage in jury nullification.

The judge said the reasons the defendants went to Bunkerville were not relevant to the charges, but she allowed prosecutors to introduce testimony about the four men’s associations with militia groups.

4 comments on “What now in Bunkerville standoff case?”