In 1983, while working as the city editor of the Shreveport Journal, I penned a soft feature tied to the 35th anniversary of the original publication of George Orwell’s classic dystopian novel “Nineteen Eighty-Four.”

I observed in that piece that Orwell’s book was about a totalitarian dystopia in which BIG BROTHER WAS WATCHING YOU, suggesting this was like the infrared camera equipped drones or huge network of cybersnooping computers, long before the NSA revelations. 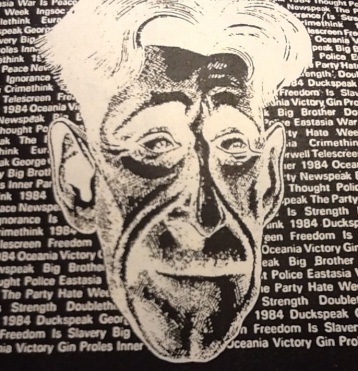 The book made the terms “Newspeak” and “doublethink” a part of the political lexicon — long before Fort Hood was merely workplace violence. Name your own examples.

“George Orwell respected language and railed against its abuse,” I wrote in 1983. “He was particularly offended by the propaganda — some of which he helped to write for the BBC in World War II. He saw firsthand the way the press was tricked and subverted for political purposes in the Spanish Civil War. Battles that never happened. Heroes who became traitors.”

In another piece posted here in 2013, I asked whether Orwell was a satirist or a prophet.

Walter Cronkite in a foreword to the 1983 paperback edition of “Nineteen Eighty-Four,” have claimed the book has failed as prophecy only because it has served so well as a warning — a warning against manipulation and power grabbing and the loss of privacy in the name of state security.

Orwell himself called his book a satire and took pains to correct those who saw it merely as a denunciation of socialism.

In a letter written shortly after the publication of the book, Orwell wrote, “My novel ‘Nineteen Eighty-four’ is not intended as an attack on socialism, or on the British Labour party, but as a show-up of the perversions to which a centralized economy is liable, and which have already been partly realized in Communism and fascism.

“I do not believe that the kind of society I describe will arrive, but I believe (allowing, of course, for the fact that the book is a satire) that something resembling it could arrive. I believe also that totalitarian ideas have taken root in the minds of intellectuals everywhere, and I have tried to draw these ideas out to their logical consequences. The scene of the book is laid in Britain in order to emphasize that the English speaking races are not innately better than anyone else and that totalitarianism, if not fought against, could triumph anywhere.”

Here is an except that might have a hint about current events:

Sometimes he talked to her of the Records Department and the impudent
forgeries that he committed there. Such things did not appear to horrify
her. She did not feel the abyss opening beneath her feet at the thought
of lies becoming truths. He told her the story of Jones, Aaronson, and
Rutherford and the momentous slip of paper which he had once held between
his fingers. It did not make much impression on her. At first, indeed, she
failed to grasp the point of the story.

‘Were they friends of yours?’ she said.

‘No, I never knew them. They were Inner Party members. Besides, they were
far older men than I was. They belonged to the old days, before the
Revolution. I barely knew them by sight.’

‘Then what was there to worry about? People are being killed off all the
time, aren’t they?’

He tried to make her understand. ‘This was an exceptional case. It wasn’t
just a question of somebody being killed. Do you realize that the past,
starting from yesterday, has been actually abolished? If it survives
anywhere, it’s in a few solid objects with no words attached to them, like
that lump of glass there. Already we know almost literally nothing about
the Revolution and the years before the Revolution. Every record has been
destroyed or falsified, every book has been rewritten, every picture has
been repainted, every statue and street and building has been renamed,
every date has been altered. And that process is continuing day by day and
minute by minute. History has stopped. Nothing exists except an endless
present in which the Party is always right. I know, of course, that the
past is falsified, but it would never be possible for me to prove it, even
when I did the falsification myself. After the thing is done, no evidence
ever remains. The only evidence is inside my own mind, and I don’t know
with any certainty that any other human being shares my memories. Just in
that one instance, in my whole life, I did possess actual concrete evidence
after the event — years after it.’

‘And what good was that?’

‘It was no good, because I threw it away a few minutes later. But if the
same thing happened today, I should keep it.’

‘Well, I wouldn’t!’ said Julia. ‘I’m quite ready to take risks, but only
for something worth while, not for bits of old newspaper. What could you
have done with it even if you had kept it?’

‘Not much, perhaps. But it was evidence. It might have planted a few doubts
here and there, supposing that I’d dared to show it to anybody. I don’t
imagine that we can alter anything in our own lifetime. But one can imagine
little knots of resistance springing up here and there — small groups of
people banding themselves together, and gradually growing, and even leaving
a few records behind, so that the next generations can carry on where we
leave off.’