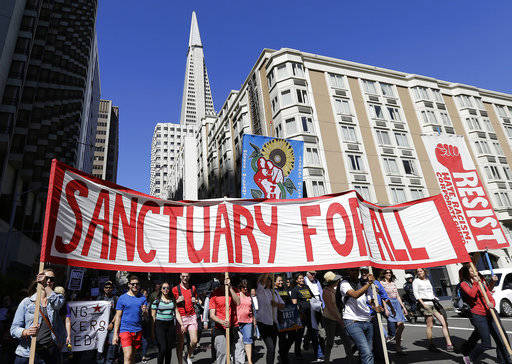 Earlier this month Nevada Attorney General Adam Laxalt joined with nine other attorneys general in filing a friend-of-the-court brief challenging a federal judge’s decision in April to block a President Trump executive order that would deny some federal funding for sanctuary cities.

The judge sided with Santa Clara County, the city of San Francisco and other jurisdictions who argued that taking away federal funds from cities that do not cooperate with federal immigration enforcement could be unconstitutional.

After the order, Trump tweeted: “First the Ninth Circuit rules against the ban & now it hits again on sanctuary cities-both ridiculous rulings. See you in the Supreme Court!”

Laxalt argued that having sanctuary cities near Nevada poses a threat to public safety.

“Sanctuary cities in California endanger Nevadans, especially given their close proximity to us,” said Laxalt in a press release. “In some cases these cities refuse federal requests to temporarily detain illegal aliens with violent criminal histories and instead release these felons into communities that — under federal law — they have no right to be in. Nevada’s Legislature, sheriffs and municipalities have wisely rejected such nonsensical policies, but Nevadans should not be the victims of such policies in other states. Opposition to this extreme form of a ‘sanctuary city’ is pro-immigrant and pro-safety, as safety is a leading concern of our immigrant communities.”

In fact, the brief itself points out that one of the states seeking to overturn the judge’s ruling, West Virginia, is near Baltimore, which has adopted sanctuary city policies and is the source of illegal drugs that spill into West Virginia.

In addition to Nevada and West Virginia, the other states involved include: Alabama, Arkansas, Louisiana, Michigan, Ohio, Oklahoma, South Carolina and Texas.

The brief also shreds the argument that denying federal funds for failing to voluntarily cooperate in immigration law enforcement is unconstitutional by pointing out the case of South Dakota v. Dole.

In that case the Supreme Court held that it is constitutional for Congress to withhold federal funds from states that failed to raise the legal drinking age to 21.

The brief also noted that — unlike another high court case, Printz v. U.S., in which the court said Congress could not force states to conduct gun background checks — the executive order does not require states to assist in enforcing immigration law, but merely prevents states from prohibiting local law enforcement from cooperating voluntarily with the federal government.

Laxalt’s press release notes that all 17 currently elected county sheriffs have consistently opposed sanctuary city policies and that in the vast majority of cases an individual must be arrested for committing a crime and booked into a jail before Nevada lawmen notify immigration authorities.

We applaud the attorney general for sticking up for the rule of law and public safety, at negligible cost to the taxpayers of Nevada.