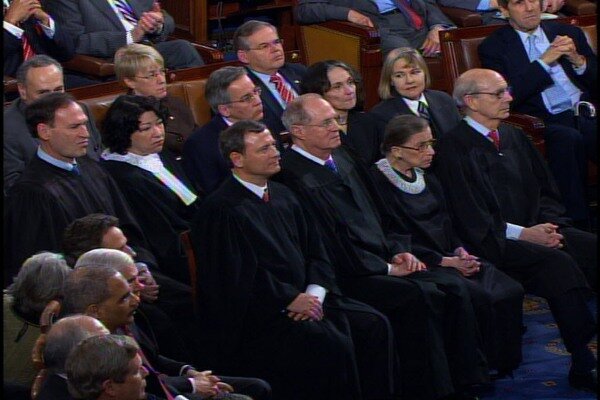 Democrats keep pounding on a solution in search of a problem.

In January of 2010 the Supreme Court held that it is unconstitutional to prohibit political campaign spending by corporations and unions. In the case of Citizens United v. FEC the court struck down a law under which the Federal Election Commission barred the airing of a movie produced by Citizens United that was critical of then-presidential candidate Hillary Clinton.

Within the week, in his first State of the Union address to Congress, President Obama lambasted the justices to their faces, saying the court had reversed a century of law. “I don’t think American elections should be bankrolled by America’s most powerful interests or, worse, by foreign entities,” he said. “They should be decided by the American people. And I urge Democrats and Republicans to pass a bill that helps correct some of these problems.”

During her losing campaign against Donald Trump, Clinton said she would consider supporting a constitutional amendment to overturn the Citizens United decision to “prevent the abuse of our political system by excessive amounts of money …” even though she outspent Trump by two-to-one, $1.2 billion to $600 million.

In 2014 every Democrat present on the floor of the Senate voted to pass a constitutional amendment that would have empowered Congress and the states to pass laws abridging the freedom of political speech.

Nevada’s long-serving Democratic Sen. Harry Reid argued in favor of that amendment, saying “the flood of special interest money into our American democracy is one of the greatest threats our system of government has ever faced.”

His successor, Democrat Catherine Cortez Masto, has taken up the cudgel, also calling for a constitutional amendment. “The U.S. Constitution puts democratic power in the hands of the American people — not corporations or private companies,” she said. “Since the Citizens United decision, big corporations have gained unprecedented influence over elections and our country’s political process. I am proud to be a cosponsor of this legislation; it’s critical that we end unlimited corporate contributions if we are going to have a democratic process and government that will truly work for all Americans.”

Newly elected Democratic Congresswoman Jacky Rosen stated shortly after her election, “Washington hasn’t been listening to the concerns of Southern Nevada because unlimited dark money flooding our elections is drowning out the voices of real people in our community.”

The Democrats in the Nevada Legislature also waded in with a resolution urging Congress to overturn Citizens united. It passed without a single Republican vote.

First, the Democrats are wrong on principle. The fact that an expenditure is coming from a group instead of an individual does not negate the First Amendment guarantee of the freedom of expression by prohibiting Congress from restricting the press or the rights of individuals to speak freely, because it also guarantees the right of citizens to assemble peaceably and to petition their government.

An assembly is not just a crowd of people on the street, it is also an organization, a corporation or a union.

Second, their premise that excessive spending overwhelms and subverts the system is demonstrably wrong.

Not only does the spending gap between Clinton and Trump demonstrate the fallacy, but just this past week an obscure special election for a House seat in Georgia underscored the error of their rationale.

In that race Democrat Jon Ossoff outspent his Republican opponent Karen Handel by seven-to-one and still lost by 4 points.

Even when all the third party money is accounted for, spending in support of Ossoff amounted to $30 million, compared to $21 million for Handel.

The Democrats are not only losing elections, but are losing the argument about the effectiveness of the influence of outside money. Being able to spend your own money on political speech is a fundamental aspect of free speech, but the ability to buy repeated messages does nothing to increase the persuasiveness of those messages.

The fundamental principle of democracy is that voters can listen to the free and unencumbered debate and discern what is best for themselves and the generations to come. To deny that is to deny and denigrate the foundation of this nation.