Well that should settle that piece of politically inspired legislation.

According to the morning newspaper, Gov. Brian Sandoval told a Reno radio station Monday he does not support creating a general counsel to legally represent agencies such as the Gaming Control Board and remove the office of attorney general from that role. Sounds like a promise to veto.

The proposal is contained in Assembly Bill 513, which was put forward by Democratic Assemblywoman Maggie Carlton of Las Vegas in response to learning that the head of the Gaming Control Board, A.G. Burnett, had secretly recorded a conversation with Attorney General Adam Laxalt, in which Laxalt asked Burnett to consider filing an amicus brief in a private civil lawsuit involving casino and newspaper owner Sheldon Adelson.

Burnett declined Laxalt’s request, and the lawsuit has since been settled.

A transcript of the conversion given to the Legislature shows Laxalt, a Republican who is contemplating running for governor, arguing his purpose was to protect the confidentiality of state gaming records.

When the matter first surfaced as a political issue, Fox News reported that Carlton and another assemblywoman released a joint statement saying, “Attorney General Adam Laxalt’s attempt to pressure the Nevada Gaming Control Board to interfere in a private civil lawsuit involving a gaming licensee, with whom he has longstanding connections, is unsettling. … Records obtained by legislative subpoena suggest that the Attorney General has created a conflict of interest and that he should not continue to serve as counsel to the Gaming Control Board.” 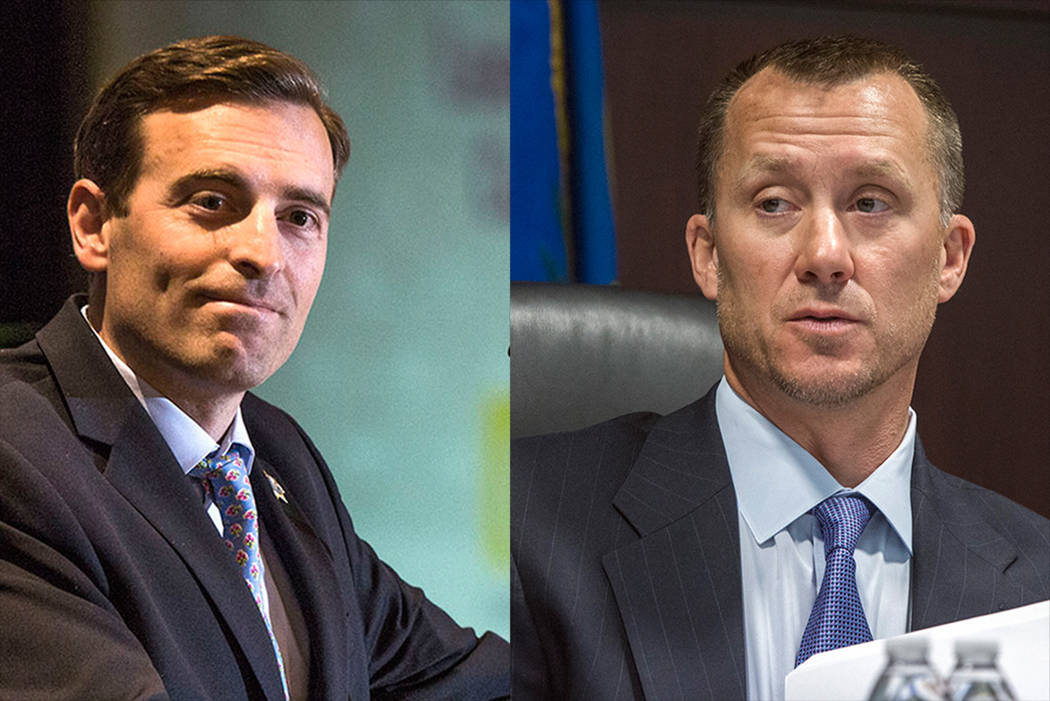 “Nearly every outside independent analyst has recognized how partisan this Legislature has become,” the office said in a statement obtained by Fox News.  “Today’s news proves the point — Nevada’s Democrat politicians will stop at nothing — including twisting and politicizing a routine action that previous attorneys general, including Catherine Cortez Masto, have taken. We look forward to exposing this for what it is: a political attack designed to distract from the Democrats’ radical agenda that harms Nevada’s working families.”

Both Laxalt and Burnett were asked about their conversation during a joint legislative committee meeting this past week and both talked about protecting confidential gaming records. Burnett said he thought the matter was settled. He had turned the recording over to the FBI, which found no criminal wrongdoing.

Sandoval told the Las Vegas newspaper, which is owned by Adelson, “I think everybody agrees that this is an isolated incident and that there’s no need to provide for independent counsel.”
Adelson is a major contributor to Republican campaigns, including those of Laxalt and Sandoval.
Sandoval went on to add, “It was important to have that hearing. It was important to get the facts out there. But now that all the facts are out there, I think everybody understands that it’s time to move on. And as I said, having spoken with regulators, they’re comfortable with the representation they’re getting.”

There are still some lingering question about the behavior of both Laxalt and Burnett — Laxalt’s appearing to seek to gain legal footing for a contributor and Burnett’s secretly recording the conversation.

Laxalt issued a statement earlier in an attempt to explain his reason for the meeting, “The Attorney General’s Office was approached by the Sands Corporation asking us to file an amicus brief about NRS 463 — a statute that protects the confidentiality of documents submitted to the Gaming Control Board. I’ve made it a practice to personally advise and meet with my clients on a regular basis. As a Nevada statewide elected official, I also meet with constituents all the time on issues that are important to the State and our clients.”

As for Burnett, the state’s rules for professional conduct of attorneys state, “It is professional misconduct for a lawyer to: …  (c) Engage in conduct involving dishonesty, fraud, deceit or misrepresentation …”

But an online discussion by two law professors as to whether it is ethical for a lawyer to secretly record another appears to cloud issue and leave the matter as a state-by-state question:

The ethics of secret recording. Ethics codes, such as the ABA Model Rules of Professional Conduct, do not specifically address covert recording by lawyers. The secret recording of conversations potentially implicates a number of general ethical standards, however. Model Rule 8.4 states that it is “professional misconduct for a lawyer to . . . engage in conduct involving dishonesty, fraud, deceit or misrepresentation.”

In 1974 the ABA Standing Committee on Ethics and Professional Responsibility in Formal Opinion 337 prohibited secret recordings, reasoning that secret recordings would be tantamount to dishonesty or misrepresentation. The ABA affirmed this position a year later and stated that a lawyer was also ethically prohibited from directing an investigator to tape- record a conversation without the knowledge of the other party.

In the years after ABA Formal Opinion 337, many state ethics authorities followed it. Others did not, concluding that when done legally, a lawyer is ethically permitted to secretly record conversations. For example, the State Bar of Arizona Ethics Committee considered whether an investigator retained by a public defender could surreptitiously tape an interview with a potential witness “to obtain impeachment material on the witness should the testimony of the witness be different at the trial than in the interview.” In reversing an earlier opinion prohibiting secret recordings, the ethics committee in Arizona Opinion 90-02 stated, “The practicalities of the present day criminal justice system seem to be inconsistent with any continued prohibition against surreptitious recordation of a witness.”

The ABA withdrew Opinion 337 in 2001. Its current position, set forth in Formal Opinion 01-422, is that “[a] lawyer who electronically records a conversation without the knowledge of the other party or parties to the conversation does not necessarily violate the Model Rules.” As do ethics opinions from several states, the ABA opinion advises that a lawyer may not make secret recordings in violation of the law “nor falsely represent that a conversation is not being recorded.” In reaching this new position, the ABA noted that its prior position relied in part on the prohibition against the appearance of impropriety, which does not appear in the Model Rules. Further, Model Rule 4.4, dealing with “respect for rights of third persons,” proscribes “means that have no substantial purpose other than to embarrass, delay or burden a third person,” and “methods of obtaining evidence that violate the legal rights of such a person.” By implication, the ABA sees conduct that has a valid purpose and does not violate a person’s legal rights as permitted by Model Rule 4.4. Thus, prior Opinion 337 was at odds with the Model Rules. The ABA’s new position on secret recording is consistent with a growing number of state ethics opinions.

On the other hand, shouldn’t the gaming industry be squeaky clean and not have to hide behind confidentiality?