After Sunday’s big splash in which the Las Vegas newspaper delved into the “lavish” spending of the city’s tourism agency — an agency the paper’s owner has been battling for years — the paper followed up today with queries to lawmakers in Carson City about that story.

The right hand apparently not did not know what the left hand was doing.

The front page story — over the headline “GOP legislators remain silent on LVCVA spending” — quoted one Republican lawmaker as saying of the Las Vegas Convention and Visitors Authority’s spending:  “this is not in our wheelhouse. We have no authority over this, and it’s not part of our caucus priorities.”

That story quoted another lawmaker as saying the Legislature doesn’t have the authority to oversee the agency.

It also quoted Republican Gov. Brian Sandoval, who washed his hands of it, “All LVCVA governance and budgetary issues are exclusively within the jurisdiction and control of the Board and are subject to Board review, decision and comment.”

All without bothering to mention or refer to another story in the same paper a couple pages inside.

That story is about a bill that would create an inspector general’s office to investigate spending by all agencies that spending tax money, such as cities, counties, school district and, just maybe, tourism agencies.

The inside story even mentions the previous Sunday’s report about the LVCVA “spending on wine, fancy meals and other perks.”

Assembly Bill 404, sponsored by Democratic Assemblywoman Brittney Miller of Las Vegas, would create the office of inspector general, who would be appointed to a four-year term by the governor, and investigate “fraud and waste with respect to the use of public money.”

You’d think the paper would find room in the front page story to tout the effectiveness of its investigation to lead to a potential remedy. Or at least rub the bill in the faces of those shrugging off the matter. 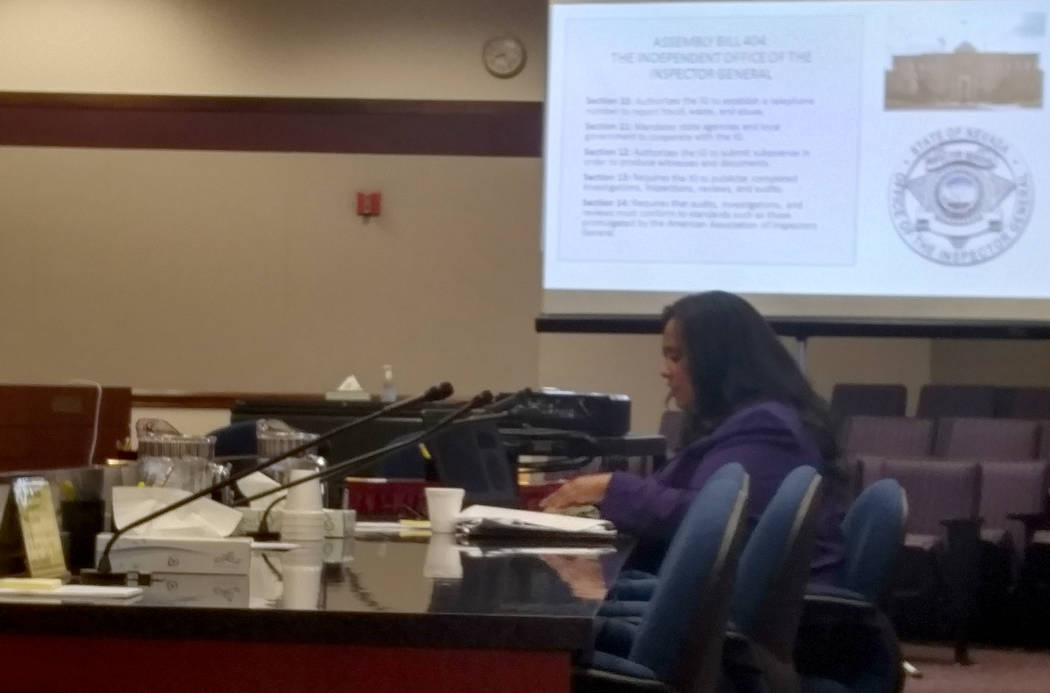 Assemblywoman Brittney Miller tells an Assembly committee about her bill to create an office of inspector general to investigate waste and fraud. (R-J pix by R-J reporter)

One comment on “Newspaper’s right hand ignores its left hand”