Nevada knows nukes, or at least we used to.

First, the election of Donald Trump reignited the debate over the possible resurrection of Yucca Mountain as a nuclear waste repository. Now, with a simple tweet Trump has reopened discussions about the preparedness, or lack thereof, of America’s nuclear arsenal.

“The United States must greatly strengthen and expand its nuclear capability until such time as the world comes to its senses regarding nukes,” Trump’s 118-character missive declared this past week.

Trump’s newly appointed spokesman Sean Spicer went on television the next day and said the president-elect was not trying to restart an arms race with Russia and China but rather deter one.

“He’s going to ensure that other countries get the message that he’s not going to sit back and allow that,” Spicer told NBC. “And what’s going to happen is they will come to their senses, and we will all be just fine.”

This would be a sharp reversal of Obama’s avowed policy of avoiding nuclear proliferation. In 2009 he called for the U.S. to lead efforts to rid the world of nuclear weapons — putting the Genie back in the bottle as some might say.

Between the U.S., Russia, China and a handful of other nations there are already enough nuclear weapons to make the rubble bounce, as we used to say, and enough to create a Nuclear Winter. (And Obama says the biggest threat to mankind is global warming.)

Nevada was ground zero for nuclear preparedness throughout the Cold War. On a 1,375-square-mile tract of land in Nye County known first as the Nevada Proving Grounds, then the Nevada Test Site and now the Nevada National Security Site (NNSS), thousands of workers developed the nation’s nuclear deterrence capabilities by detonating more than 900 nuclear devices. A few workers there continue to experiment with subatomic tests.

With most of the nation’s nuclear arsenal sitting on the shelf for decades, NNSS would be the logical location for testing, refitting, overhauling, updating and replacing those weapons.

But Yucca Mountain and nearby Groom Lake, or Area 51 — where stealth aircraft and other top secret weaponry have been tested for decades — could also play a role. 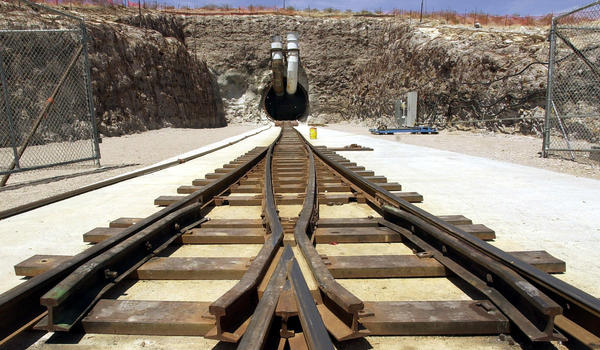 Instead of dumping commercial nuclear reactor waste at Yucca Mountain, it could be reprocessed, as many other nations do.

But in 1977 Jimmy Carter banned reprocessing because it creates weapons-grade nuclear material and he feared a nuclear proliferation and potential for that material to be obtained by terrorists or a rogue state, which has never happened, though Great Britain, France, Japan and others routinely reprocess.

That weapons-grade material from reprocessing could be used to update the arsenal and the reprocessed fuel could power commercial nuclear reactors for years and drastically reduce the amount of waste.

The nation’s offensive and defensive efforts under Obama have lain fallow. The three Nevada sites could be employed to do more than merely deter sane nations with a policy of mutually assured destruction — appropriately summed up with the acronym MAD.

Research and development could be directed toward deploying reliable countermeasures against an ICBM attack from an orbit over the South Pole, which was not envisioned back in the day of Ronald Reagan’s Strategic Defense Initiative. And it need not be just anti-ballistic missile technology.

Little has been done in recent years to harden the nation’s electric grid and electronic technology against the disabling power of the electromagnetic pulse (EMP) that is generated by a nuclear weapon, which could leave the entire nation in the dark, without communications or operational vehicles. That could come from terrorists or one of those rogue dictatorships that have or are developing nuclear devices, not just Russia and China.

Research also needs to continue on electronic rail guns that could target incoming missiles, as well as EMP or laser or X-ray weapons that use a small nuclear detonation as a source of energy — ground- or space-based.

Nevada has the infrastructure in place already, though most of the worker expertise has moved on or died off. The state’s universities and the Desert Research Institute could be called upon to educate the necessary workforce, as well as the various nuclear labs around the country that have seen personnel laid off and budgets cut.

Nevada has long contributed to national defense, it could continue to do so.

4 comments on “Newspaper column: Nevada could contribute to rebound of national defense”