There have been three special legislative sessions in three years in Nevada specifically to dole out generous gifts to billionaires based on base assumptions that those gifts might someday prove beneficial to the economy of the state and generate more tax revenue than the handout.

You know the gifts — tax breaks and abatements and roadwork and land for a Tesla Motors battery factory near Sparks, tax breaks and infrastructure for a planned electric car plant for Faraday Future in Clark County and now $750 million in tax money to build a football stadium for casino and newspaper owner Sheldon Adelson and the NFL Raiders.

So, how’s that first handout working out?

Montana Skeptic at Seeking Alpha reports that Nevada is getting the shaft.

As of the latest report in late August, even with generous amortization allowances, the 272 jobs created by the so called gigafactory have cost Nevada $179,000 each.

Tesla has said the $5 billion, 10 million-square-foot factory eventually will employ 6,500 workers and add $100 billion to the state economy over the next 20 years.

The plant is supposed to be 10 million square feet in size, but now is less than 2 million. 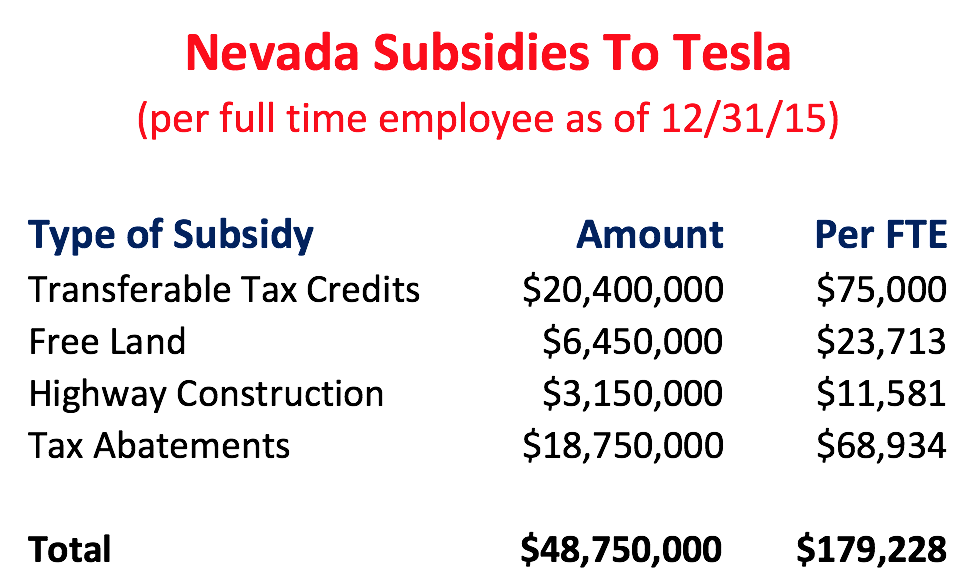 8 comments on “How is that first special session gift — the one for Tesla — turning out?”