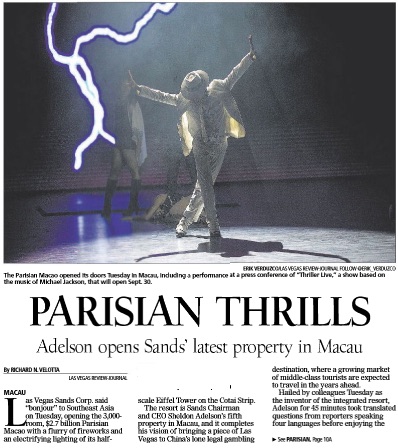 On Sunday the Las Vegas newspaper had a story and photo covering three-quarters of the Business section cover advancing the Tuesday opening of a 3,000-room hotel-casino called Parisian in Macau, 7,300 miles from the hotel-casinos in Las Vegas.

On Tuesday the paper had a front page story and photo about the opening of the Parisian that day, talking about the marketing for the $2.7 billion property.

Today, the paper has a front page story and photo about the opening, gushing:

The resort is Sands Chairman and CEO Sheldon Adelson’s fifth property in Macau, and it completes his vision of bringing a piece of Las Vegas to China’s lone legal gambling destination, where a growing market of middle-class tourists are expected to travel in the years ahead.

Hailed by colleagues Tuesday as the inventor of the integrated resort, Adelson for 45 minutes took translated questions from reporters speaking four languages before enjoying the high-octane opening ceremony and a VIP dinner to celebrate the newest addition to China’s version of the Strip.

Adelson, accompanied by his wife, Miriam, walked onstage with Rob Goldstein, president and chief operating officer of Las Vegas Sands, and Wilfred Wong, president of Sands China Ltd., the company that operates the company’s Macau holdings. The three executives took questions from the nearly 800 reporters who traveled to Macau for the opening.

There was a sidebar on the front page about the nearby $4.2 billion Wynn Palace.

I can’t wait for the front page story Thursday detailing all the restaurants and their exquisite cuisine.

You’d think the owner of the Parisian had an inside track to the management at the newspaper for it to send a reporter and photographer all that way for a ceremonial opening. 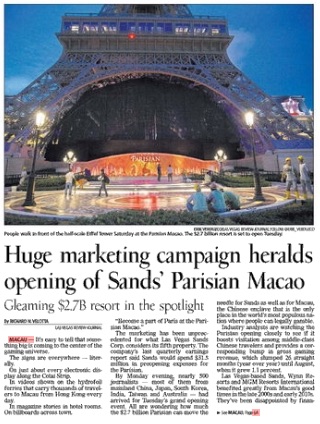 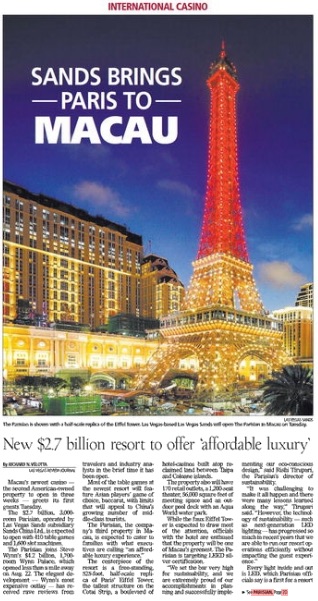 Apparently no one handling the newspaper’s website got the memo. There is no mention of the Parisian on the online cover page. You have to go the “Today’s Headlines” link to find the stories.

(Headline hint for the aphorism deprived: Newcastle Upon Tyne in England was the nation’s first coal exporting port and was well-known as a coal mining center since the Middle Ages. “Carrying coals to Newcastle” was deemed a pointless activity, since there already was plenty of coal there.)