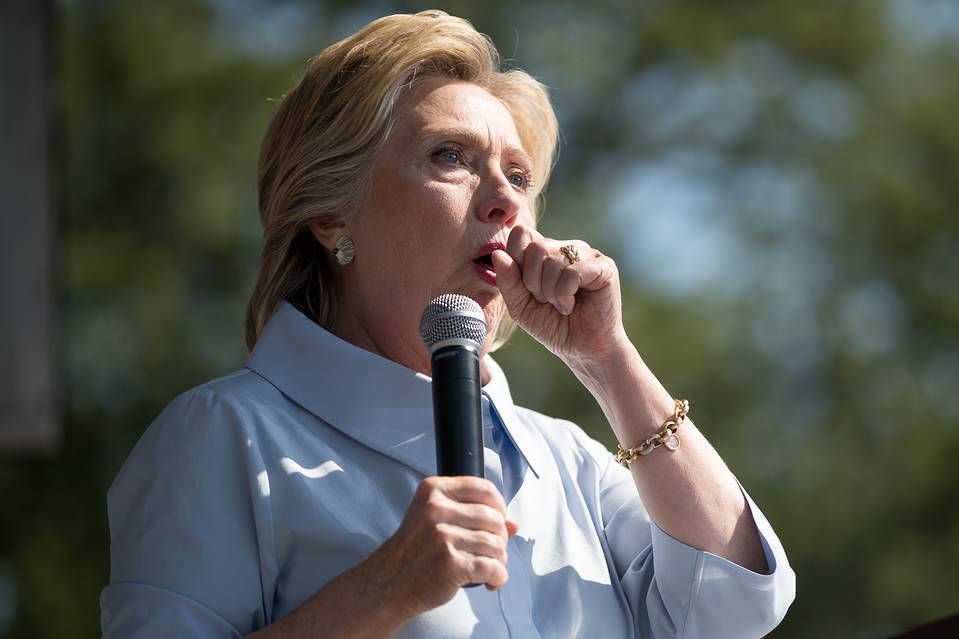 Clinton coughing during a recent speech. (AP photo via WSJ)

She is trying to have it both ways.

Hillary Clinton told the FBI she could not recall briefings about classified information due to a concussion she had in 2012.

The FBI report said, “However, in December of 2012, Clinton suffered a concussion and then around the New Year had a blood clot (in her head). Based on her doctor’s advice, she could only work at State for a few hours a day and could not recall every briefing she received.”

But now Clinton’s surrogates are attacking the news media for deigning to question her health after she experienced a four-minute coughing spasm at a recent speech and another aboard an airplane while being questioned by reporters.

“They’re trying to work the refs a little bit as they try to push back on the mainstream media’s willingness to pick up on some of this stuff that’s usually left to the fringes,” Clinton surrogate and former Harry Reid mouthpiece Jim Manley said of the efforts.

The Hill said the campaign intends to counterattack news media who even dare to take seriously questions about her health.

A number of conservative outlets have raised the issue of her health, but Manley said the campaign fears the issue is “bleeding to the mainstream media.”

Which is funny, since The Wall Street Journal’s James Taranto just pointed out that media are trying to tamp down the story.

“Hillary Clinton is in excellent health, so shut up: That’s a summary of the media narrative that emerged last month after Donald Trump questioned whether Mrs. Clinton has ‘mental and physical stamina.’ A Puffington Host headline proposed: ‘Let’s Call The Conspiracy Theories About Hillary’s Health What They Are.’ What are they? You guessed it: ‘The subtext of the rumors spouted by Trump and his crew of armchair doctors is clear: [Mrs.] Clinton is biologically unfit to lead,’ asserted senior reporter Melissa Jeltsen,” Taranto writes. ‘She’s a woman, after all.’”

The WSJ columnist reports mainstream media headlines have included the Washington Post’s “Armed With Junk Science and Old Photos, Critics Question #HillarysHealth,” The New Yorker’s “The Far Right’s Obsession With Hillary’s Health” and the Atlantic’s “Questions About Hillary’s Health: The Birtherism of 2016.”

But a former Clinton aide told The Hill, “I think that the fact that any mainstream publications would do anything but make this is a story about Donald Trump is completely out of the mainstream and why these claims have gotten worse. …

“The fact of the matter is there is no truth or factual evidence to debunk,” the former aide continued. “She is perfectly healthy. The only way is to challenge him to a pushup contest at the first debate.”

The website WND, admittedly not mainstream, has tracked down a number of doctors willing to diagnose Hillary from afar and call for her to release health records.

Typical were the comments of Dr. Gerard Gianoli of Tulane University:

“What do we know about Mrs. Clinton’s health? We know that she has suffered two deep vein thromboses and an episode of cerebral venous thrombosis. Blood spontaneously clotting within one’s veins on three separate occasions is not a good thing. In fact, it is life-threatening. This tells us that she has a hypercoagulable state requiring the use of Coumadin (a ‘blood thinner’) for the rest of her life to try to prevent this from happening again. While Coumadin may prevent future blood clots, it can also lead to life-threatening hemorrhage if she has any future trauma.

“We also know that she suffered a concussion and, according to her husband, she took 6 months to recover. How do we know she recovered? If she was a high school athlete, she would have had mandatory neuropsychological testing before being allowed to participate in sports again. Given that being the leader of the free world is more important than playing goalie for the local high school, why is the mainstream media not demanding to see Mrs. Clinton’s post-concussion testing?”

45 comments on “How well are the mainstream media covering questions about Hillary’s health?”