That Washington Post story on the front page of today’s Las Vegas newspaper about an Iranian scientist being executed was trimmed before getting to a rather politically interesting aspect.

What you did not read in the local paper was that the scientist, Shahram Amiri, had been mentioned in an email on Hillary Clinton’s server and that email was made public this past year. The section left on the cutting room floor, the last two paragraphs, reads:

Amiri appeared to be mentioned in emails released last year by Clinton as part of investigations into her use of a private server while she was secretary of state. An email forwarded to Clinton on July 5, 2010 — nine days before Amiri returned to Tehran — apparently refers to Amiri’s case.

“We have a diplomatic, ‘psychological’ issue, not a legal one. Our friend has to be given a way out,” wrote Richard Morningstar, who was then a State Department special envoy for Eurasian energy affairs. “We should recognize his concerns and frame it in terms of a misunderstanding with no malevolent intent and that we will make sure there is no recurrence.”

Apparently being a “friend” of the United States is a capital offense in Iran.

The Guardian story was more to the point:

The release of Clinton’s emails last year by the State Department appeared to have been damning for Amiri. A number of emails sent to the then secretary of state appeared to support claims that he was a defector. “Our friend has to be given a way out. We should recognise his concerns and frame it in terms of a misunderstanding with no malevolent intent and that we will make sure there is no recurrence. Our person won’t be able to do anything anyway. If he has to leave, so be it,” wrote one senior official to Clinton, according to CNN.

“Following the reported revelations in the Clinton emails, Amiri was executed for spying,” said Dina Esfandiary, MacArthur fellow at the centre for science and security studies at King’s College London. “In the Iranian judiciary’s mind, it’s a necessary signal to the US that Iran is aware of their activities in Iran and that this is what is done to those who help the enemy. It’s a textbook spying case.”

Republican Sen. Tom Cotton accused Clinton of being reckless with such information, according to a Washington Examiner story:

“I’m not going to comment on what he may or may not have done for the United States government, but in the emails that were on Hillary Clinton’s private server, there were conversations among her senior advisors about this gentleman,” he said on “Face the Nation.” Cotton was speaking about Shahram Amiri, who gave information to the U.S. about Iran’s nuclear program.

The senator said this lapse proves she is not capable of keeping the country safe.

“That goes to show just how reckless and careless her decision was to put that kind of highly classified information on a private server. And I think her judgment is not suited to keep this country safe,” he said.

But you’ll not read that in the local paper. 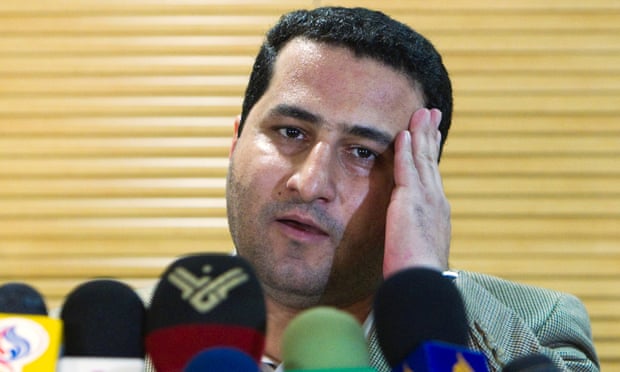 Shahram Amiri speaks to journalists after returning to Tehran in July 2010. (Reuters photo)

57 comments on “All the news that fits”