With Memorial Day just beyond the weekend, President Obama spoke in Hiroshima about the atom bombing that ended World War II and saved the lives of countless Americans and Japanese.

This is the slap in the face he delivered to those veterans who are the parents and grandparents for so many Americans alive today: “Nations arise telling a story that binds people together in sacrifice and cooperation, allowing for remarkable feats. But those same stories have so often been used to oppress and dehumanize those who are different.”

Instead of a memorial, he delivers an admonishment about oppression and dehumanizing without distinguishing who did what. He recalls the devastation of Hiroshima and Nagasaki but makes no mention of Pearl Harbor — where my father was stationed at the time — or the Death March of Bataan or the Rape of Nanking or the many bloody battles across the Pacific Front.

He made a generic mention of what happened without ever mentioning who the perpetrators were and who the heroes were: “In the span of a few years, some 60 million people would die. Men, women, children, no different than us. Shot, beaten, marched, bombed, jailed, starved, gassed to death. There are many sites around the world that chronicle this war, memorials that tell stories of courage and heroism, graves and empty camps that echo of unspeakable depravity.”

He once again made a sweeping condemnation of all religions, making them out to be morally equivalent and all equally to blame: “Every great religion promises a pathway to love and peace and righteousness, and yet no religion has been spared from believers who have claimed their faith as a license to kill.”

At least when he spoke about the Hiroshima bombing President Truman mentioned the number of Japanese lives saved, “It was to spare the Japanese people from utter destruction that the ultimatum of July 26 was issued at Potsdam. Their leaders promptly rejected that ultimatum. If they do not now accept our terms they may expect a rain of ruin from the air, the like of which has never been seen on this earth. Behind this air attack will follow sea and land forces in such number that and power as they have not yet seen and with the fighting skill of which they are already well aware.”

He did not mention that the U.S. had only one more such bomb, not that those American and allied sea and land forces would have suffered huge casualties.

But Obama concluded his speech without a hint of understanding of the momentous decision that was made 71 years ago by Truman that saved countless lives and ended that unspeakable depravity:

Those who died, they are like us. Ordinary people understand this, I think. They do not want more war. They would rather that the wonders of science be focused on improving life and not eliminating it. When the choices made by nations, when the choices made by leaders, reflect this simple wisdom, then the lesson of Hiroshima is done.

The world was forever changed here, but today the children of this city will go through their day in peace. What a precious thing that is. It is worth protecting, and then extending to every child. That is a future we can choose, a future in which Hiroshima and Nagasaki are known not as the dawn of atomic warfare but as the start of our own moral awakening.

Our moral awakening? He made a sweeping indictment of humankind, ignoring the heroes who fought to save the American ideal. 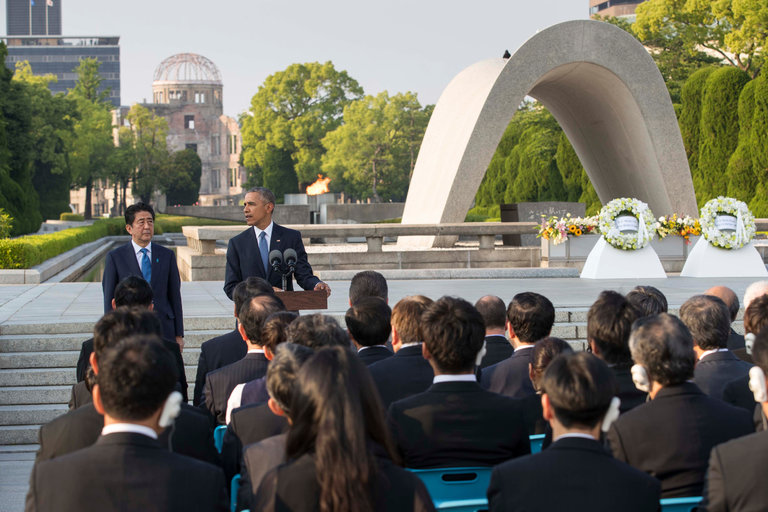